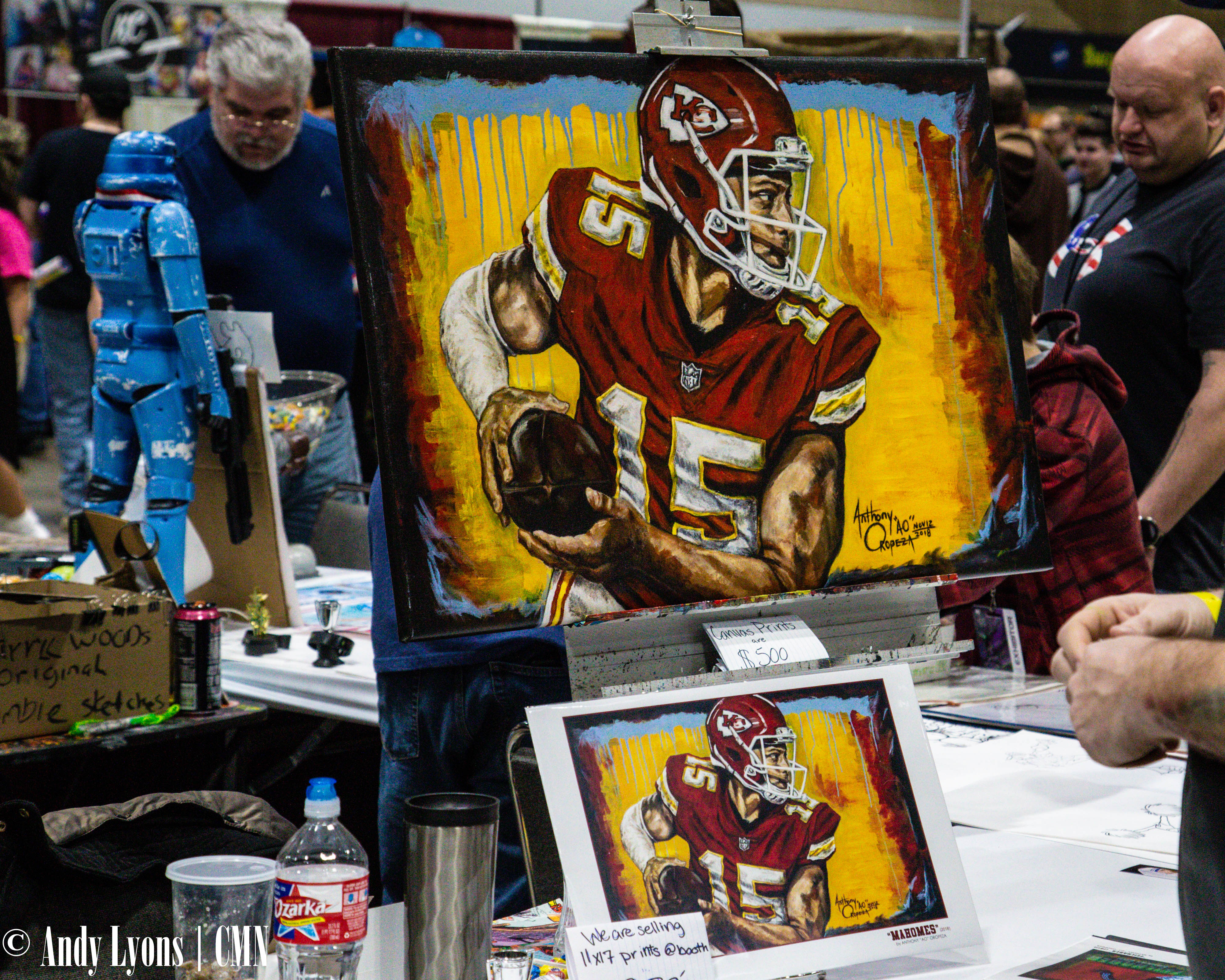 Amid the hundreds of prints of comic book icons such as Batman and Iron Man, the red and yellow of the Kansas City Chiefs stood out in Bartle Hall last weekend. Rising football star Patrick Mahomes is easily one of the most recognizable players in KC, and displayed as an art print at Planet Comicon was no exception.

Artist Anthony “AO” Oropeza had prints on display while he continued on new pieces throughout the weekend, but he took the time to explain the creation of the now iconic image.

“It became really cool,” he said of the reaction he’s gotten to the piece. “People like the work. What people don’t know is I started it preseason and it was just basically a ‘maybe’ kind of painting. We really didn’t know how great he was going to be and so I just said ‘hey, you know what, I’ll give it a shot.’ And then week by week we started getting wins and I started doing more work on it and then I said OK we got something here and I decided to finish it. Somebody out of New York wanted to purchase it, they saw it on the New York Times and then a couple days later it was theirs.”

Oropeza said he’s still working to get the piece licensed so he can sell prints without risking a cease and desist order from the NFL. However, he does limited runs or gifts them to friends and family for presents and donates the proceeds to local charities.

While working on a new Captain America piece at PCC, it was evident he was painting on wood rather than traditional canvas. Oropeza said he spoke to one of his art idols who prefers wood for the textures and the ability to glue other materials into the piece such as comic book pages.

“It just happens to do with what feels good for me,” he said. “I’m not really one of those detail sort of master Renaissance type of painters. It’s kind of raw-ish. My backgrounds are really abstract and then when it comes to the foreground, the character or the actual subject, I’m not really good at the detail detail type of stuff so I like keeping it with a lot of texture.”

Oropeza said he was born and raised in the Kansas City area, and now most of his work is done out of his basement studio. Two or three times a year he’ll participate in First Fridays or host his own show. He’s already planning one for September that will feature both sports and comic book art including some from his own comic book, “Amigoman,” which he said he made with grade schoolers in mind.