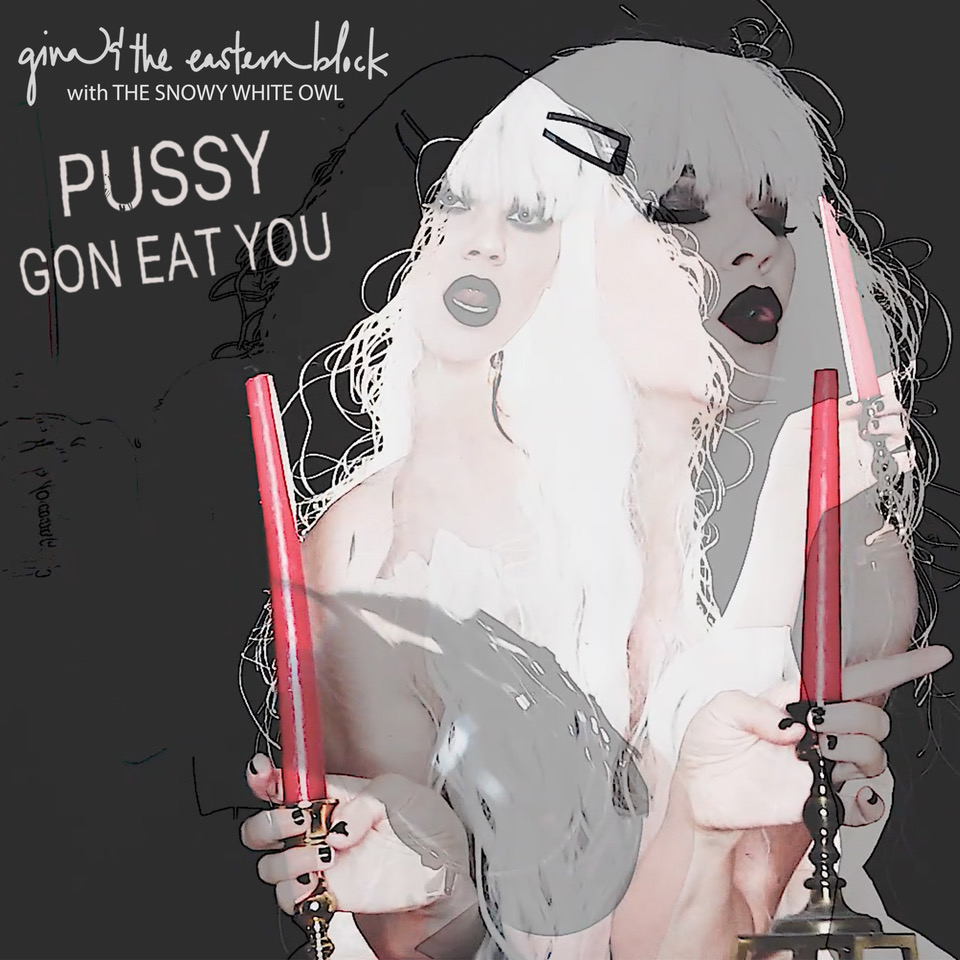 As things seem to be coming back to life, new music is leading the forefront with hits dropping nearly every day. Gina Katon and Mark Jordan, both of many talents and projects – including Gina and The Eastern Block, have been paving the way.  On behalf of CMN, I got to fumble my way through a conversation with my dear friends Gina and Marc about tracks “Bloodsucker Motherfucker” and “The Insanity” as well as their newest release, “Pussy Gon Eat Ya.” Katon, who is “Mother Nasty” to the rock n’ roll burlesque group Little Miss Nasty, dished on all things with her band Gina and the Eastern Block as well as what fans of LMN can look forward to throughout the year.

On May 7, Gina And The Eastern Block with guest producer The Snowy White Owl released their newest track, “Pussy Gon Eat Ya.” Despite  the perfect timing, the track was not about the tiger lost in Houston. From the mind of vocalist Gina Katon and produced by Marc Jordan and the “very mysterious” The Snowy White Owl, “Pussy Gon Eat You” is yet another track that shows Gina is all about the sexy and not afraid to sing about it.

Not hiding behind innuendo, the lyrics are straight forward and very sexual, alluding to the power and need of a women’s sexuality. A very interesting twist on a love song, “Pussy Gon Eat You ” is accompanied with a video directed by Katon and Jordan, while also starring Katon and the contortionist Brynn Route. The track has a very industrial sound, almost like a steel manufacturing plant sound as Katon lays her unique vocal stylings over a calming but haunting erotic music build up, and then erupts in your face with a hard hitting chorus supported by heavy guitars and even harder hitting drums as Katon lets her rock vocals come alive and adds a hint of her growl. “Pussy Gon Eat You” might not be a song you sing running the kids carpool but it will be a song you get sweaty to on the dance floor.

The video might introduce you to Los Angeles based contortionist, performer and instructor Brynn Route who has done work with Korn, Smashing Pumpkins and Papa Roach to name a few, Katon said she was honored to have Route “be a part” of the video. Route adds a double layer of elegance and sexy joining Katon in scantily clad attire as they show how naughty and power go hand and hand. They play very well off each other in imagery as the video uses religious symbolism to add to the “taboo” mindset of being closed off about sex.

“Pussy Gone Eat You” is Gina and the Eastern Block’s follow up to their track “The Insanity,” an eerie look inside the mind of anxiety in a time when it is nice to know you are not feeling it alone and gives us Jordan’s acting premiere. Along With “Bloodsucker, Motherfucker,” Jordan discussed his plan to release a new track every few months as opposed to a full length album to help keep minds fresh.

We also  talked about the next release for Little Miss Nasty, following their debut “Hungry.” Their next release will be hitting the airwaves on June 18 titled “L.I.T.T.L.E  M.I.S.S  N.A.S.T.Y” which will highlight Katon’s love for “old school” hip hop. She described channeling the influence of rap icons, saying with a giggle she and fellow LMN member Sofia are “the new version of Salt N’ Pepa” and bringing that old school vibe. Katon introduced LMN members Sophia, Dina, and Talitha as well as revealing plans for new residencies in Las Vegas and Los Angeles and throughout California.

For more, follow Gina and The Eastern Block on Facebook here. Listen to Metal Head Cosa’s interview with Katon and Jordan in its entirety below via SoundCloud.