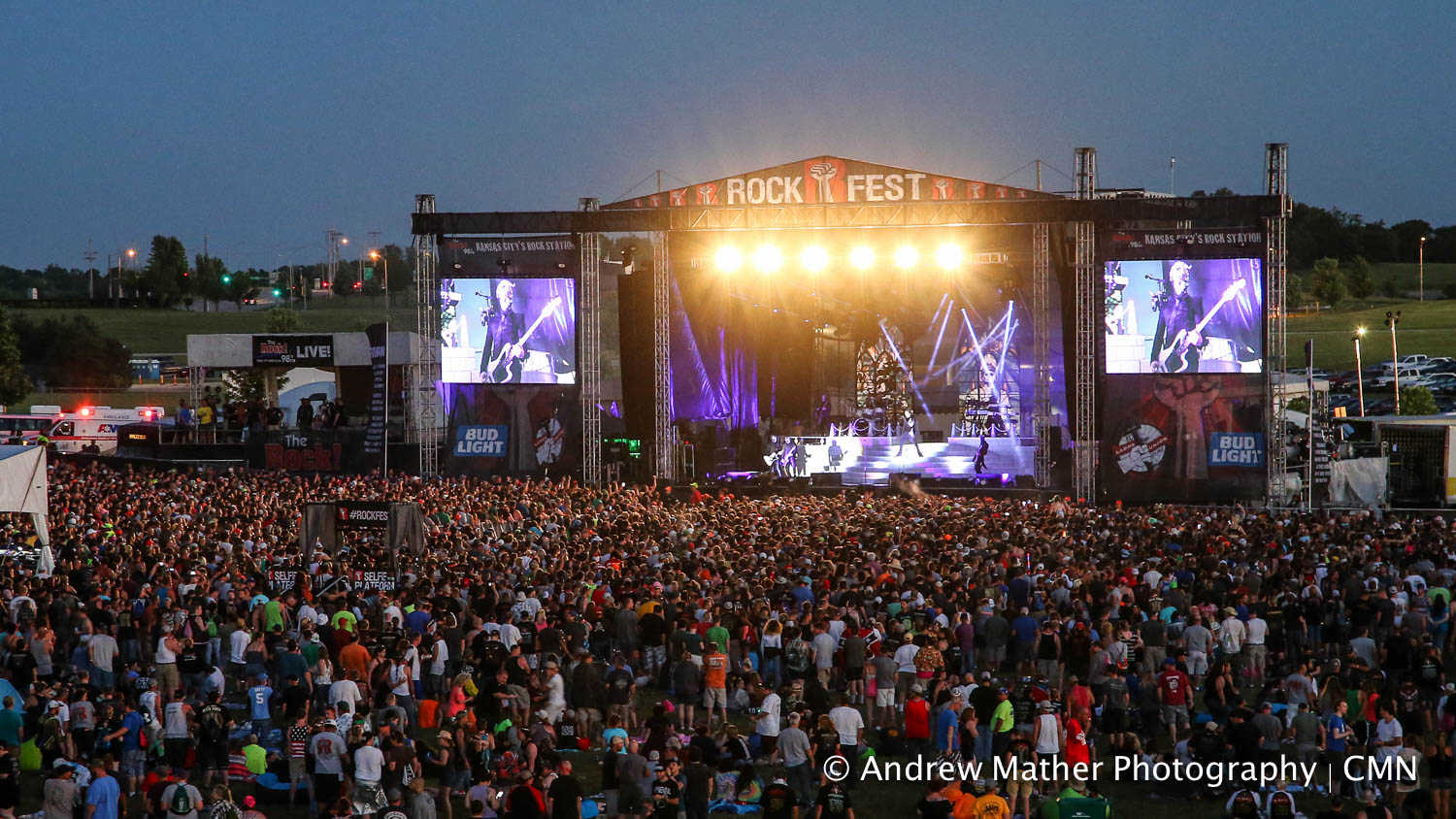 On Saturday, June 2 at the Kansas Speedway in Kansas City, Kansas, the stars aligned and the rock gods brought forth the 26th annual Kansas City Rockfest. Billed as the largest one-day festival in the country with 16 bands, two stages, 12 hours of rocking, and more than 30,000 in attendance, it was nothing short of spectacular.

This was my fifth Rockfest and I only know one perspective. As I enter the gates I find my spot on the rail – on the main stage this year – and don’t move until the headliner wraps up the night.

Starting the show was Kansas City locals Hyborian on the Worth Harley-Davidson stage. Thanks to two big screens on both sides of the Kansas City Labor Union Main stage, we were able to see and hear them have no problem setting the tone for the day with their Mastodon-ish style sound.

The official kick off was, however, on the KC Labor Union main stage. The U.S. Army Color Guard marched their way onto the stage, flying the American flag accompanied by the guitar styling of young virtuoso Aiden Fisher. Fisher played a beautiful, pride-filled version of the national anthem and set the crowd on fire as they chanted “U.S.A.” and screams of “thank you” rang through the air; as always, a truly moving experience. 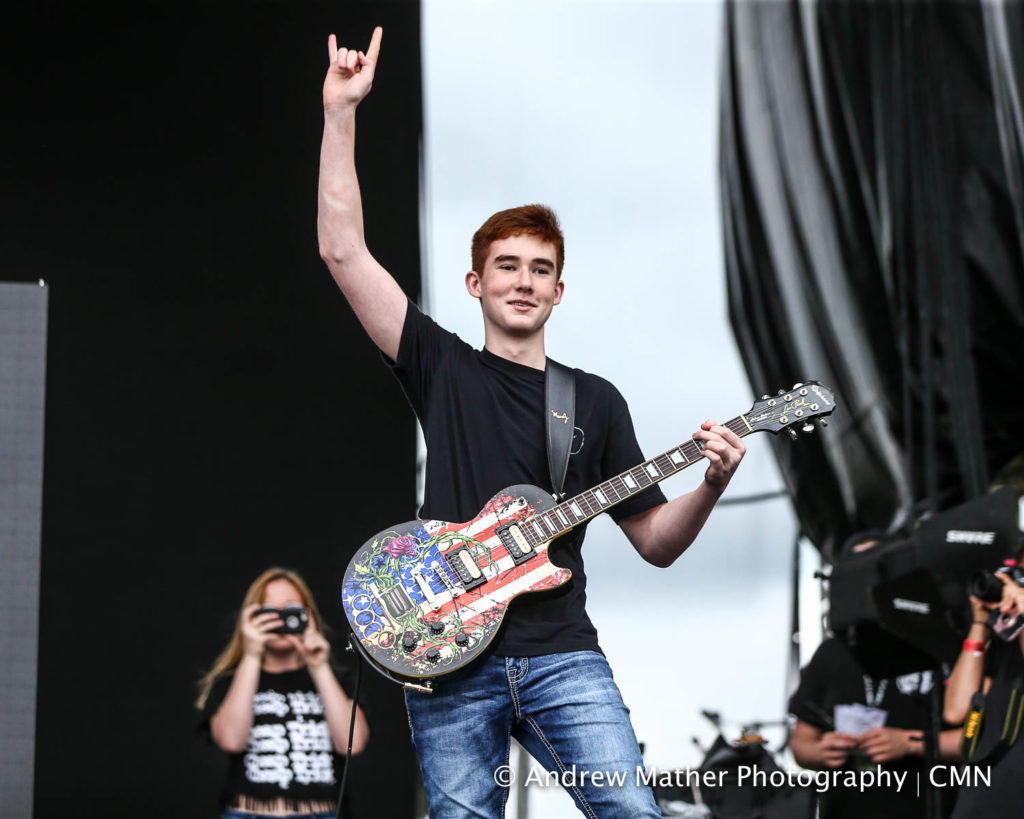 The Labor Union main stage then wasted no time and got right into the rock with Ohio-based Red Sun Rising. At such a big festival, bands are limited to short sets, especially the early acts, so it’s pivotal for them to make an impression right off the bat. Red Sun Rising took that to heart and came out jamming, catching just the right groove to get the crowd swaying, dancing and jumping. The group made sure to play their hits “Emotionless” and “The Otherside” as well as the single “Deathwish” off the new album, “Thread.”

Jefferson City, Missouri-based country rockers Shaman’s Harvest was up next on the Worth Stage to take the reins and keep the crowd pumped up and moving.

One thing I notice most about festivals is the crowd changes from band to band, and each band brings forth a different neighborhood.

I Prevail from Detroit was the next on main stage, and with their mixture of clean and harsh vocals from their two singers, Burkheiser and Vanlerberghe, brought a neighborhood of fans ready to jam. With the start of large mosh pits and a sea of crowd surfers, you could tell they were getting the crowd ramped to lose their minds. 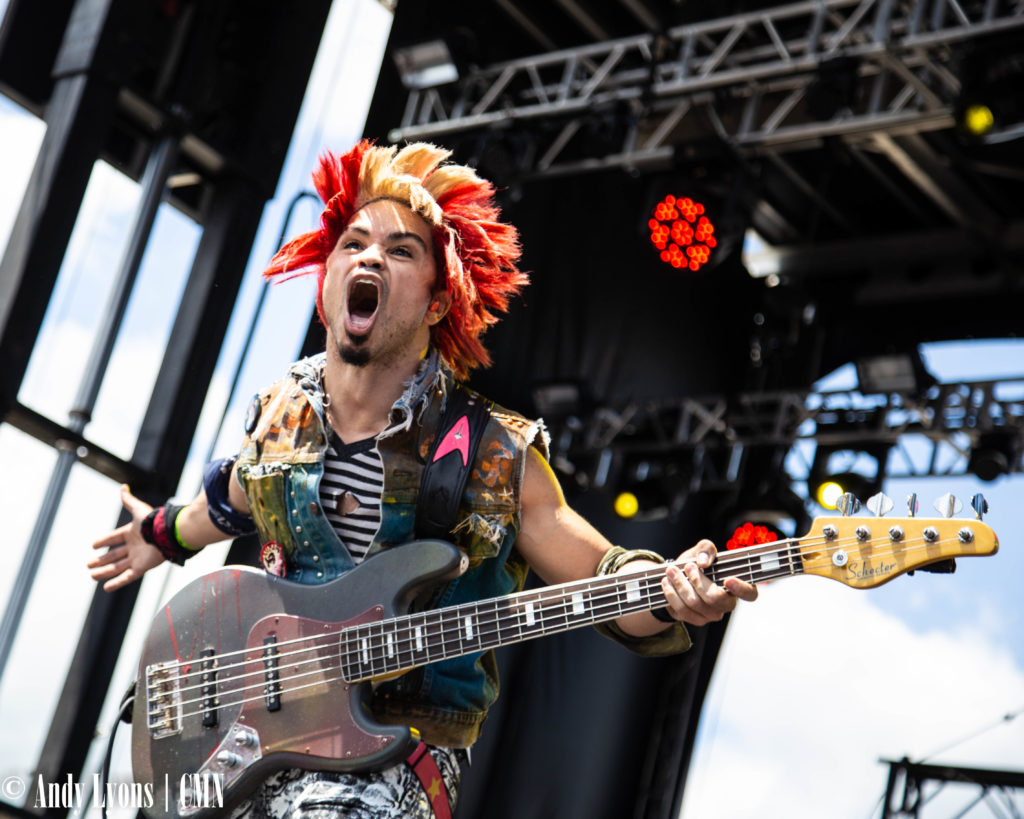 Veteran band Powerman 5000 was up next and I have to say, along with their simple-recipe hard rock sound, their bass player Murv Douglas is just plain fun to watch. They have “rocking a stage” down. Spider, lead vocalist and younger brother of Rob Zombie, shows frontman talent runs in the family.

This review would be too long if I went into detail about every band that played, but I have to make special note of one of my favorite bands, and what I call arguably one of the greatest bands in all the land: Sevendust. They bring a special, powerful and passionate flavor with their heavy metal groove style and always stand out in any lineup.

Rocking high on the early success of the new album “All I See Is War,” and lead vocalist Lajon Witherspoon feeling the power of being back home, Sevendust brought “it” to Rockfest. They had the thousands in attendance all bouncing and feeling the love that is Sevendust, especially when they brought out Lajon and guitarist Clint Lowery’s kids on to the stage to share in the jams and love.

Miss May I was next on the Worth Stage, followed by L.A.-based band Bad Wolves, who are having extraordinary success after their hit cover of the Cranberries classic song “Zombie.”

Next on the Worth Stage was fellow L.A.-based band Butcher Babies. Making a quick stop from their “King and Queens Tour,” and feeling the groove of their latest release, “Lilith,” the Butcher Babies came to melt faces. They are perfect for festivals with their mosh pit-style music and encouragement of crowd surfing and high fiving.

Closing out and co-headlining the Worth Stage was hard-hitting native powerhouse band Of Mice & Men and Tampa, Florida’s own Underoath. Two bands big enough to rock a fest on their own shared the Worth Stage, leaving it all out there and giving fans everything they want from a metal show.

In between the great bands of the Worth Stage we were thoroughly entertained by the acts on the Labor Union Main Stage. Following Sevendust we had the decade of decadence poster child and Motley Crue front man himself, Vince Neil. Neil, with his stellar band, rocked all the classic Crue hits you’d expect and hope for. Despite what some called a lackluster performance at Rocklahoma, Neil, although showing a few cardio issues, still brought killer tracks back to life and had fans that didn’t know him want to get to know him. 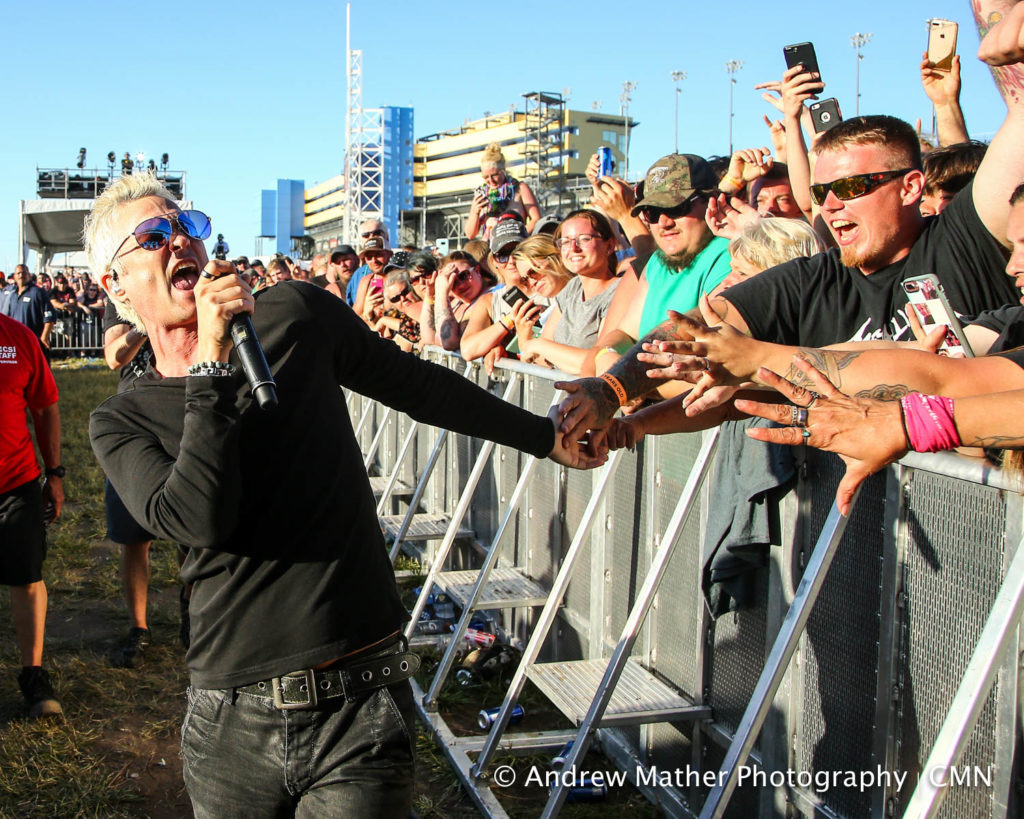 Next was the beloved Stone Temple Pilots, bringing with them new singer Jeff Gutt. You can’t listen to STP without missing original vocalist Scott Weiland, but Gutt does a great job of filling a big role, bringing back to life all the classics with respect and a flare Weiland would be proud of. STP also came with new tracks off their latest self-titled release, and first studio album with Gutt, including the latest hit single “Never Enough.”

As the night was setting in and the excitement rising, the crowd was a buzz of energy and anticipation as the co-headliner and self-proclaimed devil-worshiping ministry took the stage: the band Ghost. With hymns that glorify the glamorous, the disgusting, and the sacrilegious, the Nameless Ghouls and “new” frontman Cardinal Copia brought an almost preacher-esque style show with their “black metal” music and full-masked musicians.

A perfect pick for the lineup, Ghost put on a very entertaining show with great music and dark overtone that left you thoroughly corrupted. Ghost did a perfect job of setting up for the main stage headliner.

Few bands have reached the success or staying power of the aggressive and in-your-face metal sound of headliner Five Finger Death Punch. Few bands polarize and have such a love-hate relationship from rock music fans like FFDP. Even fewer bands have been as open with the struggles of the accessibility of excess that comes from success like FFDP.

It was great to see lead singer Ivan Moody up front looking strong and passionate with the rest of FFDP and they didn’t disappoint. Slaying with all their fan favorites, FFDP had the crowd enthralled and engaged, bouncing the entire set and giving fans no choice but to slam, mosh, crowd surf and go nuts. 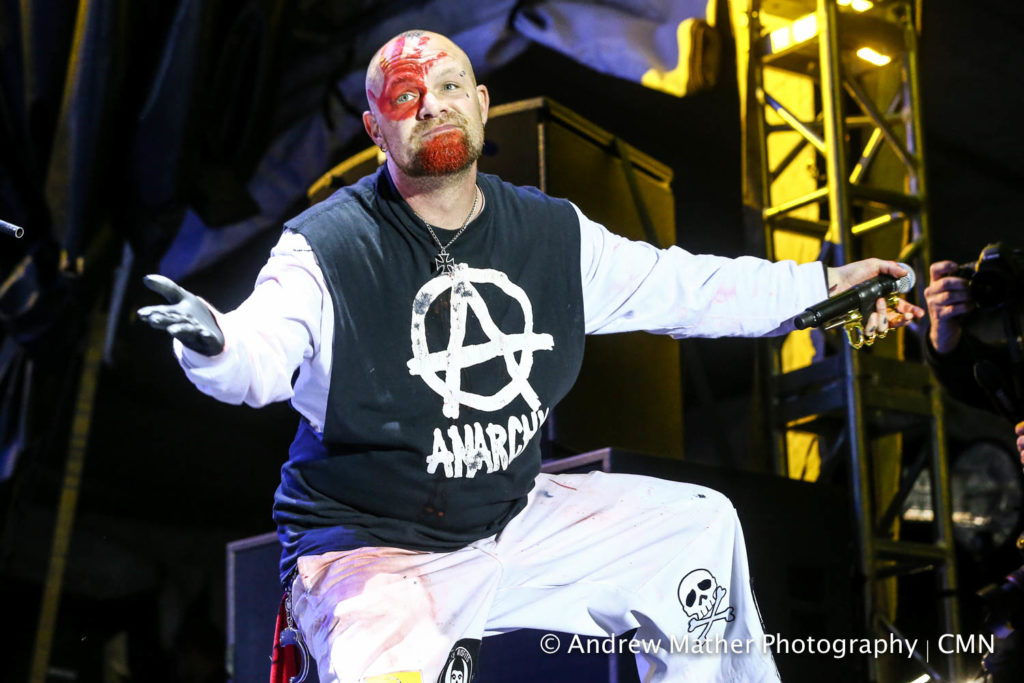 FFDP showed their softer side by bringing up several kids from the crowd to sing along on “Remember Everything” and adorn with gifts. Another moving moment happened when Moody addressed his struggles with sobriety and appreciation for the strength from the fans that is helping him deal. He announced he wanted to give his signature bat to another person that was dealing with sobriety and gave it to a fan on 14 days.

It was a great heavy metal, hair-throwing set that was a perfect close to a fantastic lineup. After the set, Ivan came down to the rail and shook hands, took pics, and kissed babies, again showing his love for the fans.

The 26th annual KC Rockfest, with perfect weather, rowdy crowd, talented rocking lineup, hardworking staff and great rail guards, was everything you want and need in a one-day rock festival. I wouldn’t give back one minute of my 13-hour rail campout for anything, and there is no doubt I’ll be back in my spot next year for the 27th.