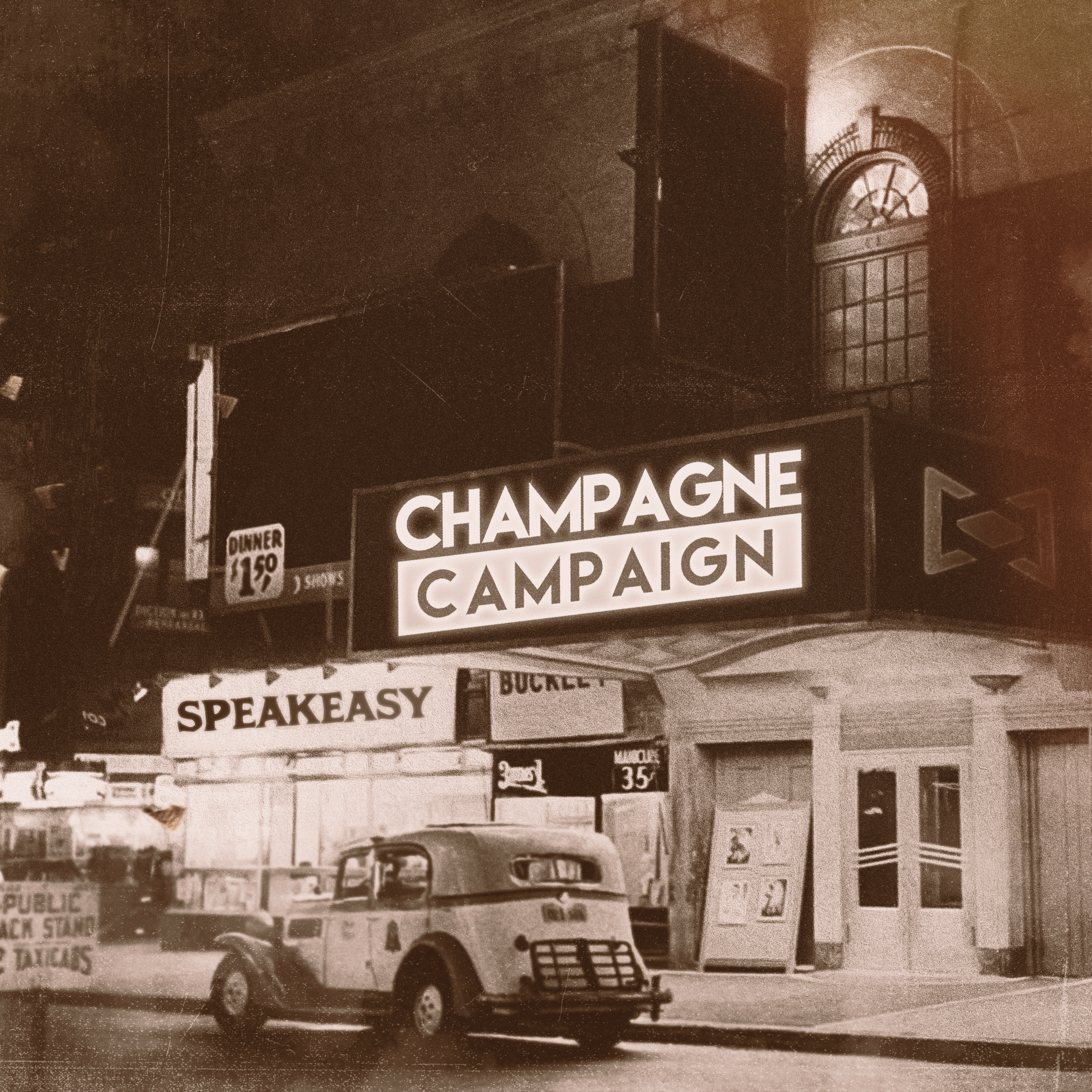 After three years of fine-tuning songs, creating videos and prepping themselves, Champagne Campaign have worked to put themselves in position to release their first LP, “Speakeasy,” Friday night at the VooDoo Lounge in Kansas City.

The album was recorded at Chapman Recording and Mastering with engineer Robert Rebeck before it closed in late 2017.

Champagne Campaign frontman Ryan Lynch said the tracking for the album alone took 120 hours in the studio and that the group worked at it in chunks. The group recorded five songs to produce an EP, but by the time they finished they decided they had enough material to push to a full album. During a second recording session at Chapman, CC threw down three more songs, and three more a few months after that.

“Speakeasy” has the makings of a concept album, in essence telling a story from beginning to end. The tone shifts about midway through the album, from more in-your-face style rock n’ roll tracks and party anthems to slower, more pointed and emotionally-charged songs. Lynch said when the group was about halfway through recording, McClintic had the idea of trying a loose storyline concept. He said the songs weren’t written to adhere to a certain concept, but the framework was there with the material.

“A lot of the songs are just organic experiences that we’ve all walked in life,” Lynch said. “All the songs on this album are based on real life experiences and I think that’s why it has a sort of story-like feeling to it when you put it all together.”

The album kicks off with “The Sound,” the opening guitar licks and gang vocals lending to a sense of energy and urgency that draws listeners in. Lynch’s frenzied vocals also lend it an emotional pull, but drummer Zak Anderson’s beat keeps the pacing and makes the track truly complete.

The second track, “O.N.T.,” cements the theme of the first half of the album – losing control and giving in to primal urges. Anderson’s drums shine in the party anthem, with the subject matter of “One Night Thing” portraying the inner thoughts of a man noticing something attractive across the room. McClintic’s guitar work shines through the breakdown, but the bigger element is the way the entire band truly gels on the song.

“A lot of our songs usually take shape in Justin’s studio and then we kinda just polish them off in rehearsals, but ‘O.N.T.’ really was a song the we all worked on and kind of made its own way,” Lynch said.

The turning point in the story is “Greater Heights.” While most releases tend to lose steam in the middle, Champagne Campaign lifts the curtain, puts their range on display and gets truly personal on the song. It starts with chugging guitars and seems to fit the mold of the first six songs on the album, but during the bridge there is a sonic shift that signals the change in tone.

“’Greater Heights’ is definitely where the album shifts from more of a straight forward rock record to something a little deeper and more melodic than the previous half,” Lynch said. “That’s really just how it ended up. I remember talking about the same thing with Justin, though. We both agreed ‘Greater Heights’ was perfect for that place in the album because it was still a really smash-you-in-your-face rock song, but it also breaks down into a really chill bridge part midway through. Even the first part of the guitar solo is really stripped back and chill.”

The next song carries the theme with “Can’t Stay Sober” piercing like a shot through the heart. Anderson and bassist Drew Keffer hold the track down with Lynch and McClintic driving it home with some dueling guitarwork; audible strumming gives it a truly atmospheric feel while Lynch’s almost desperate vocals create a truly emotional edge as he sings:

“and I’m running out of answers

and I can’t stay sober.

Lynch admitted the song is very personal for him.

“I wrote it at a very low point in life for me,” he said. “It almost felt like an explanation for some of my actions at that point in my life. A lot of people seem to appreciate that song. It’s come to mean a lot more to me over the years too as I distance myself from where I was in life then. It’s almost like a reminder of what life felt like back then for me.”

The album’s pacing finally gives way on “The Prayer,” with the song’s intro stripped down to Lynch’s vocals and some light guitar behind him before the rest joining in at the 1:40 mark. The pace continues the emotional feel of the back half of the album and comes through with an authentic seriousness.

“To me it’s one of my favorite songs lyrically because it applies to me and my own life but on a larger scale I think it speaks to where we are at as a Human Race,” Lynch explained. “To me, it’s a call to rise up and make peace in the world. For example, the line ‘With love on our minds and hate in our eyes, we pray someone will come to save us.’

“What I’m trying to say is most people usually act out because they’ve been hurt,” he continued. “We as people long to love naturally, but through life and experience sometimes that love and passion can be channeled into hate and anger. I think everyone gets that to a certain extent. If we all were more mindful of this, I think we would understand each other a lot better.”

“The Rain” signals another sonic shift with a slow piano intro coupled with Lynch’s vocals. Similar to “The Prayer,” the track evolves into a truly full-sounding surprise with each member shining behind their respective parts. However, it’s Lynch’s delivery and the subject matter that truly shine. Lynch said he had written it when his girlfriend was going through some tough life experiences as a way of “telling her to let everything out rather than bottling it all up.” He planned on the song being for himself and not necessarily a Champagne Campaign song, but after a personal tragedy things changed.

“Then in 2017, I lost my best friend when he committed suicide. This completely rocked my whole world and just put me in an awful place emotionally. For some reason, the chorus of that song I had written was constantly on my mind in that period of time. I ended up rewriting the verses to the song to be geared toward how I was feeling then. I almost wrote it as what I would say to my friend if I had the chance to before all that happened. I hope this song reaches the people that need to hear it. It’s already gotten me through so much.”

Champagne Campaign brings the story full circle with the album-closing track “Final Sunset.” Lynch said it has grown over the years and had a few different versions, and it’s a fan favorite. Understandably so – with themes focusing on regret and moving forward, the song is easily relatable.

“It’s a good cap to the album and a good resolution,” Lynch said. “It’s really just about overcoming yourself. Whatever that may be that’s holding you back from doing what it is you want to do. Shake that stuff off and go accomplish you goals in life.”

With “Speakeasy,” Champagne Campaign cement themselves as a Kansas City band to watch. The album is a full-length ride from start to finish with no filler buried in the middle. Adhering to a loose concept gives the album a sense of storytelling, the band becoming narrators on a journey through spiraling out of control and finding the right path – while reveling in the experience of it all.

“Speakeasy” releases on Friday, March 29 with a celebration show at the VooDoo Lounge at Harrah’s Casino in Kansas City featuring Young Medicine, Maddi, Parvenu, and If It All Ends. For more, follow Champagne Campaign on Facebook here.