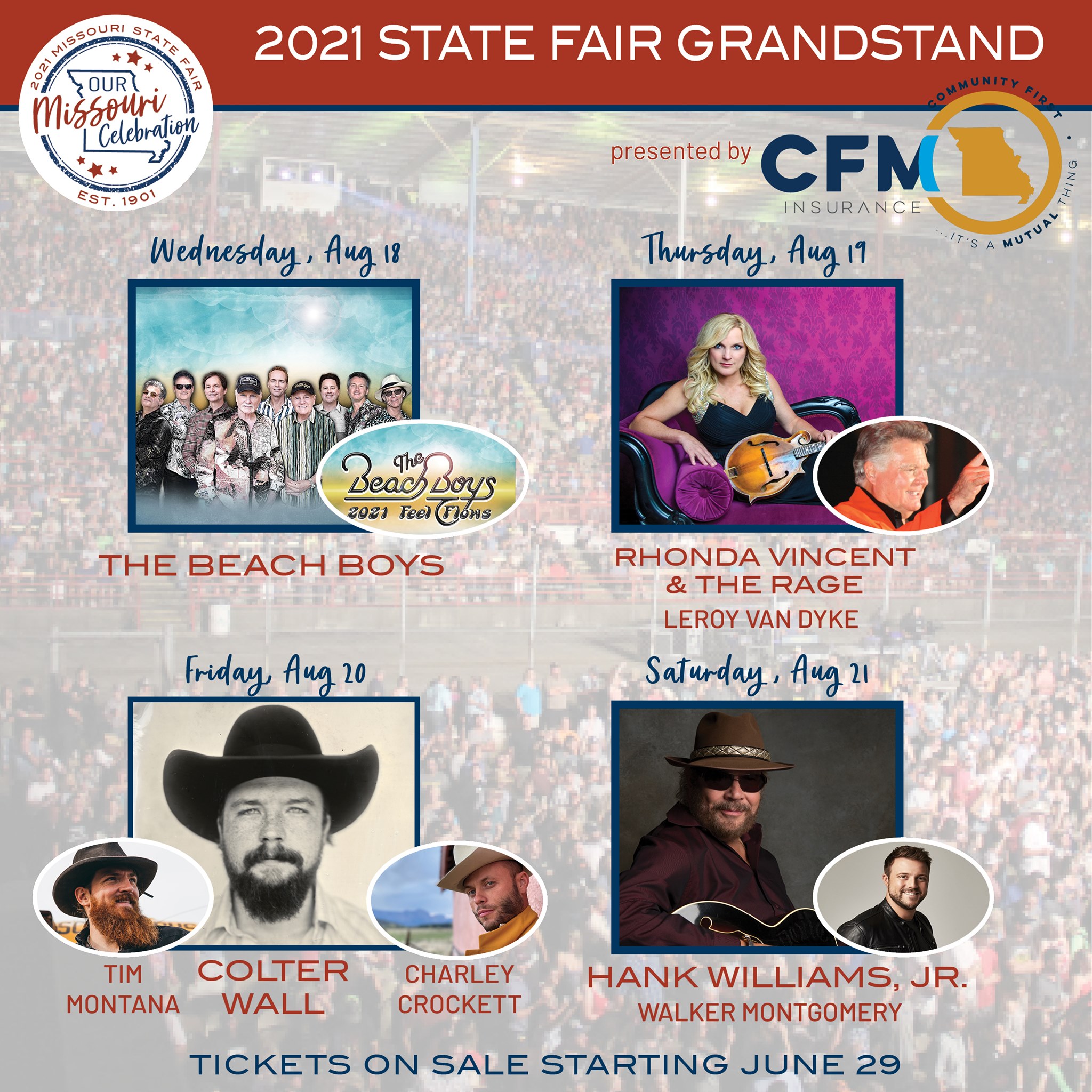 The Missouri State Fair has announced the final four nights of concerts at its Grandstand.

According to a release, The Beach Boys will play on the State Fair Grandstand stage on Wednesday, Aug 18. As The Beach Boys mark more than half a century of making music, the group continues to ride the crest of a wave unequalled in America’s musical history. With more than five decades of touring under their belts, The Beach Boys have performed more concerts than any major rock band in history. Since the band’s co-founder, lead-singer and chief lyricist Mike Love penned the lyrics to The Beach Boys’ first hit, “Surfin,” dozens of the bands chart toppers have become eternal anthems of American youth including hits like “Fun, Fun, Fun,” “I Get Around,” “Help Me Rhonda,” “Good Vibrations,” “Wouldn’t It Be Nice,” “Kokomo,” and more.

The release also state, two Missouri natives will take the Grandstand Stage on Thursday, Aug 19. Grammy award winning Rhonda Vincent and her band The Rage will be joined by opener Leroy Van Dyke. Vincent began her professional music career at the age of five, singing with her family’s band, until she struck out on her own. With the release of her debut album “Back Home Again,” The Wall Street Journal crowned her the New Queen of Bluegrass. Her lifelong dream came true when she was invited to be a member of the Grand Ole Opry last year.

Van Dyke, from rural Pettis County, Mo., is known around the world as an entertainer, recording artist, radio and television star, actor and auctioneer. He has performed for over five decades and recorded over 500 songs, including his popular “Auctioneer” and “Walk On By,” a record that stayed in the charts an incredible 42 weeks.

The release continues on to say three artists will perform on Friday, Aug. 20, Colter Wall with Tim Montana and Charley Crockett. Wall’s recent album, “Western Swing & Waltzes and Other Punchy Songs.” is an ode to the themes and labors of western life. It includes the album’s title track along with his cover of “Cowpoke.” Country-rock singer-songwriter Montana’s song “This Beard Came Here to Party,” was the theme song of the Boston Red Sox as they fought to win a World Series championship and his song “Asphalt Throwdown” is being used by Fox Sports for its NASCAR telecasts. South Texas native Crockett recently released his eighth album, “Welcome to the Hard Times,” described as an immersive experience in sound that carries us back in time.

Finally, the release states Hank Williams, Jr. will wrap up the 2021 State Fair Grandstand line up on Saturday, Aug 21. His extremely impressive resume has spawned 70 million albums sold worldwide, six platinum albums, 20 gold albums, 13 No. 1 albums and 10 No. 1 singles, along with numerous accolades for entertainer of the year, a Grammy and being inducted in to the Nashville Songwriters Hall of Fame and the Country Music Hall of Fame.  His songs include “Texas Women,” “All My Rowdy Friends (Have Settled Down),” “Born to Boogie,”  “A Country Boy Can Survive,” among many others.

Opening the Aug. 21 show is emerging country artist Walker Montgomery. The 21-year-old son of John Michael Montgomery and nephew of Montgomery Gentry’s Eddie Montgomery, his pedigree is matched only by his talent and hard-working drive. Montgomery’s self-penned hit debut “Simple Town,” has over four million Spotify streams and his other singles include the high-energy “Like My Daddy Done It” and passionate “Saving For a Rainy Night.”

More information, including ticket pricing for each of the shows, can be found on the Fair’s website. Tickets will go on sale to the public starting June 29.

The 119th Missouri State Fair, themed “Our Missouri Celebration” is Aug. 12-22 in Sedalia.