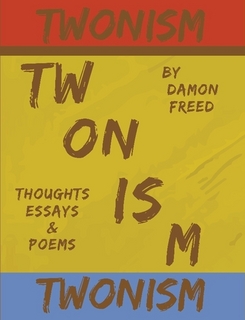 It is the dream of every artist and writer to one day have their works published. For Sedalia, Mo., painter Damon Freed, that dream became a reality with the recent release of his book, “Twonism (Thoughts, Essays, and Poems on Life and Art).”

As the title suggests, the book encompasses Freed’s Twonism (pronounced twONE-izm) style of painting, essays, poems, and philosophies on facets of his life and the art world. Twonism is a style Freed developed while living in New York City, after being inspired by another abstract artist.

“Twonism came to me while standing in my studio in Bushwick, Brooklyn,” Freed said. “And I remember, literally, standing up, I think I had just been to the Barnett Newman show in Washington, D.C., and I viewed the ‘Stations of the Cross,’ which are epic paintings. It’s a series he did in the ‘40s, I believe he began it then. I was reading a book about Barnett Newman on his stripes in his paintings, and he referred to them as ‘zips.’ Something clicked. In that moment, Twonism came to mind. So, right around in there it was blossoming. I needed something I could latch onto as a title for the book. It seemed appropriate, it was ambiguous.”

While abstract, Freed said all of his paintings are grounded in the real world – inspired by a wide range of objects and experiences ranging from a cities grid work to emotions. He finds inspiration in his experiences and puts them to canvas through a variety of paint types such as oil and acrylic.

“Emotions, these are all real things,” Freed said. “Maybe we consider them far-fetched but emotion is a very real part of life.”

While abstract art can mean something new to every individual who views the piece, Freed noted there is some intention behind the pieces.

“So the art, the paintings are also ambiguous,” he explained. “I think the artistic style is my own, but it is a labor of love of course. It’s abstract, I like to say non-objective abstract. I think in those terms sometimes because that means creating a painting without forms, objects from the world is what I mean by that. So no objects, no recognizable objects … It’s not narrative, I’m not interested in telling a story.”

As the book transitions to the essay section, Freed inserted some of the abstract Twonism paintings on the page, a decision he said was intentional to illustrate each part. Freed said the essays are accumulated from what he describes as “studio notes” he’s been keeping on his computer for more than 15 years.

The subject matter ranges from paintings and the different facets of putting pieces together, emotions, thoughts on random topics, and advice for young artists – which Freed said hits home, in part of his role as a teacher at the University of Central Missouri and State Fair Community College.

“That’s an important part of the book, teaching,” Freed said. “That’s my career, part of it.”

A large part of the book symbolizes motivation. The stages of creation for an artist range from “attack,” as Freed put it, to approaching the medium in a more subtle method. Freed said his work now shows more maturity, based on how he’s grown as an artist.

Freed’s brother gave him the advice to put his poetry at the end of the book, giving it a good bookend and something “soft” to end the book. As with his paintings, Freed uses his daily experiences as motivation for both his essays and his poetry, giving them a grounding in real life. While it may seem some of his poems have a sense of duality between the topic matter and other aspects of life, Freed disagreed with that point of view.

“Duality refers to a potential opposite situation, and I don’t believe there’s a break,” he said. “I believe in opposites, that they don’t exist. I believe that there’s a connection, always … Balance is a crucial element in what we do.”

“Twonism” is a labor of love project for Freed, based on an idea he had to publish a book in 2005.

“It was always my hope to do so, and that just came about,” he said. “I began writing in 2005 seriously, to a degree. And I thought ‘why not, one day’ but it was so in the distant future I couldn’t perceive ever having done it. But now here it is, and it’s taken a couple years to put it all together.”

Freed’s favorite poem is called “A Song of Greyness,” which is the final poem of the book. It again offers a sense of ambiguity in the words, and carries a weight Freed said he holds close to his heart.

“It’s hopeful, it’s optimistic … I think that’s the core of what I do. It’s optimism. I air on that side of things.

“Art is about light, and it’s about … we work with color as a painter and it’s beautiful. It’s about beauty and letting people know, in our own way, about the positives.”