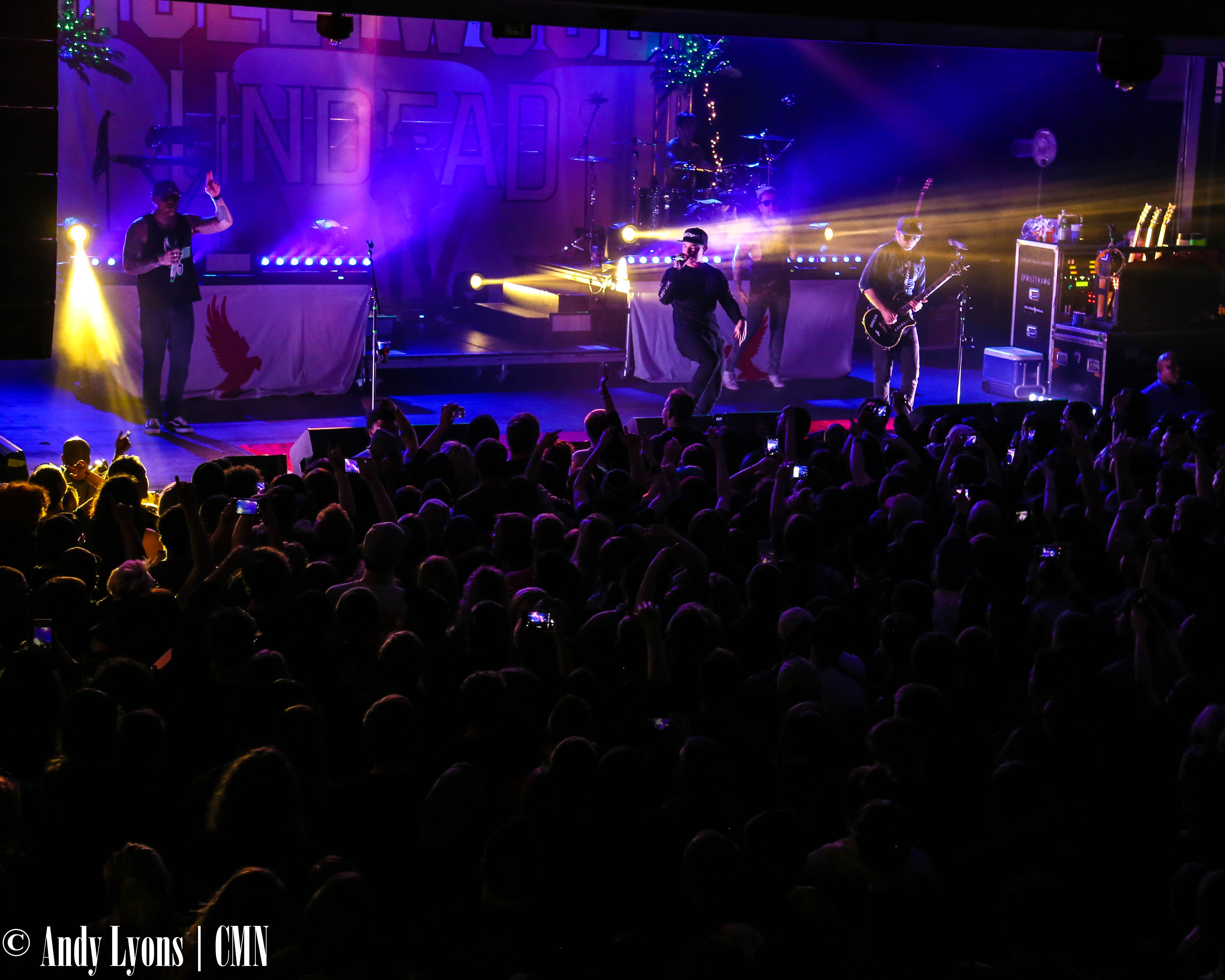 Last Saturday, we took a road trip to The Truman in Kansas City, Mo. for the Undead Tour featuring Demrick, Butcher Babies, and Hollywood Undead. The show was a very eclectic mashing of genres and the bands came prepared to bring the house down and welcome the super moon!

First to make their way to the stage was Demrick, formally known as Young De, an L.A. based hip hop artist with his hype man and laptop. Having no idea about Demrick or his music and being an old school gangsta rap fan, (i.e. NWA, Ghetto Boys), I try and keep an open mind for different genres and new acts. Although the crowd was clearly heavy in the Undead fan base, they were very receptive to the hip-hop flow of Demrick right from the press of the space bar.

Demrick and his hype man had no problem getting the crowd bouncing and waving their hands in the air, like they just don’t … well you get the idea. Demrick was in control of the crowd when they exploded with cheers as he seem to light a blunt on stage. He then proceeded to explain how he dreamed of toking out on the stage of all 49 venues he was visiting on this tour and thanked security for being busy during those times – it was a highlight, I thought, and cheered myself. Demrick had good flow, good energy and a good stage presence. Some of the greats he has worked with like Xzibit, Snoop Dogg and Too Short clearly left him with some swagger.

Again, it was easy to tell the sold out crowd was heavy Undead fans, so the diehard Butcher Babies fans were the only ones who knew the face melting that was to ensue. As drummer Chase Brickenden, bassist Jason Klein, guitarist Henry Flury, and vocalists Carla Harvey and Heidi Shephard hit the stage the screams from the die-hards and sold out crowd were strong with excitement. The Butcher Babies wasted no time breaking in the crowd with the title track from their newly released, third full-length album, “Lilith.” It’s a spin on the tale of Lady Bathory as told in a very well done and entertaining video.

The album debuted at number one on the Itunes metal charts, and number 15 on Billboard’s Hard Rock Album charts when it released in October. Before the set, Harvey said “you’ll see tonight the set list is very new song heavy.” Shepherd explained the difficulty in choosing tracks for the tour.

“We wanna play the new songs,” she said. “It’s like choosing between your babies.”

Butcher Babies wasted no time going into face-melting thrash song “Burn the Straw Man,” which highlights their mixture of the classic BB sound and new direction, and also shows off new drummer Brickenden’s style addition to the band. Butcher Babies are none stop rage and energy on stage as they played classics like “Monsters Ball,” “The Butcher,” and a medley of previous tracks.

“Huntsman we wrote a year and a half ago, so I’ve been singing that song in my head for a year and a half,” Shepherd said of finally playing the new tracks live. The energy stays through the roof as they blaze through other new tracks including “Korova,” “#Iwokeuplikethis,” and “Pomona.” Late in their set, the group played the sultry, sexy track off Lilith Called “Headspin.”

“It’s a really fun song,” Harvey said of the track. “Sometimes it’s easier to sing about pain than be sexy.”

Butcher Babies closed their set with another new track, “Underground and Overrated.” The song feels like a mashup of swing and metal. Flury adds blazing riffs and Klein’s barking bass easily help get the energy higher on every track with Harvey and Shepherd going full throttle with non-stop head banging and stage jumping. “Some have never seen a pit” Shepherd said of the younger crowd and I think that drove her to keep with her tradition of jumping into the crowd to be the middle of her signature circle pit. The Butcher Babies never disappoint with their in your face, full throttle, nonstop, explosive, energy filled show.

You could feel the excitement in the air as it was time for headliner Hollywood Undead to take the stage. In support of their new album “V,” the group hit the stage for a full house of screaming cheering fans. Charlie Scene and company wasted no time in full face masks jumping right into their set and bringing the house down. Keeping members of the band straight is harder than you would think as they all seem to exchange rolls throughout the night. With great crowd interaction and exciting stage show, the Undead had no problems keeping the fans intrigued and dancing. The highlight for me was easily when they brought a very young brother and sister on stage. The two had been jamming the rail all night, to sing along and rock with the band. The kids knew all the words and had no problem stealing the spotlight with their heavy metal cuteness and their horn throwing prowess.

If you are looking for a great blend of heavy metal and hip hop Hollywood Undead is for you. In fact Undead did a great job of bringing three genres together for a great night of music to be had by all. Listen to our interview with Heidi Shepherd and Carla Harvey of Butcher Babies below: