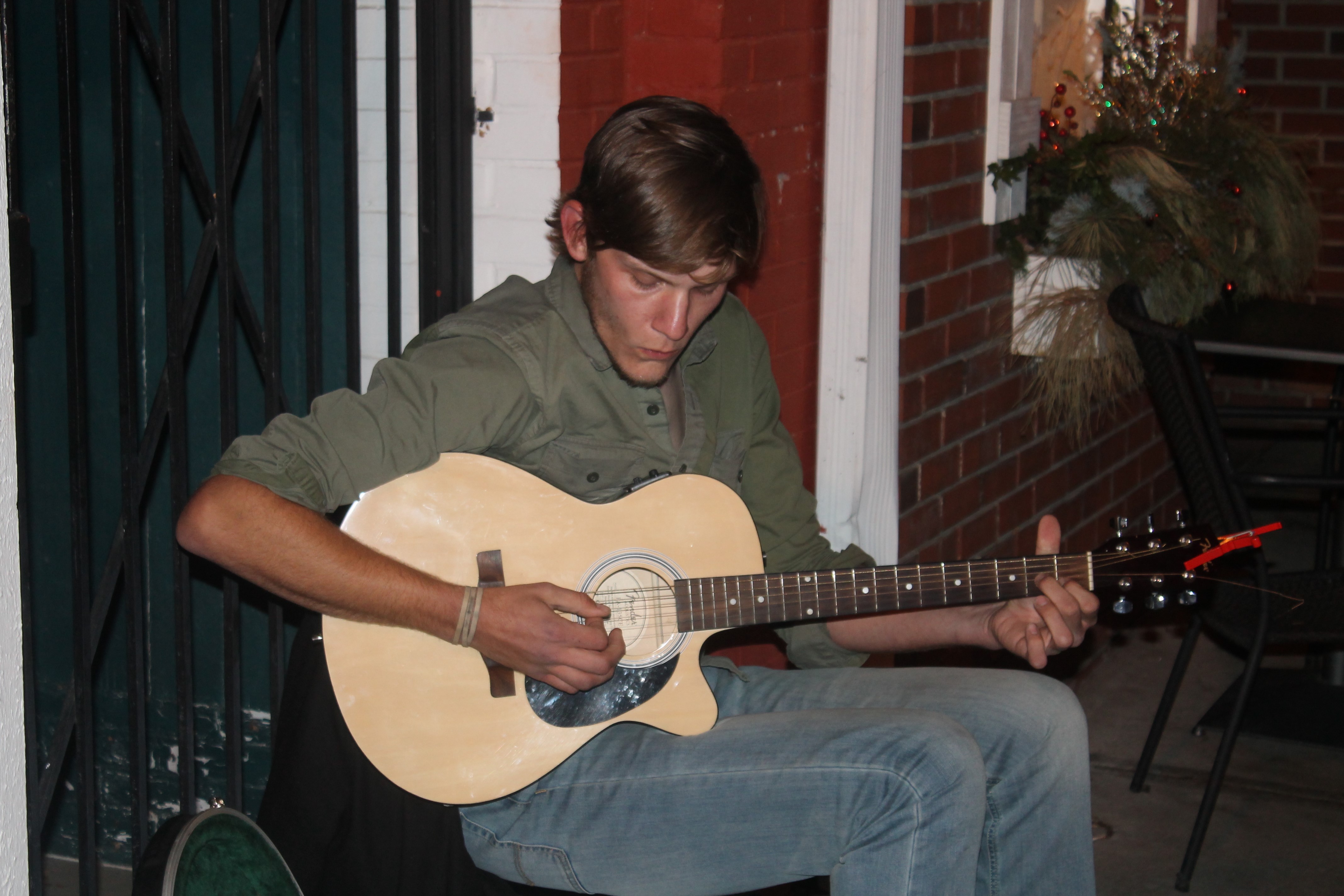 Spring and summer have come and gone, and against the odds, Warrensburg’s First Fridays Art Walk is still going.

December’s Art Walk actually fell on the first of the month. I didn’t notice as many people roaming about outside during the function. I was walking up Holden Street, and I saw Michael Lamont perched on the sidewalk between Java Junction and The Market playing acoustic, melodious folk music. A few had gathered to listen. The occasional passer by dropped a dollar into his guitar case. Surveying the collected cash in the case, it looked like enough to buy a decent sized pizza.

The dollars dropped into Lamont’s guitar case was evidence that a segment of the population in Warrensburg values the arts enough to put money behind it.

But I couldn’t help but notice that I didn’t see as many people packed onto the sidewalks as whenever I first attended the Art Walk in May.

But the beat still goes on. Inside The Gallery Artist Cooperative, located at 111 N. Holden, across the street, the building was rife with activity: friends engaging in conversation, patrons perusing the displayed art, deals were being made and money was exchanging hands. Within the walls of The Gallery, it wasn’t only a matter of art meets commerce but also community connection. The event has become an environment where musicians, artists, writers and others are able to find common ground.

Julia Kneece, a local artist and regular attendee at First Fridays, said her interest in the event came from having a number of paintings available at The Gallery, and coming down to First Fridays motivates her to sell more of her art. She spoke of a sense of community building at First Fridays.

“It allows people to integrate and meet new people that they’ve never talked to before, and it allows people, especially the artists to share their knowledge of art to the community, because people do have questions about it,” Kneece said.

“You’ll probably see most of these names in the history books in 20 or 50 years from now, and we get to see the genesis right now,” Chase commented.

Behind the existence of the First Fridays Art Walk is Jay Linhardt, and he is determined to keep the operation alive.

Linhardt said the crowd at Firday’s event was larger when things got going around 6:00 p.m. He said some people were stopping by due to the Christmas parade that took place in downtown Warrenburg on the same night.

Even though a sizable crowd was present throughout the night, the amount of musical acts was reduced in size from that of previous months. Many of the performers who regularly play at First Friday are local acoustic musicians, names like Marilyn Brie Herrick and Manda Shea & the Sumpthin Bros. However, a few out of town acts, such as Mad Libby and A.J. Gaither have been a part of Warrensburg’s First Fridays Art Walk.

Linhardt sites the demise of The Bay as a reason why he’s not able to book as many bands.

“There’s no venue left for people to plug their amp in and play,” Linhardt said. “We let our live music venue go away, and now tonight, I had bands asking to play on the art walk, and they can’t play because there’s no venue for them to play at.”

Although Linhardt admits it’s disheartening the live, plugged-in band component is now missing from the monthly celebration, he also believes a place and space for live bands will flourish again. He said it’ll just take time.