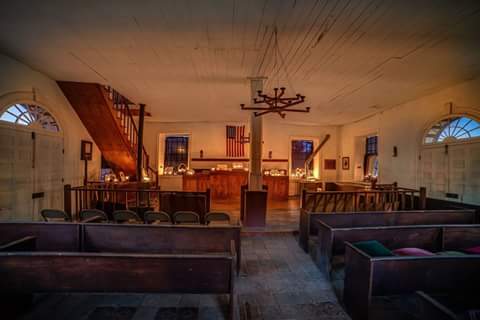 Concerts in the Courthouse continues tonight in Warrensburg

Eddie Osborne is a man with a deep rooted love of music. With the upcoming Concerts in the Courthouse series that he’s put together, he is sharing his love of music with the Warrensburg community. Osborne said the concerts are his gift to the community.

Osborne is a long time music fan. For years he hosted the “Eclectic Cafe” radio program. His love of a diverse cornucopia of sound goes all the way back to the 1960s.

“Growing up with top 40 radio in the ’60s, which was at that time you would hear The Beatles, Buck Owens, James Brown and mindless pop all on the same station,” Osborne said.

Concerts in the Courthouse will take place in Warrensburg’s first courthouse, which was the location of The Old Drum trial.

The musical content within this series of concerts runs a varied gamut, from folk to choir. And this year marks Concerts in the Courthouse’s ninth year.

Osborne said he doesn’t look for a particular sound. He said he chooses who plays based on performers he knows and enjoys. He said some musicians have contacted him. Because of the intimacy of the venue, he is more concerned about the entertainment aspect over all other elements, though Osborne also said many of the musicians being hosted are technically adept.

“It’s a banjo and fiddle duo,” Osborne said. “While they are steeped in traditional music of the Ozarks, they also perform blues and has some jazz sensibilities.”

“After that is the Lakesiders, who are very talented, very engaging,” Osborne said.

Osborne mentioned some of the artists taking part in the Concerts in the Courthouse play an old-time style while managing to appeal to a younger audience. He views older styles like folk becoming popular among a younger audience as a matter of ebb and flow.

“Styles come back in style shall we say,” Osborne said.

Osborne said his love of music has continued throughout the years due to a love of live entertainment.

The arts and entertainment scene in Warrensburg has encountered a series of recent changes, its own ebb and flow. Over the summer, The Bay – the live music venue, closed its doors, while The Gallery Artist Cooperative opened, and the First Fridays Art Walk continues to draw crowds. A greater niche’ for music and the arts is coming to fruition in Warrensburg, and something like Concerts in the Courthouse fits with that.

Concerts in the Courthouse continues tonight with the Lakesiders at 7:00 p.m at 302 North Main St. A Facebook event for the show can be found here.