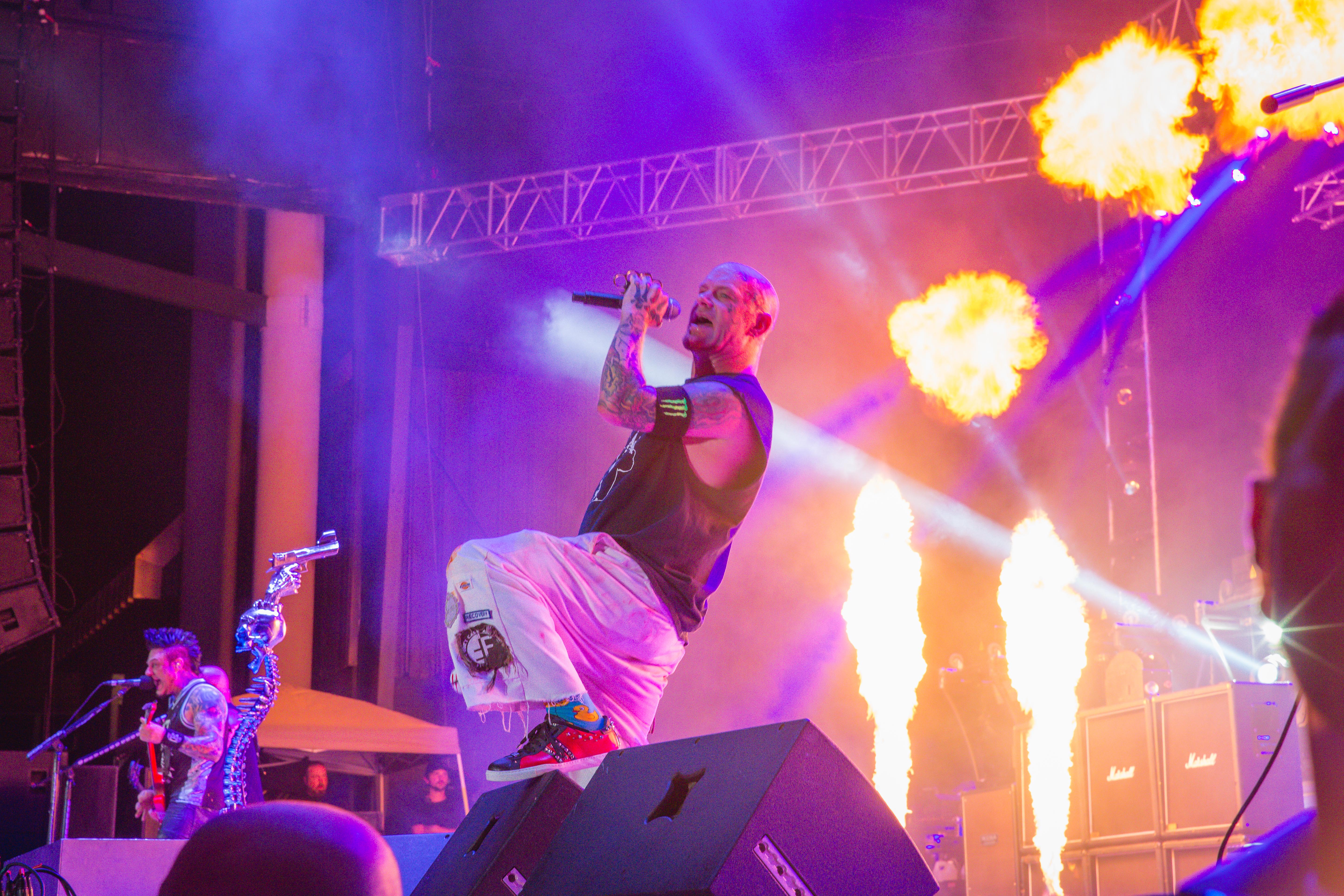 Rock fans in Camdenton, Mo. celebrated the full moon in style by hosting Five Finger Death Punch and In This Moment with special guest Fire From The Gods at the Ozarks Amphitheater last week. The Amp opened in 1993 but has only been back in operation for the last four years, the Amp has been a big draw for a small town, and this was one of its biggest shows to date. The Wednesday night show was its first metal show and was nearly sold out, it was one for the record books, and I doubt its last.

The night started early for some, as line campers found their spot to wait long before doors – despite it being a mostly seated arena. The evidence that it was a highly anticipated show was even clearer as the line was formed as far as you could see long before gates opened. From day one fans of In This Moment to kids going to their first FFDP show, the lineup brought all ages and all lovers of a good show together for what was to be an epic night. New to the Amp, I was not sure what to expect but was pleasantly surprised at the organization and layout of the venue.

The burden and pleasure of being the only support and opener for two of the biggest bands in the business today could weigh heavy on the shoulders of some, but for show starters Fire From The Gods, it was carried with ease. Out of Austin, Texas, Fire From The Gods are a very personal band that reformed in 2015 and boast a heavy message derived mostly from the life of lead singer AJ Channer and delivered in a genre mixing metal style with hip hop and reggae influences. Joining Channer and matching his high energy was Jameson Teat and Drew Walker on guitars, Bonner Baker on bass, and Richard Wicander behind the drums. Fire From The Gods bring real life issues and hot button topics to the forefront with powerful lyrics that address everything from racism to abuse of power. While having nowhere near the stage set up of the big acts Fire From The Gods bring enough talent and head banging jams to easily make up for it. With a fire burning hotter than ever from the new lineup, Fire From the Gods is sure to be a large venue headlining act in no time.

As the full moon started to rise bright in the sky and darkness fell over the venue, the setting was perfect for the one of the biggest and most theatrical bands in the art of entertainmetal, In This Moment. In the fashion of greats like Iron Maiden and Kiss, In This Moment and lead singer Maria Brink  – with brother from the start guitar player Chris Howorth , bassist Travis Johnson, Kent Dimmel on drums, and the “War Machine” himself Randy Weitzel, have harnessed and reinvented what a “show” means. In This Moment have given new meaning to what it should take to entertain a crowd. They put on an all senses inspiring spectacle of imagination and heart.

They are joined in a story telling reality bending phenomenon of a show by three back-up dancers, “blood goddesses,” who help bring extra life to the music and world that ITM create for their fans. Despite garnering some earlier negativity for their unorthodox approach and out of the box performance, ITM stayed true and have mastered their art. With the latest materialization of their vision and colossal Tim Burton inspired set, they have ignited a new fan base hungry for more in their live show and at the same time quenched the thirst of diehard fans.

They started the show on their massive set with Brink, posed high above the crowd in a full body covering white robe and surrounded by her three goddesses in black robes with “blood masks” and drums. The generals of the Blood Legion stood statuesque in their positions and the lights went dark as the entire venue erupted with cheers as ITM started with their beautiful rendition of the Steve Miller Band classic and new track “Fly Like An Eagle.”

The goddesses joined in on Diimmel’s thunderous drums and started to shake fans to their core. Going into their next track “River of Fire,” the goddesses unveil Brink’s white robe to reveal her blood red robe, the generals removed their masks and the night takes flight and all 6,500 fans are in the palm of Brink’s hand from the start as they break out into even louder roars of approval and without cue, light up the arena to appear almost as the millions of stars in the full moon night sky.

In This Moment bring a new and different life to each song with almost seamless costume changes and deeply thought out choreography. No better example than their horn throwing, full moon appropriate, slam jam “Big Bad Wolf” as all the ladies dawn wolf masks and prowl the stage in an almost tribute to the two sides of the coin we all have. Continuing with the fan favorite sing along staple “Blood,” it was clear their set time was much shorter than fans would have liked. Closing out the show with another track from “Ritual,” “Oh Lord,’ and then their woman empowerment anthem “Whore.”

For the track, Brink took her place even higher up a podium dawning the acronym W.H.O.R.E. while wearing her whore style dunce hate with ruler in hand, she demands the attention of the crowd. With the blood goddesses at her feet in ceremonial shackles and held in place by gallows, each wearing signs painted with the word “shame,” Brink addressed the crowd and erupts into their final song to deafening cheers. With the short set list omitting the general’s monster jam, time was short but none the less the men of In This Moment took every chance to melt faces and make connections with the crowd as Brink led the show of perfection with perfection.

There isn’t a much bigger contrast to In This Moment and their theatrics than the aggressive, in your face, straight forward metal styling of headliner Five Finger Death Punch. It was evident early in the day they had a large fan base in attendance as the trademark slap could be spotted painted on many a fans face. FFDP’s only original members are vocalist Ivan Moody and guitar player Zoltan Bathory and then solidified with members Jason Hook on lead guitar and Chris Kael on bass. The band’s newest member, and recent Jeremy Spencer replacement, drummer Charlie Engen had big shoes to fill but had no problem making his own footsteps in an iconic band that has proved to be one of the most successful acts of the last decade.

Boasting several certified gold albums and big arena sell outs all over the world, FFDP are seasoned pros. The group deployed a rather simple set with a great light show brought life to their forceful and energetic set that included hits “Lift me Up,”” Sham Pain,” “Wrong Side of Heaven,” and “Coming Down.”

Very interactive with the crowd, FFDP are always generous with smiles and guitar picks. Never leaving a dull moment and one of my favorite highlights of the night was the trademark move of bringing every child in sight on stage to join in on the hit track “Remember Everything.” Moody makes sure every kid leaves with an item of rock swag off his own wrist or neck.

Another highlight and new to me act was when Jason Hook took to a square box just off stage right in the middle of the set and rode it straight up into the air. He was lifted all of twenty feet straight up to tower over the crowd and blaze a solo. Moody made sure to give props to Kael and his sobriety as he would read signs in the crowd and interact with fans. He recognized a cancer survivor and rewarded them with his $6,000 cobra mic stand was merely one example in which Moody showed his love for the fans. They closed out the night with tribute and gratitude to the moon and blazing head banging face melters “Top Of The World,” “Under and Over It,” and the emotional track “The Bleeding.” Five Finger Death Punch give every ounce of energy and heart in their performance of blistering horn throwing jams and passion filled rock.

A perfect night was had by all 6,500 in attendance and with the success of the show, organization of the venue, and killer staff I’m sure it won’t be the last metal show Ozarks Amp play host too.