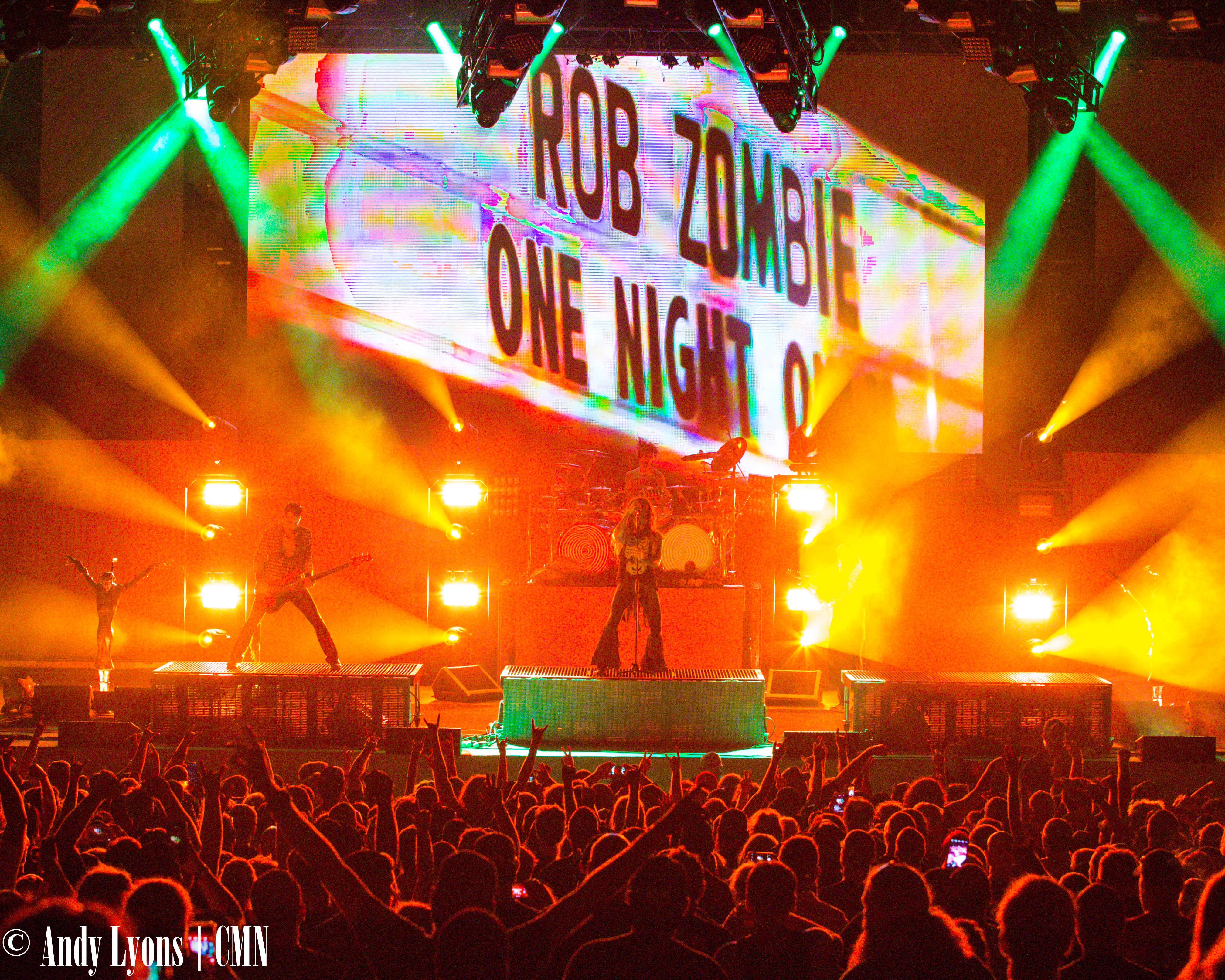 When Rob Zombie and Marilyn Manson announced a third co-headlining tour of the “Twins of Evil,” fans across North America rejoiced. The six-week tour is covering 24 dates across the continent with six shows in Canada – including a stop at Providence Medical Center Amphitheater in Bonner Springs, Kan., Wednesday night.

Fans packed the venue affectionately known as Sandstone for two living legends despite temperatures nearing 100 degrees. Officials allowed fans to bring in bottles of water up to a liter in size – without their lids of course – and security guards consistently gave water to fans along the rail throughout the show.

From atop a huge dais, Manson greeted the crowd with his arms as wide as his smile. Taking the stage at sunset, he was extremely amped up and the crowd up front echoed his energy. Early in his set, he hopped down into the security barrier and leaned over the rail into the crowd. As he made his way back to the stage he was helped by security guards and seemed as if he was very stiff – it’s obvious his injuries from a stage prop falling on him nearly two years are still bothering him, but it was very cool of Manson to get up close and personal with his fans.

Midway through Manson’s set, the band played the opening guitar riff of “If I Was Your Vampire” and the crowd erupted. They played a minute or two of the track before going into “Say10,” during which Manson brought out his custom butcher knife-shaped microphone.

Manson closed his set with “The Beautiful People,” played the chugging riff on a guitar with a drumstick before going into the song. It wasn’t long before he hopped back into the security barrier and got on the rail, drawing scores of high fives and plenty of women flashing him for his attention. As the song was coming to an end the group dropped the music as the crowd chanted “The Beautiful People… The Beautiful People.”

As they finished, Manson took his time moving down the barrier and high fiving fans. He stopped and made it a point to high five a little boy who was maybe 8 years old. He asked him a question and held the microphone up to the boy, who said “yeah,” then yelled “I love you Marilyn!” drawing a huge applause from the crowd.

The lights dimmed and the crowd roared for Zombie as “Kansas City” by Wilbert Harrison played over the PA. The lights kicked up as he hit the stage with guitarist John 5, bassist Piggy D, and drummer Ginger Fish, wasting no time going into opening track “Dead City Radio and the New Gods of Supertown.”

Late in the set, a cool breeze brought the temperature down to around 80 degrees as John 5 took the stage to play a solo that included Led Zepplin’s “Heartbreaker.” The screens around the stage displayed flames and the number 5. As John 5 paced back and forth across the risers at stage front, Zombie took off into the crowd with a security detail and photographer Rob Fenn in tow and would stop throughout highlighting members of the crowd with a flashlight.

The solo melted into “Thunder Kiss ’65,” and Zombie’s visuals kept fans guessing. A giant devil prop joined the group on stage as the crowd clapped in unison to the beat of the song. There were more surprises as well – the group finished and played a snippet of Alice Cooper’s “School’s Out” and then played a cover of “Helter Skelter” by The Beatles.

Palaye Royale kicked off the show with the sun beating down with a cover of “I Wanna Be Your Dog” by Iggy Pop before launching into a high energy set that got the mood right in the pit. Despite sweating bullets, the group put on a great set that perfectly set up the Twins of Evil.

Manson and Zombie played setlists that could be greatest hits albums. Manson seemed to really enjoy performing in front of the KC crowd and he consistently chatted to them. Taking the time to pull cheers from each direction individually and tossing high fives along the rail showed a big change in attitude from the famously grumpy rocker.

Zombie always brings a high energy set full of visuals, both screens and props. His shows turn into singalongs with the crowd and Wednesday night was no different. While his setlist becomes predictable, Zombie and his band work the crowd into a frenzy and always make for a great show.

View our extended gallery from the show via SmugMug here.