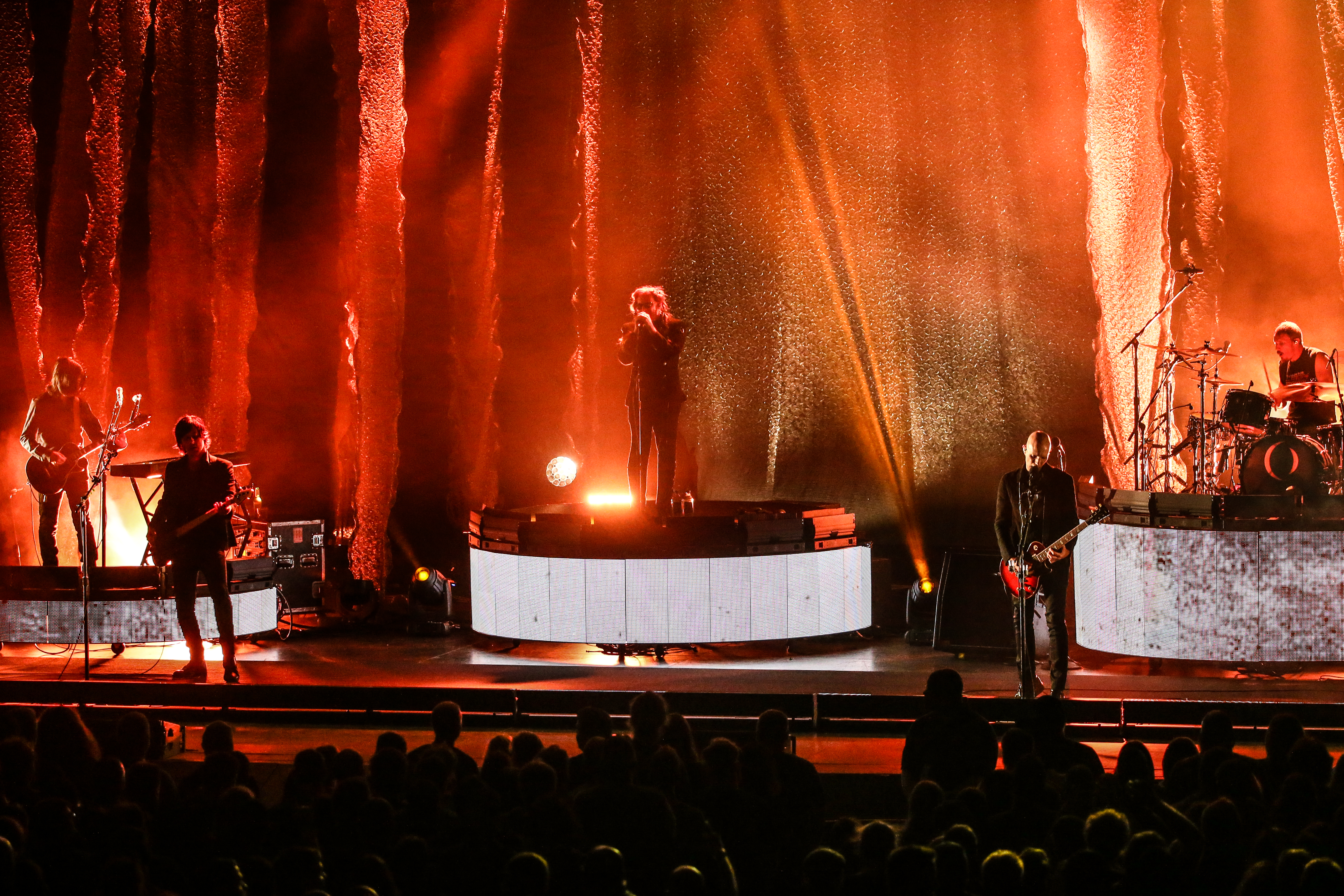 When the lights dimmed at Starlight Theatre Wednesday night, the crowd went ballistic. A Perfect Circle was in Kansas City as part of their first tour in seven years. The band opened with “The Package,” playing through a thin veil over the front of the stage with backlight casting massive silhouettes of the bandmembers. The crowd of nearly 8,000 lost their minds as the song hit its crescendo and the sheet fell, revealing all five members on stage.

The super-group features legendary Maynard James Keenan of Tool and Puscifer as well as co-founder Billy Howerdel on guitar, James Iha of Smashing Pumpkins on rhythm guitar, Matt McJunkins of Eagles of Death Metal on bass, and Jeff Friedl on drums.
During a brief break between songs, Keenan called it the “Remind You Motherfuckers We’re Still Here Tour.” And remind the crowd at Starlight they did, playing songs across their three albums set to a light show that completely complimented the prog-rock elements of the group’s sound.

Known to be reclusive, Keenan was relatively attentive throughout the show, chatting to the crowd and making jokes – including pulling out two shake weights he “got for his birthday” and provocatively shaking them in front of his face in the middle of the set.

A couple of highlights from the set included songs from 2004’s “eMOTIVE.” Keenan mentioned how the album had some mixed reactions to the political nature of it and said it is artists’ job to interpret and report what’s going on and be “merchants of emotions” before playing a haunting rendition of John Lennon’s “Imagine.”

The crowd finally came alive during the pounding intro of “Counting Bodies Like Sheep to the Rhythm of the War Drums.” The crowd got into an extended intro to the song which saw Keenan goose-stepping in circles as Friedl blasted the drums.

There was also some new content featured, which included “By and Down” that was debuted in 2013 and brand new tracks “Hourglass,” which included some cool vocal effects, and “Feathers,” an airy ethereal track the band used to close the show.

The production quality was amazing for the band’s set. While it is a bit out of the norm to be heavily backlit, Keenan is known for obscure antics such as singing from behind a sheet or with his back to the audience. APC is known for its ethereal sound with plenty of ups and downs and the lighting really complimented both the airy, lighter tracks as well as the heavy-hitting, grinding tracks that fill the repertoire.

The group has been enforcing a no photo rule at their shows, and Starlight’s security took it seriously, running and covering cell phones as people tried to grab shots. A recent fan video of “Feathers” was taken off of YouTube in what is hopefully a plan to stop leaks ahead of a long-awaited album from the group.

The no cell phone rule was a double-edged sword though – since people weren’t allowed to keep their friends updated on the show every 10 seconds, it became a more immersive set. People were actually paying attention to the show and not blocking the view of the 10 people behind them with their phones above their heads the entire show, which was really nice. Knowing Keenan, the plan probably had both in mind.

Enough can’t be said about the group. They come from an era of music that actually meant something – lyrics and music that meshed together to deliver a message. With APC the message ranges from emotional to political, but many bands just don’t produce high-quality content that Keenan & Co. have been doing for the better part of 20 years or more. Seeing it live was definitely special for fans, and no one left Starlight disappointed.

The setlist was:The Package; The Hollow; The Noose; Weak and Powerless; Rose; Imagine; Thinking of You; By and Down; Thomas; People Are People; Magdalena; Vanishing; Hourglass; Counting Bodies Like Sheep to the Rhythm of the War Drums; Stranger; Blue; The Outsider; Gravity; Feathers.

A Perfect Circle continues their tour through the first week of May, ending May 7 at the Hollywood Bowl. Follow them on Facebook here.

For an extended gallery of photos from Andrew Mather, click here.