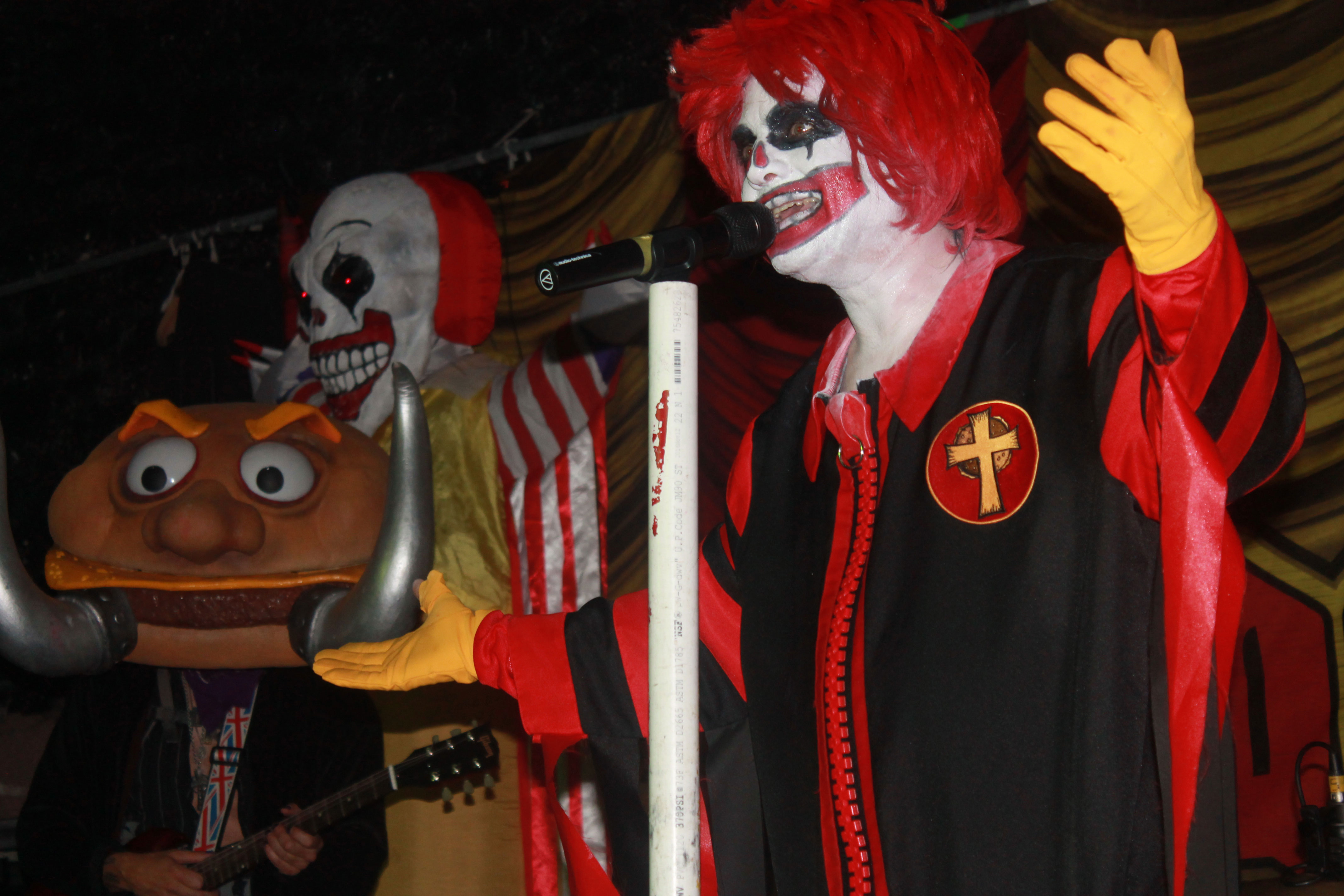 “That was weird,” a refrain repeated by Ronald Osboure, lead singer of Mac Sabbath during their set, might have perfectly captured the theme of the night of May 15 when the premiere purveryors of “Drive Thru Metal” came to Flagstaff, Arizona at The Green Room.

To enter the world of Mac Sabbath I traveled more than 1,000 miles.

Months prior, they were doing a coast to coast tour, with stops in Kansas City, Mo. and St. Louis, and I missed both of them.

I really wanted to see this band, and I was willing to travel to do so. As a teen, I heard Ian MacKaye sing about no movement in the waiting room, and years later I fully understand the gravity of those lyrics.

After arriving and spending part of the afternoon exploring a city I had never been to, night fall was descending, and it was time to go the show.

While sitting at the bar at The Green Room, seeping in from the next room, I heard the sound of Frank Sinatra’s “Send in the Clowns” through the PA, and I saw more patrons file into the performance area – I thought it was time to do the same.

On top of “Send in the Clowns” came pre-recorded laughter, which sounded unbelievably sinister and foreboding. The laughter was broken by the even more ominous sound of alarms going off.

The curtain went up, and the audience was left to gaze upon the glory of Mac Sabbath, an outfit that’s equally hilarious and hellish, like a living, breathing cartoon ripped from Dante’s “Inferno.” The stage was dimly lit, adding to a macabre and surreal ambiance, like a sacrificial altar stuffed inside the McDonald’s PlayPlace of our youth.

They stood, ready to rock, Slayer MacCheeze on guitar, Grimalice on bass, Catburglar on drums, all searing through Black Sabbath’s “War Pigs,” but changed to “More Ribs,” an ode to the McRib sandwich.

Seeing Mac Sabbath was more than seeing another rock or metal band. It’s an experience unto itself. The stage props, like a gigantic clown head that would light up and blow out clouds of smoke, were just as much a part of this experience as the music.

Although the whole band functioned like a well-oiled machine, with their act so tight and cohesive, lead singer Ronald Osbourne was the focal point, like a lightning rod on stage, transmitting controlled chaos.

During the first song of the night, he took to the stage in a strait jacket, and then things got wild!

Obviously Ronald Osborne was doing an homage/send-up of Ozzy Osbourne, running back and forth across the stage, wildly whipping his head about, clapping, sticking out his tongue, manically laughing.

Also with his stage presence, I picked up a little bit of “The Decline of Western Civilization” era Keith Morris, as well as Manos from “Manos: The Hands of Fate.”

The banter in between songs was ongoing and entertaining. Ronald Osbourne came off as equal parts cult leader and comedian. The audience was laughing and howling in response to his antics.

The reciprocal synergy between the audience and the band was phenomenal and undeniable. The crowd was feeding off the amplified energy Mac Sabbath was throwing out, and throughout the night projectiles of all sorts flew into the audience, from confetti to giant inflatable burgers.

The Clown Prince of Darkness even brought a little bit of optical illusion to the stage. Beer was poured into a bucket. Ronald then moved all over the edge of the stage, taunting the audience with the bucket, reeling back and taking aim, setting up to hurl it, yet when the contents of the bucket were thrown from the stage, the splatter was bits of paper instead of beer.

It wasn’t all theatrical tricks with Mac Sabbath. Their musical chops were razor sharp. Such proficiency shined heavily on “Zipping up the Uniform,” a take on “Symptoms of the Universe.” The overall fortitude of this one was strong enough to cut glass.

Through the amplified ruckus, Ronald Osborne made the audience aware that Mac Sabbath reign and rule in the realm of Drive Thru Metal. Early on in their set, he thanked the audience for not going to see Cinna-Bon Jovi or Pantera-Bread.

He also noted the snack obsession was seeping into other scenes, including, hip-hop, referencing the likes of Dairy Queen Latifah and the Apple-Beastie Boys. “You like them, don’t you?” Then the unexpected happened – the band did a cover of Beastie Boys’ “Sabotage” changed to MacSabotage. Their stage manager/merch guy “Employee of the Month” even got in on the action contributing vocals.

As their set was winding down, the audience continued to rev up, matching the band’s pace, which showed no signs of faltering.

There was more onstage banter. This time concerning how punk bands were catching on to snack rock, D.R.I.-Hop, Agent Orange Julius and Mac Flag. (Oh, the laughter)

Then, the biggest bomb of the night was dropped when Mac Sabbath did a re-tooled version of Black Flag’s “Nervous Breakdown,” with altered lyrics, might have been “Nervous Breakfast Shake,” or something similar. This deviation in their set led to a mosh pit erupting. Halfway through, they stopped the song. “We’re not going to do bloody Mac Flag songs,” Ronald Osbourne defiantly declared. “We’re not going to do ‘Fries Above’.”

Feeding off the accelerated adrenaline in the room, they launched into “Pair-o-Buns,” ending with Ronald doing an Olympic level stage dive.

A chant of “Supersize, Supersize!” echoed through the venue, and Mac Sabbath returned for the encore of “Frying Pan.”

As I made my way back to the bar get a drink, I heard Wesley Willis’ “Rock n’ Roll McDonald’s” booming through the PA, and I knew I had just witnessed the work of mad geniuses.