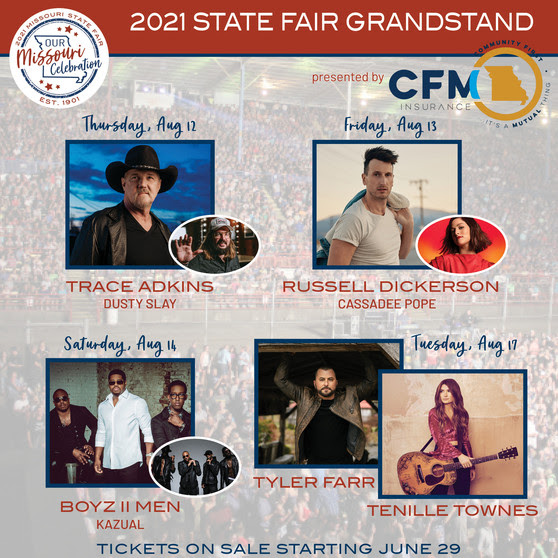 After having no concerts at the grandstand stage in 2020 due to the COVID-19 pandemic, the Missouri State Fair has announced the first four concerts for the 2021 State Fair Grandstand.

According to a news release, Trace Adkins will open the 2021 grandstand concert series on Opening Day, Thursday, Aug 12. Adkins has sold more than 11 million albums and charted more than 20 singles including “You’re Gonna Miss This” which won Academy of Country Music’s (ACM) single of the year, “Every Light in the House,” and “No Thinkin’ Thing.” Opening for Adkins is comedian Dusty Slay, the youngest comedian ever to perform on the legendary Grand Ole Opry Stage in Nashville.

The release also states Nashville-based multi-platinum recording artist and 2019 ACM Award nominee for Song of the Year, Russell Dickerson will take the grandstand stage on Friday, Aug, 13 performing his hits like “Yours” and “Blue Tacoma.” Cassadee Pope, a GRAMMY-nominated, platinum-certified singer-songwriter will open for Dickerson. Pope, the season three winner of the television show “The Voice,” has rearranged the lines of country and pop music with her platinum-selling single “Wasting All These Tears” from her No. 1 debut album “Frame by Frame.”

R&B group Boyz II Men will perform on the Fair’s first Saturday, Aug 14. Boyz II Men remains one of the most truly iconic R&B groups in music history, continuing to create timeless hits that appeal to fans across generations. The trio holds the distinction of being the best-selling R&B group of all time with hits like “End of the Road,” “I’ll Make Love to You,” and “One Sweet Day.” Opening for Boyz II Men is Kazual (pronounced Casual), a family band of three brothers and a cousin who mix the sounds of R&B, hip hop and pop together in their performances.

Finally, Tuesday, Aug. 17 Missouri-native Tyler Farr and Tenille Townes will take the State Fair Grandstand stage. Farr has three No. 1 songs – “Redneck Crazy,” “Whiskey in My Water,” and “A Guy Walks Into a Bar,” along with a growing string of hits. Townes’ first official single, “Somebody’s Daughter,” impacted country radio, and Rolling Stone heralded her as “one of country’s most promising young songwriters.”

More information, including ticket pricing for each show, can be found at mostatefair.com. Tickets will go on sale to the public starting June 29.

The final four nights of concerts in the State Fair Grandstand presented by CFM Insurance are still to be announced.

The 119th Missouri State Fair, themed “Our Missouri Celebration” will be hosted Aug. 12-22 in Sedalia.