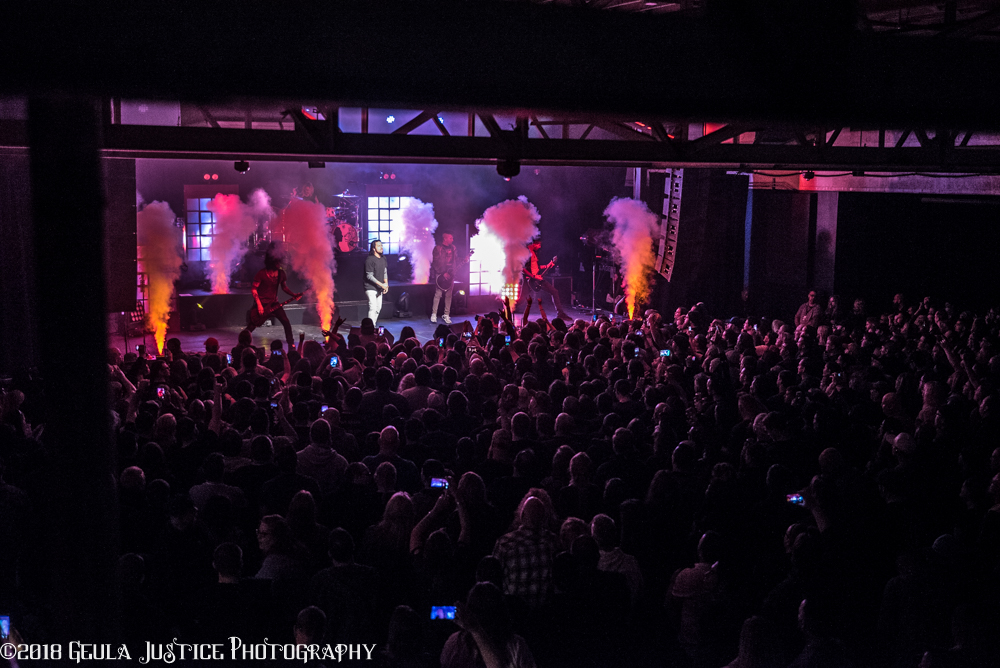 Pop Evil’s Music Over Worlds Tour kicked off its final week with a sold out, impassioned and powerful stop at The Truman in Kansas City on Saturday March 31. Along for the wild ride were the unique, throwback styling of Palaye Royal and the distinct hard rock sounds of Black Map.

Kicking off the night, in the old high school gymnasium style venue, was Palaye Royal. With a look and style that took you back to a mixture of the Rolling Stones meets Sgt. Pepper era Beatles and a fresh rock sound all their own Palaye Royale’s energy and style easily caught the attention of the crowd. Palaye Royale consists of the brothers Kropp and was formed in their teens in 2008 under the name Kropp Circle. Changing to Palaye Royale in 2011, lead vocalist Remington Leith, Sebastian Danzig on guitars and keys and Emerson Barrett on drums, embrace everything rock and roll on stage. An “Indie” rock band from Canada, Palaye Royale made sure to keep their diehard fans, known as “Soldiers of the Royal Council,” happy with deep tracks off their albums “Boom Boom Boom side A and B” while making sure to rock their hits “Morning Light” and the track “Get Higher” featured in the Samsung Galaxy commercial. Rocking the stage with high energy excitement and that smooth indie rock sound Palaye Royale were entertaining and a band to keep an eye on.

Next up on The Music Over Worlds line up was the hardcore heavy metal band Black Map. A San Francisco-based metal band, Black Map may have a simple stage show but easily make up for it with a in-your-face, hard core, percussion groove based metal sound. A three piece band with a full range sound lead by the guttural thump of Ben Flanagan on vocals & bass, backed by the hard beats of Chris Robyn on drums and accompanied by the chunk of Mark Engles on guitar, they bring no bells or whistles to the stage but do bring a huge metal sound. Unfamiliar with Black Map, I was pleasantly surprised that although they had the garage band look they were able to bring the classic metal style back with a new interpretation and energy that kept you banging your head and wanting more. In support of their latest venture a, four song EP released in February 2018, Black map brought a good contrast, with their metal, to the indie rock sound of Palaye Royale.

Next was the moment we were all waiting for, our headliner and ring leader of the Music Over Worlds Tour, the huge powerhouse band Pop Evil. No stranger to success and top charting hits, Pop Evil are riding high on the success of their brand new self-titled album and #1 hit single “Waking Lions.” Having seen Pop Evil several times I had no expectations short of it being a great show and was not disappointed.

A Michigan-based band formed 2001, Pop Evil are seasoned veterans and it shows in their performance. Sharing duties on guitar, Dave Grahs and Nick Fuelling are a great team and between Grahs’ guitar pick tricks and Fuellings’ never ending ear-to-ear smile are a show in themselves. Not to be out done Matt Deritto is a none stop dancing, hair flinging , bass twirling , groove thumping , mad man. All over the stage and one of the most interactive bass players, Deritto seems to try and make eye contact with every fan screaming for more. On drums is the amazingly talented and just fun to watch Hayley Cramer. This being the first tour Cramer is able to play tracks she laid down in the studio like “Ex Machina,” “Be Legendary,” and of course the hit “Waking Lions,” Cramer seems to have even more love and energy blasting through her killer beats. Lead by everything you want in a front man, Leigh Kakaty is one of the best in the business.

Bringing an unmatched passion to the stage, Kakaty can’t help but show his appreciation and love for the fans as he belts out every word to hit songs like “Ways to Get High,” “Boss’s Daughter,” and “Torn to Pieces.”

Together Pop Evil brings a unique and passion filled show that is filled with positive energy and great songs. Able to reach into an extensive library of hits, the group makes sure to play what the fans want to hear like the emotional tracks “Monster You Made” and “Hero” with other harder hits like “100 and 55,” “Footsteps,” and their closer “Trenches.” Kakaty makes sure to thank fans for the opportunity to bring such an eclectic line up to the masses and expresses his appreciation to all in attendance. After their very impressive, high energy, emotion driven show a moment that sums up Pop Evil’s heart was after their show when Cramer found one of their youngest and biggest fans in the front row and presented her with a pair of drumsticks.

The Music Over Worlds tour with the classic feel of Palaye Royale, hardcore metal sounds of Black Map, and the never disappointing Pop Evil is a sure bet for a great show that will leave you wanting to follow them on tour just to live another night in their world.

For the latest in arts and entertainment news, be sure to follow Central Mo News on Facebook here.