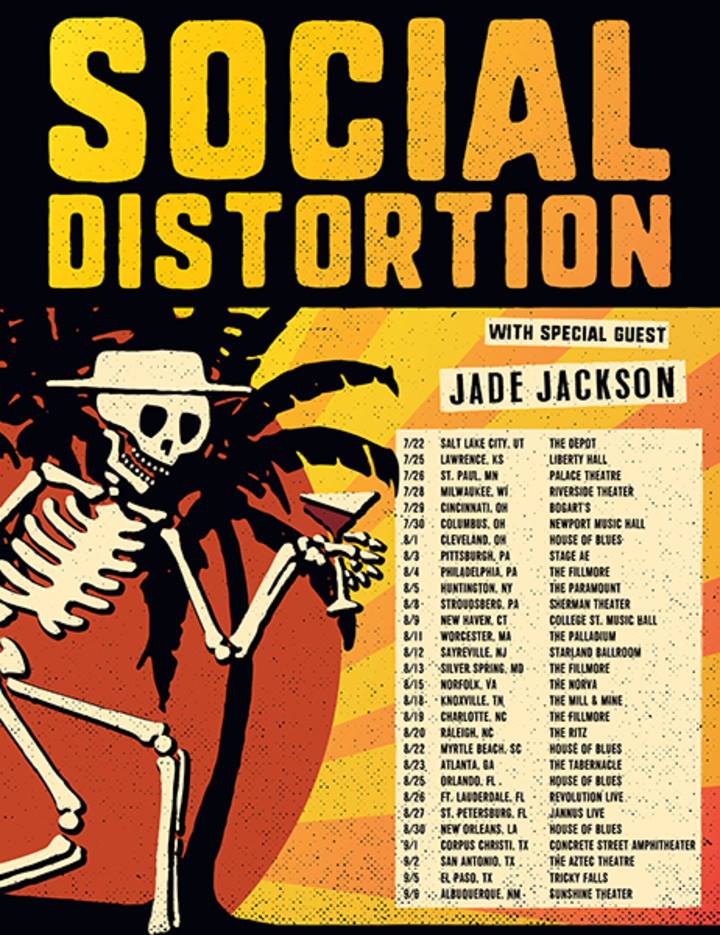 In the sweltering July heat, Social Distortion brought their own brand of scorching rock and roll intensity to Lawrence Kan. at Liberty Hall last Tuesday. Hearing about the show a month in advance, I knew I had to go.

Social Distortion is a band I first heard when I was a teenager, yet they were never a favorite. I was a casual listener. I had “Mommy’s Little Monster,” their first full length LP from 1983, on vinyl and 1996’s “White Light, White Heat, White Trash” on cassette.

I didn’t listen to their music incessantly, like I did with bands like Black Flag and Minor Threat. The punk sub-genre I most fancied was the hardcore, the loudest, angriest and most aggressive bands is what did it for me.

Sure, Social Distortion has loud guitars, but there was also a sense of melody with their music. They weren’t the 100 miles-per-hour thrash punk, which by the mid ’80s, by and large, had become self-parody. With the release of 1988’s “Prison Bound,” Social Distortion began displaying influences that most of their California punk peers did not, namely, blues, old country and rockabilly.

Mike Ness, Social Distortion’s founder and front man, falls somewhere in between Johnny Cash and Johnny Ramone. After the opening act, the Jade Jackson Band, the curtain went down and then was lifted. Social Distortion entered the stage greeted by the roar of the audience. The place was packed.

The band immediately launched into “Still Alive,” and it was full throttle for the next 90 minutes, with Ness taking time in between some of the songs to engage in on stage banter.

The sight of Social Distortion live was one to behold. The band was so sonically cohesive. It’s as if they were running like a well-oiled machine, with each member of the band in perfect synchronicity with the others. It was downright mesmerizing.

Ness was all over the stage during the performance, with a hyperactive yet controlled strut.

Their set spanned Social Distortion’s 38 year repertoire, from the old school to more recent material – The band presented a balanced blend. Of course, they rocked out the standard favorites that turned into sing-a-longs, songs like “Ball and Chain,” When She Begins” and “Story of my Life.”

Much to my delight, a more obscure gem was hurled at the audience midway through the band’s set. They launched into “Mass Hysteria.” The song was originally released on a 1982 compilation album titled “Someone Got Their Head Kicked In.” It is a no frills, up-tempo three-chord punk song. I was left awestruck hearing Social Distortion perform this song in 2017, and it sounded exactly like the recorded version I first heard at age 18.

They weren’t done bringing out the tunes from the early days, as the band launched into “ An Hour of Darkness” as the night was winding down. Ness told the crowd good night, but they wanted more and began chanting “Social D, Social D, Social D.” The band came back and started the encore with “Angel’s Wings.” This song live was so moving and powerful. I caught the chills, one of those moments when hearing a song causes the hairs on the back of your neck to stand up. Two more, then it really was time to go, as they brought the house down with their cover of Johnny Cash’s “Ring of Fire.”

Seeing Social Distortion in sweltering summer heat was a truly magical experience. Finally hearing these songs live increased my appreciation and excitement for them. It was as if I had re-discovered their music all over again and fell in love with it.