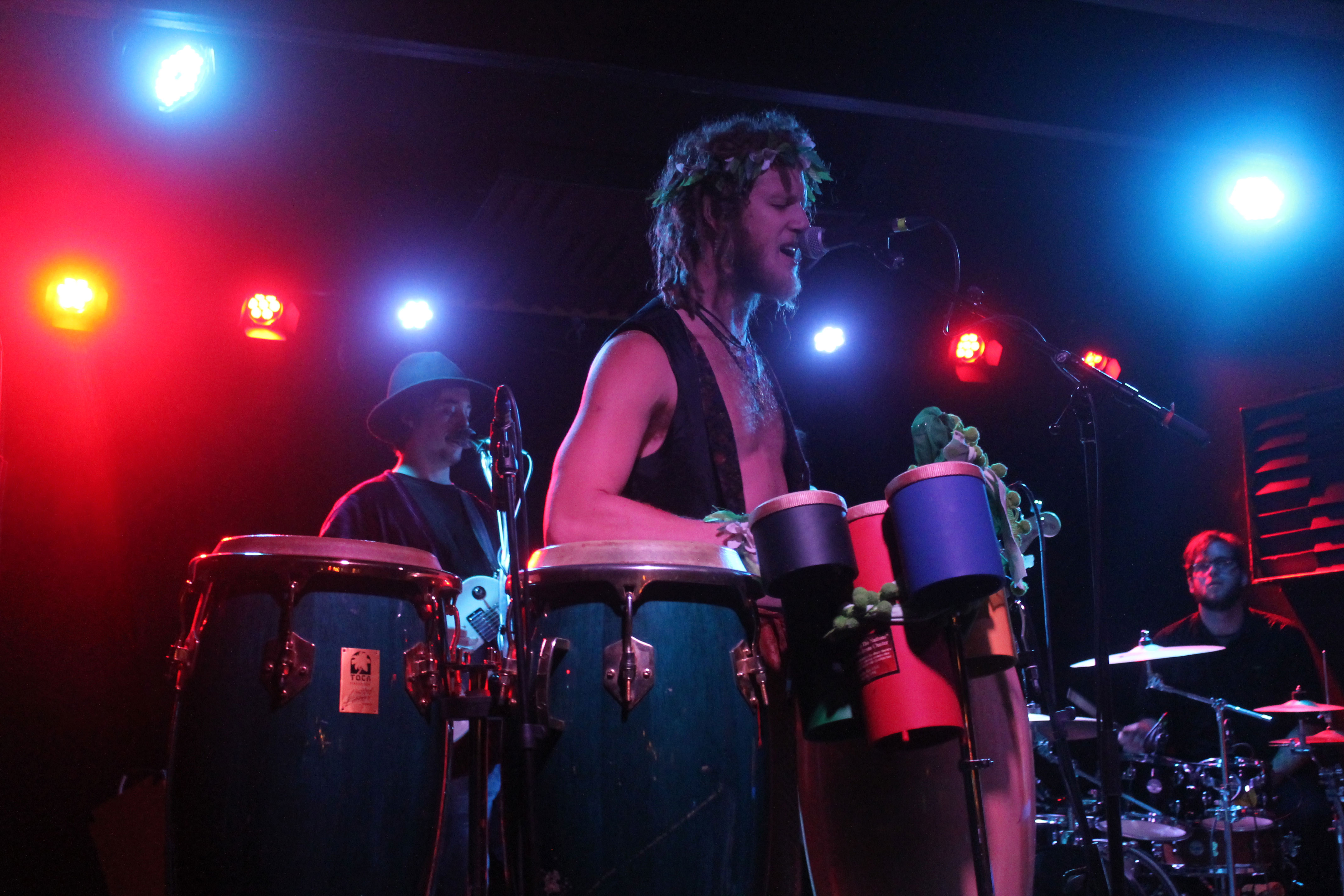 During the dwindling days of summer, Thursday Aug.23 to be exact, Columbia, Mo. funk jammers, Catdaddy’s Funky Fuzz-Bunker Band (often referred to as Catdaddy by fans and friends alike) brought the get down one more time before the end of the season at the Rose Music Hall.

The band with a name that sounds like a tongue twister, serves up a potent form of auditory gumbo. It’s a mixture of musical influences, heavy, heavy doses of funk, a little bit of reggae, a little bit of jazzy improvisation.

Lead guitarist, Christopher Fritschle declared the amalgamation to be a result of the members of Catdaddy’s Funky Fuzz-Bunker Band being music lovers.

Sprinkled among the groove laden sensibilities are wailing guitar leads from Fritschle – he is able to bend and twist notes and chords with a hard rock fortitude at times.

Regarding his guitar playing, he said he was influenced by listening to guitar greats, yet he also places an emphasis on a sense of originality, instead of trying to recreate the exact sound of the guitar players he grew up listening to.

I guess Catdaddy is what you would call a jam band. This is a genre of music that the teenage punk rock me wouldn’t have touched with a ten foot pole. But times change, and to listen to only one genre of music is to a disservice to one’s self.

Given the eclectic mixture present in Catdaddy’s sound, the Rose Music Hall seemed to be the perfect locale. It’s a place I’ve quickly fallen in love with in a short period of time. It’s known for a wide array of sounds and styles hosted on their stage.

“We definitely wouldn’t be playing shows in town if it wasn’t for Rose,” Fritschle said. “They started booking us at the open mics (starting in 2014). Rose is always down to open the doors and give bands a chance.”

With no other bands on the bill, Catdaddy’s Funky Fuzz- Bunker Band worked their groove into overtime, delivering two sets, with a brief break in between. One song flowed into the next, with velvety smooth transitions. An underlying philosophy and reason for this free flowing connection from one song into the next exists.

“We try not to stop and take break. We want the whole set to be a flowing piece of music,” Fritschle said.

When Catdaddy is immersed in their groove, it becomes noticeable the members truly feel what they are doing. The vibe became contagious, enveloping the whole room. This was evident by the bevy of bohemian beauties congregated close to the stage shaking on down.

The seemingly psychic synergy that can emerge from live music was present in Catdaddy’s playing, that reciprocal reverberation in which the audience wholeheartedly responds to what the band is giving out.

“We want (the audience) to feel like they are a part of what’s going on stage as well,” Fritschle said.

All of the musicians in the group played with a connected synergy, but a lot of the focal point of the performance was lead singer Joseph Edwards. He stood on the left hand side of the stage, with an arrangement of conga drums in front of him.

The arrangement resembled a podium, as Edwards came off like a shaman of sound, delivering his message to an energized, ecstatic congregation, emoting his vocals into the microphone, with a near constant smile on his face, making direct eye contact with members of the audience throughout the night.

“That’s something I try and conceptualize every time I go on stage. What can I do to transcend the performer to audience barrier?” Edwards explained. “People want to go there, and they want to transcend what their normal days are like.”

The talent emanating from the band was undeniable – they could go high, they could go low, they could switch tempo and direction at the drop of a hat. As I watched Catdaddy go, I thought because of the skill and talent on display, they must have honed their craft for some time.

“We’ve known each other since high school,” Fritschle said.

Catdaddy came into being in 2014. Their set was truly a mixed bag, instrumentals stood alongside their originals and more than a few covers.

Some of their cover selections were a little eyebrow raising. Going into a cover of Ween’s “Voodoo Lady” wasn’t all that surprising, but their cover of R.E.M.’s “Losing my Religion” threw me into a state of pleasant surprise.

What they did with the song was nothing short of musical alchemy. They took a song from one of the standard bearing alternative rock bands of the 1980s and into the ’90s and reworked the song’s sonic texture. Catdaddy’s version was elongated as they kept on riffing and going into extended instrumental interludes.

“We heard a combination of remixes online of that song, and we kind of took our favorite parts of each one,” Fritschle said. “Sometimes we’ll cover a song note for note, sometimes we’ll add a new vibe to it or add a new element.”

As the clock ticked closer to last call, I took full assessment of what I had just witnessed. It was a musical encounter like I had never experienced before.

When introducing myself to Edwards that night, I couldn’t help but tell him that the name of his band sounds like a tongue twister. His reply was that they were the band with the name that’s hard to remember but with a live experience you won’t forget.

Listen to our interview with Catdaddy’s Funky Fuzz-Bunker Band below via SoundCloud.