LATEST NEWS
07:28 AM
Home Entertainment Concert The ‘Future is Female’ Tour kicks off in KC featuring Halestorm, In This Moment, and New Years Day 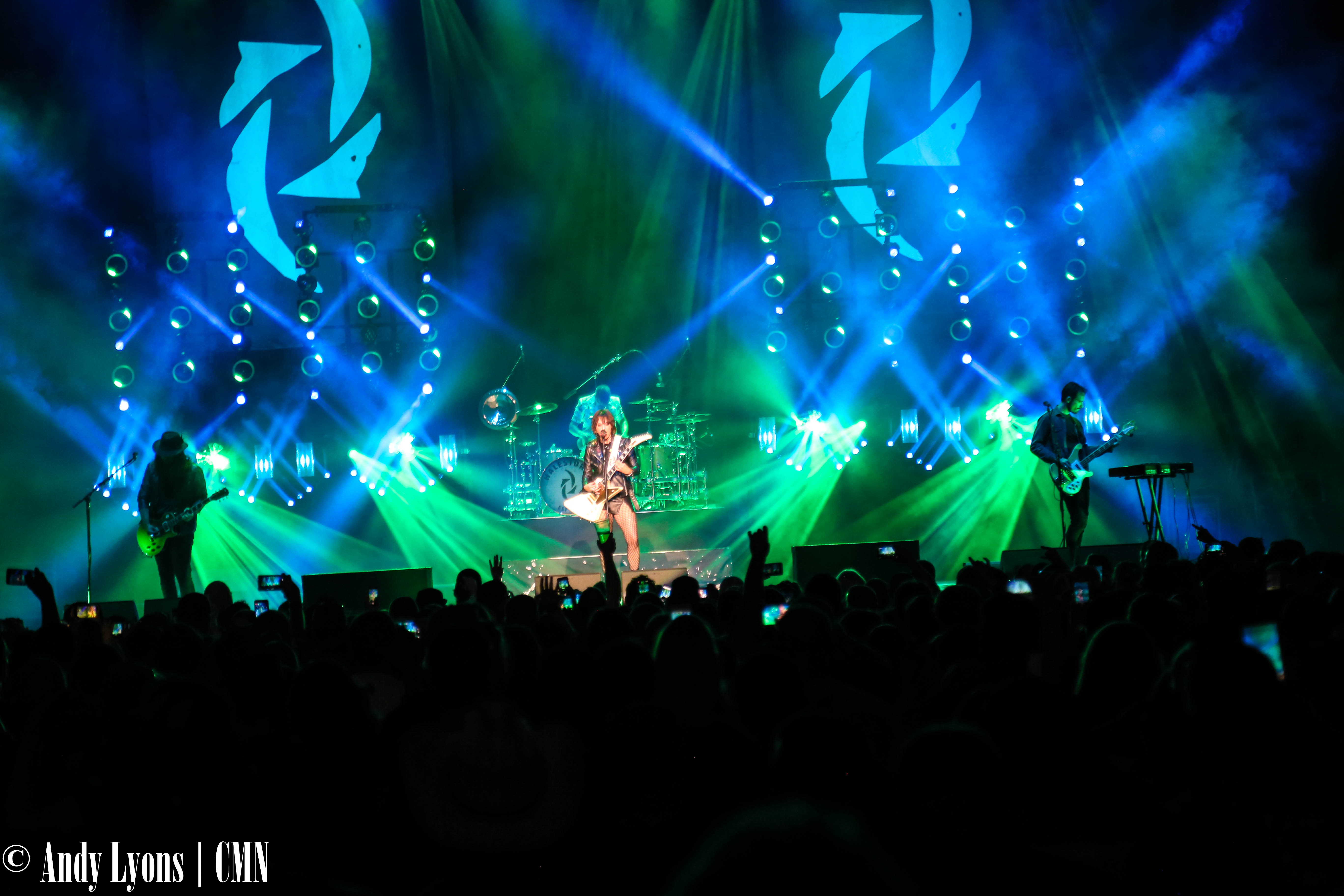 The ‘Future is Female’ Tour kicks off in KC featuring Halestorm, In This Moment, and New Years Day

The energy in the air was extra electric last Friday and it wasn’t just because of the blood moon – the crowd at Silverstein Eye Center Arena was all abuzz about “release day.” Halestorm’s highly anticipated and highly reviewed album was released in sync with the first night of the tour, and pre-orders for “Vicious” were through the roof.

There is no better way to start off a weekend than with what Lzzy Hale coined as #thefutureisfemale tour: three of the hardest working front women in the business and a spectacular, emotion-filled, energy-driven night of amazing musicians and theatrics.

Central Mo News talked with Ash Costello, vocalist for the Anaheim, California-based New Years Day. Costello discussed how proud, humbled and excited she is to be included on the tour. She discussed her early beginnings in 2005 on MySpace, how much she has grown as a writer and performer, the difference from her early years to present day for women in metal, and her favorite video games. (Dogs and cats were discussed, too, of course.)

Costello talked about her most recent album “Diary of a Creep.” It includes tribute songs such as No Doubt’s “Don’t Speak,” a duet with Lzzy Hale on “Only Happy When It Rains,” Pantera’s “Fucking Hostile,” and the song “Disgust Me,” which includes a video that just dropped and is burning up the Blabbermouth and Loudwire headlines with excitement.

Costello said the song “is about seeing the side of someone that they tend to hide” and finding the courage to show that side. She said she’s excited about the release of the video, which has been done for about a year and was “the hardest video to get released.” She described it as her opportunity to tell a little of the story of her iconic two-tone colored hair.

“Our job is to get the crowd awake, active, ready to give everything. So we really call on a lot of audience participation,” Costello said of the responsibility as the opener.
New Years Day did just that as guitarist Nikki Misery, bassist Frankie Sil, drummer Brian Sumwalt and guitarist Austin Ingerman took to the stage to an enthusiastic crowd followed by roars for
Costello as she took her place on her podium.

Not wasting any time, Costello and her band grabbed the audience by the throat and rocked them from the first track to the last. As the opener, there’s not much time to make your point but New Years Day didn’t have a problem getting the hair and horns flying.

A highlight was their performance of the Pantera track “Fucking Hostile.”

“Vinny (Paul) did get to hear it and liked it,” Costello told the crowd with a heavy heart. She expressed how lucky she was to finally make the track in the face of the naysayers, meet the man, receive his kindness and thank him for his music.

Costello fronts her band of wildly-talented musicians like she was born on the stage. Wielding the crowd like a seasoned pro and firing up their emotions, New Years Day are the perfect fit for a lineup of face-melting musicians.

Not many bands bring such passion, love and criticism for their music and theatrics as co-headliner In This Moment. A Hollywood-based band formed in 2005 by guitarist Chris Howorth and vocalist Maria Brink, ITM has been hitting new levels of success with each new album and subsequent tour. Selling out venues worldwide and setting a new bar as to what a show should look like, In This Moment are more than just a band to see live – they are an event you must experience live.

Their show awakens all the senses and gives you more than most. In This Moment would not be the phenomenon they are today if not for their band of brothers – the “Faceless Freak” Travis Johnson on bass, “War Machine” Randy Weitzel on guitar and “Mr. Do You Think I’m Pretty” Kent Diimmel on drums.

The visuals of an In This Moment show are a force to be reckoned with and are brought to life with the breathtaking choreography of the two “blood goddesses” that silhouette Brink throughout her heart-wrenching performance as she uses her incredible voice to bring you into the Ritual.

As the black widow banner was drawn to the ceiling to hide the stage, an In This Moment staple, the anticipation was at an unmatched level. The excitement reached mountaintops as another staple for ITM, Journey’s “Don’t Stop Believing,” played through the PA and sparked an instant sing along. When the curtain dropped, the stage could be described as a Wicca ritual, set in the woods among the roots. The band struck hard with their first track, fan favorite “Blood.”

Brink likes to stick with hits from the latest albums in her set list including other “Blood” tracks such as “Adrenalize Me” and “Whore.” They bring hits from their album “Black Widow” as well as heavy attention to the tracks from their latest album, 2017’s “Ritual.” With “River Of Fire,” “Oh Lord” and the Phil Collins tribute “In The Air” showcasing the evolution of their sound and look, the band throws in an amazing rendition of their Rob Halford duet “Black Wedding;” sung with Ash Costello on tour, it is epic.

The shared guitar duties of Howorth and Weitzel are a force in themselves as they wield solos like light sabers and are Jedi of their craft. “These dirty gentlemen are going to have a little fun with you,” Brink said as Johnson, a master himself, started off the medley.

A portion of the show that highlights the band with a medley of their favorite Metallica tracks makes for a great moment during which fans can’t help but scream “die, die, die” in unison. Not to be left out in the cold, Diimmel is a beast on the beats and is highlighted with a soul-crushing solo just before they bring back the queen.

Brink and the guys have made a habit of closing their show with the pain of power anthem “Whore” and did not disappoint as they performed it like you heard it for the first time.

The aptly named album, “Vicious,” describes Halestorm frontwoman Lzzy Hale to a T, as she is indeed that: just plain vicious. Was it coincidence that the stars, moon and dates all aligned or was it the will of the rock gods? Either way, it set the night up for an unforgettable performance. Joined on stage by guitarist Joe Hottinger, bassist Josh Smith and drummer Arejay Hale, Lzzy commands the attention and respect of her crowd.

Arejay and Lzzy have been writing and performing music since 1997 when they were 10 and 13 and it shows as there is no one better at what they do. Musically, Halestorm brings straightforward, heart-filled rock and roll with an edge that grabs you from the first note. On stage, they are the apex of talent and showmanship and reach every member of the crowd to make each one feel special.

Beginning the set with the live debut of “Skulls,” Halestorm started kicking the crowd right in the teeth with a blazing set including other live debuts of “Killing Ourselves to Live,” “The Silence,” “Vicious,” “Do Not Disturb, and a special version of “I Get Off.”

Halestorm rocked what the crowd needed with hits “Love Bites,” “I Miss The Misery” and “Freak like Me.”

Hottinger and Smith own their roles in Halestorm, each on different spectrums of performance. Hottinger has a high energy, classic “on a hill, wind blowing through your hair” style as he rocks the crowd with ripping solos, while Smith has a more low-key, “I’m your best friend” style that takes over the beat of your heart. 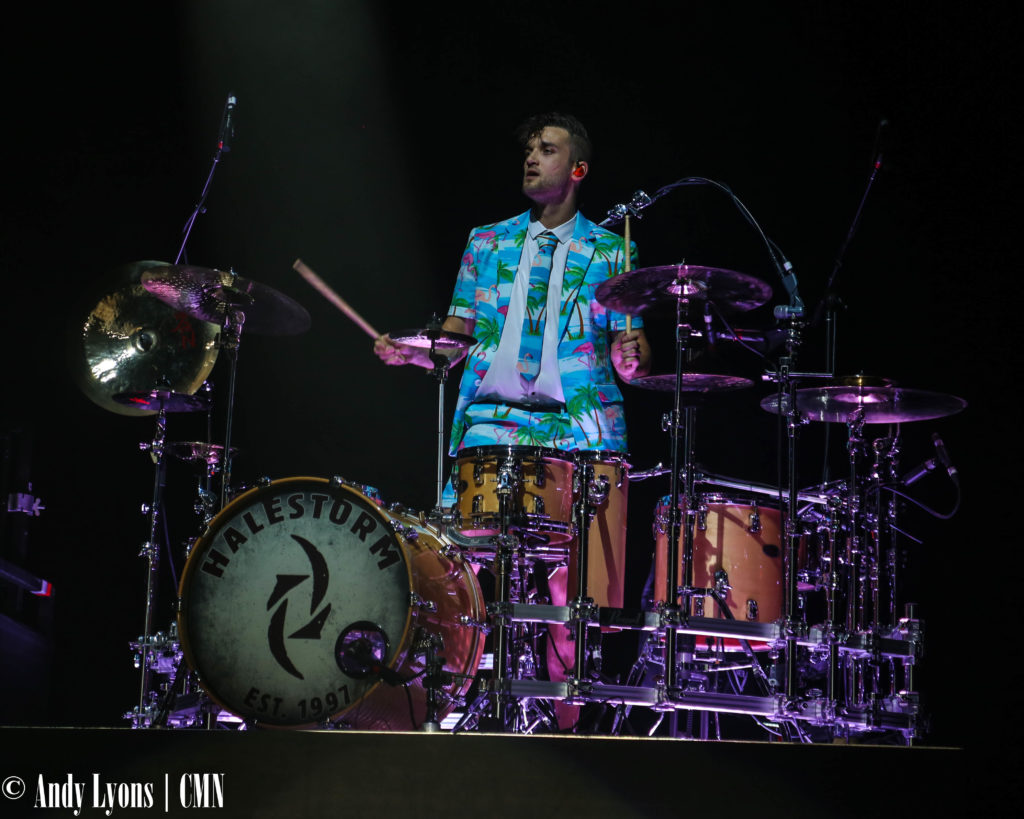 No one would disagree that Arejay Hale is one of the most explosive drummers to take the seat of a band. They made sure to give him time for a magical and interactive solo where he brought out the classic “BIG STICKS” to a deafening roar from the crowd.

Arejay told CMN later that evening he already had a rock tale from this tour. It turns out there was something slippery on the stick and Arejay showed off the “goose egg” on his forehead from a good, solid whack from a big stick.

Already riding high on an exhilarating performance, Halestorm gave the crowd an encore that included “It’s Not You” and “Here’s to Us,” a hit that says “F you” to haters and “love you” to supporters.

As Costello said, this tour shows “females are to be recognized and not fucked with anymore.” The ladies with their bands did just that in proving beyond any shadow of a doubt that they are indeed metal – and here to take over.

View our extended gallery via SmugMug here. Listen to the interview with Ash Costello in its entirety below via SoundCloud: