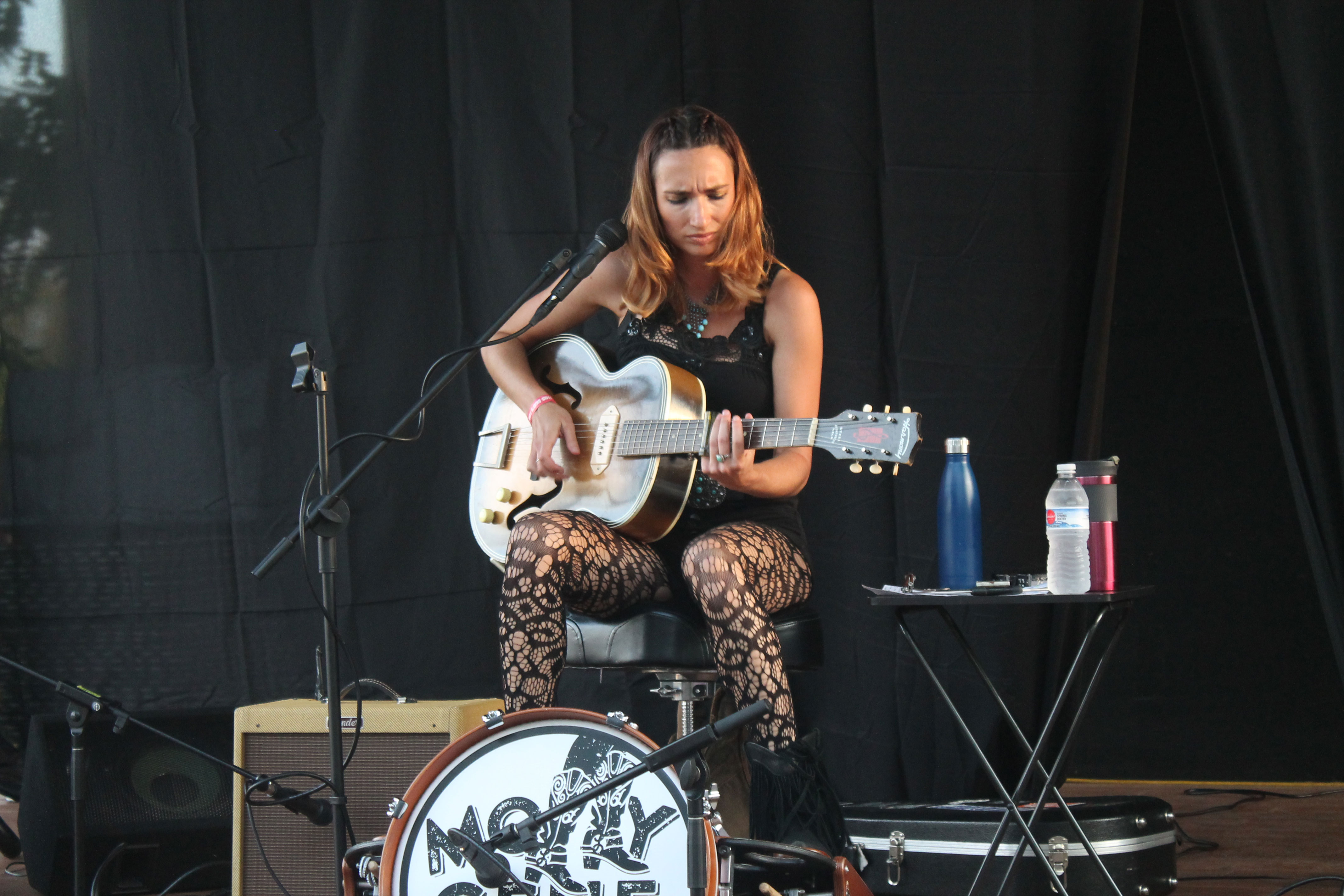 The Musical Magic of Molly Gene

Somehow, a year had passed since I last saw Molly Gene One Whoaman Band rock out on stage and melt faces with her Delta Thrash ways. I knew it was past time to catch up, which meant a trip to Columbia. Mo. on Saturday, July 28.

The event wasn’t a run of the mill rock show – it was something called Sideshow Carnevale IV. It was in Rose Park, a sprawling piece of land connected to Rose Music Hall. Molly Gene was the only featured musical act performing at this soiree, nestled amongst jugglers, comedic skits and the fire performers of the Burn Circus, which was the finale of the night.

“The guy who organized this festival asked me to do it, and I said yes,” Gene proclaimed. “It’s a circus type of show, and it’s mostly kids here.”

I’m not quite sure of what the child to adult ratio was at the event, but it was family friendly, ergo a lot of families with kids were there. In response to an altered audience, Gene chose to alter some of her lyrical content.

“I bleeped out a few words,” Gene said. “I’m not like dropping the ‘F’ bomb every five seconds or anything like that, so I think it’s everything’s fine.”

As she took to the stage, a few had gathered by the metal barricade in front, while most of the crowd was further back on the lawn. This was a disorienting setting. I was used to seeing Molly Gene One Whoaman Band in a dive bar, with drinks flowing, not an environment where the sun was still up at 7:30 p.m., one in which hot dogs were being consumed, jugglers were tossing pins and bubbles were being strewn into the air and a considerable amount of tie dye was on display.

I write this free of condescending snark, in case of any misinterpretation. The festival was a wonderful experience, all of it, but my main reason for attending was to see Molly Gene.

While checking out her set, I thought I might have been observing another stage of her metamorphosis. Some of her usual standbys were absent, and more than a few newer, yet to be recorded, songs were thrown into the mix.

She started with that one oven song.

“I have so many songs that I’ve written and learned that I have not recorded – I need to put out a new album. I could put out probably two new albums with all the material I have,” Gene said.

Although it’s been a little while since a Molly Gene studio album has seen the light of day, she’s been treating fans to views of her ongoing musical development, as she uploads brief video clips to Facebook of her developing new riffs, songs or doing unexpected covers.

One clip I was pleasantly surprised by was a video of Molly Gene doing a portion of Bruce Springsteen’s “Atlantic City.” The song originally appeared on Springsteen’s 1982 “Nebraska” album. It’s a song with a sonic texture that has next to nothing in common with the more commercial hits on “Born in the U.S.A.”

Gene stated she more so associates the song with The Band, who covered the song, which is the version said she gravitated toward. I was surprised with her covering this song because I don’t hear a noticeable Springsteen influence in her music.

Molly Gene’s musical influences and inspirations aren’t drawn from only one source. She built her name on a hybrid sound she christened Delta Thrash, the soul of Delta Blues combined hard rock ferocity, but recently other influences have come to surface, some of them not as rowdy and hard driving.

“I like variety,” Gene explained “I started out playing folk music, just a guitar. I was obsessed with Dylan and Neil Young.”

The fans who have witnessed her musical evolution through the years might be curious as to what a new album could sound like. If I were to speculate, I don’t think it will be a carbon copy of the “Delta Thrash” album, or any other previous releases. The ability to incorporate varied influences while maintaining her own unique, anomalous sound is what makes the music of Molly Gene so special.

A powerful musical amalgamation was displayed that Saturday evening in Columbia – it was present in the furry and frustration of “Waiting.” It was also present in her version of “Amazing Grace,” all awash in juxtaposed waves of amplified distortion and serenity.

Something rare is contained within the live performances of Molly Gene One Whoaman Band. When you’ve seen a lot of live music, you can tell when someone is just going through the motions, for a check or to pass the time.

You can also spot when a musician is baring his or her heart and soul on stage. These are the moments when musical expression becomes like magic, when it becomes more than notes and chords and an auditory algorithm. When music takes on a metaphysical quality, it’ not just something that is listened to, but something the listener feels.

After some thought, I figured out just how Molly Gene fits in a circus type of, carnival festival environment – she is doing something spectacular.

Listen to our interview with Molly Gene in its entirety via SoundCloud below: