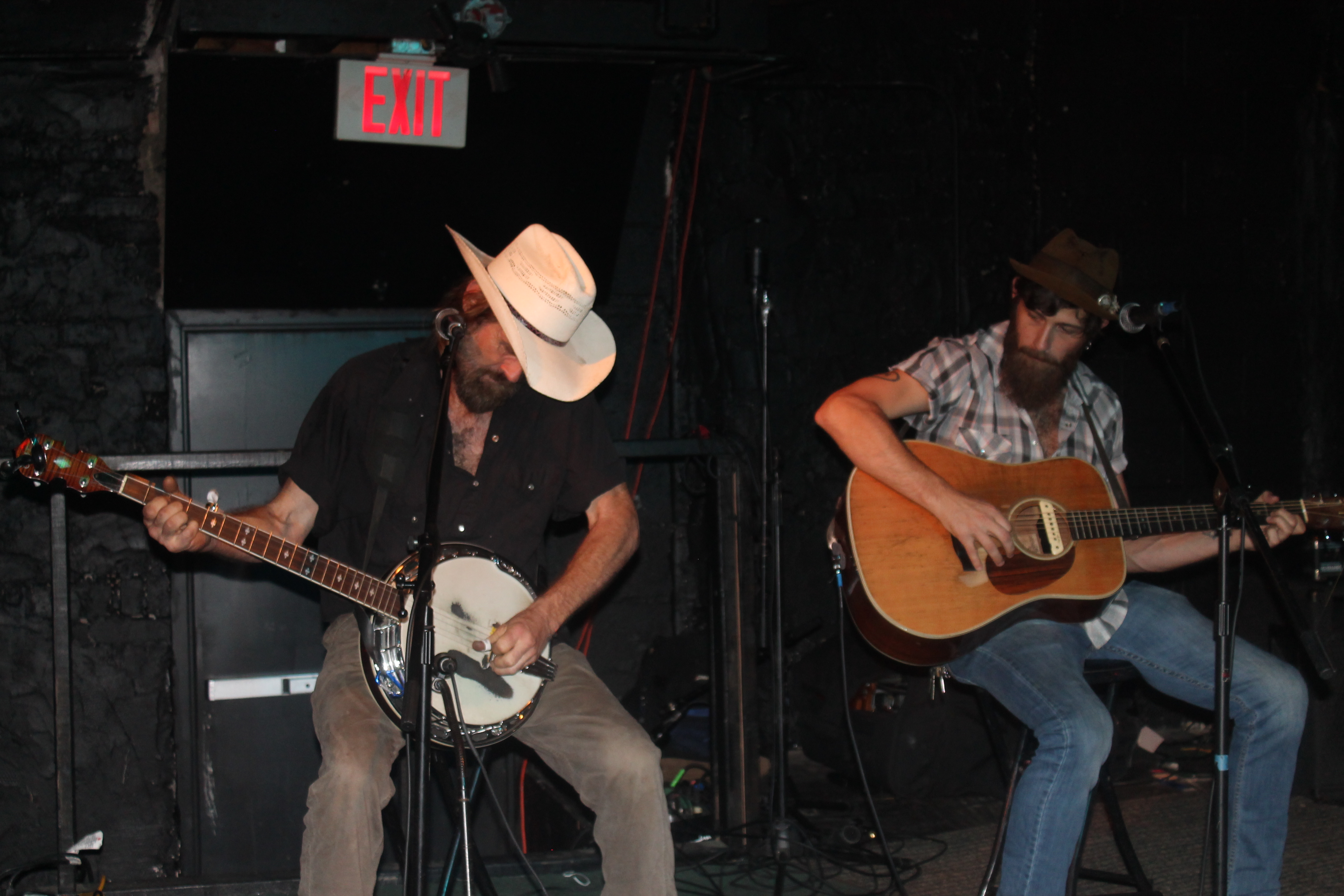 Twilight Time at The Bay: With Manda Shea, Molly Gene and Mountain Sprout

The mood was both jubilant and somber during the closing days of The Bay in downtown Warrensburg, Mo. The bar’s patrons and the musicians who have graced The Bay’s stage all prepared for the inevitable end after the closing of the venue was announced two weeks ago.

I missed the much-anticipated Left Lane Cruiser, but I made sure to visit Thursday, June 29. The lineup exemplified the eclectic nature of The Bay – the high-energy bluegrass of Mountain Sprout was on the same bill as Molly Gene One Whoaman Band, with Manda Shea and the Sumpthin Brothers opening.

Manda Shea and the Sumpthin Brothers were steered by soulful, songbird-like vocals of Amanda Bliss, along with husband Mark Bliss also covering vocal duties. Their set consisted of a mixture of originals and covers.

“We’re eclectic people in general, and we all like different types of music, and bluegrass is very inclusive in general, so we can kind of bring in a lot of different influences,” Mark Bliss said.

Their choice of covers used a form of audio re-arrangement. By doing a cover of Sublime’s “Santeria,” which could be seen as a generic choice, with change of tempo, instrumentation and genre, they re-worked the song and made it more like their own.

Then came Molly Gene One Whoman Band, returning to The Bay’s stage after being back home in the ‘Burg from her recent tour.

She informed the crowd that the first song of her set was about cooking, “which really means it’s a song about fucking.” I might have laughed upon hearing that. The repeated theme in the song was something about keeping an “oven” clean. The song was laden with the type of double entendre that would have made Chuck Berry and Bon Scott proud.

I’ve seen Molly Gene live numerous times, but this time her set differed slightly from what I had previously encountered. It seemed like a few new songs were added, and some of my favorites like “Uncle Sam” and that one AC/DC cover were absent, but musicians grow and evolve. I’d assume when a new song is written, yet not recorded, the maker of it wants to share the new creation with an audience. 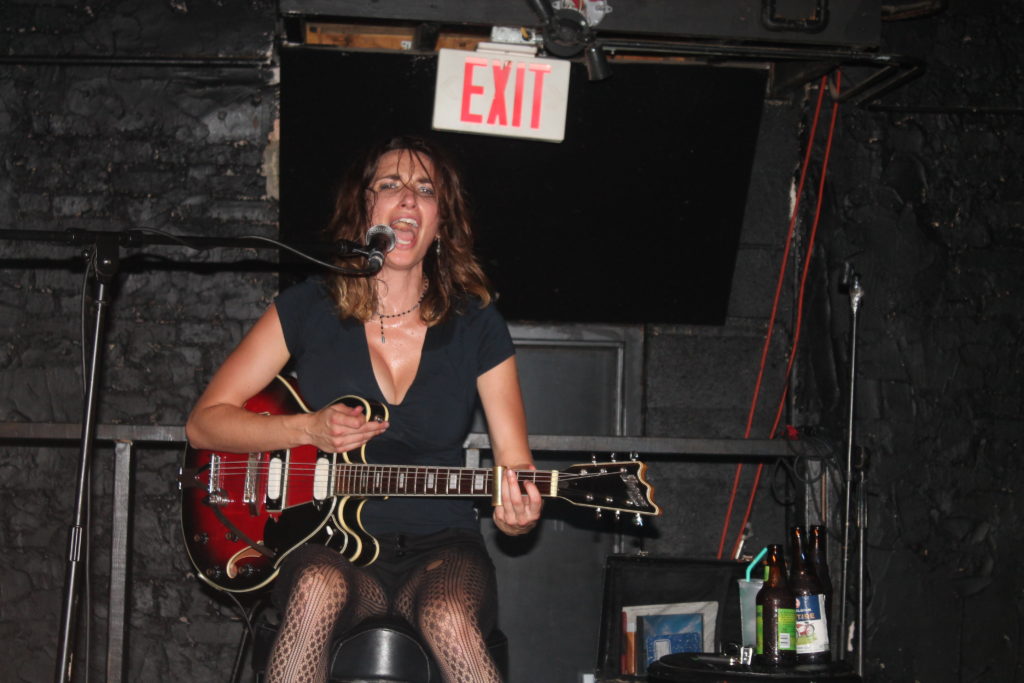 Seeing new songs performed can be like watching a form of musical evolution. Another new song she played was “Easy.” Molly Gene explained its origins came out of a project she did for a psychology class that featured an analysis of Muddy Waters. However, her set was not only new songs. Many of her standards like “Kiss Me Quick” were there too. All the explosive ingredients of a Molly Gene show were distilled and hurled at the audience like a controlled sonic blast.

As it was her last show at The Bay, Molly Gene told the crowd about the importance of the venue. She explained the personal significance of the venue and her thoughts on its closing.

“My first shows were at The Bay, and now (music) is what I do for a living, so (The Bay) has a lot of meaning to me, but that’s life, nothing ever stays the same,” Molly Gene said.

After she wrapped up her set, the headliners, Mountain Sprout, took to the stage. I had heard the name a couple of years ago. They’re a bluegrass group, not a genre I’m all that interested in or have much exposure to. Last year, a co-worker told me I would like them — I was skeptical.

But as the twilight of The Bay drew closer, I decided to check out Mountain Sprout, all the way from Eureka Springs, Arkansas.

They took to the stage like a band of renegade mountain men.

This was bluegrass, but I don’t think it was the typical bluegrass. The whiskey-breathed vocals of Grayson Klauber, who was singing songs soaked in raunchy rebellion while throwing down lightning-like rapid-picking on the banjo, were backed up by a thumping back beat on an upright bass, harmonica jamming, guitar and fiddle.

Mountain Sprout delivered a rip-roaring, high-energy, high-octane brand of bluegrass, and the audience was willing to reciprocate the vibe. A mass huddle of bodies, complete with beards, dreadlocks and tie-dye, joyously flopped and bobbed all over the dance floor.

A little ditty titled “Screw the Government” received a most raucous response, with fans singing along and occasionally raising middle fingers. At one point the commotion in front of the stage was so lively and energized, I was left to stand on top of a chair a couple feet back to get decent pictures of the band.

For the last song, Mountain Sprout shifted gears from their up-tempo bluegrass as they slipped into a cover of Credence Clearwater Revival’s “The Midnight Special.” In the hands of Mountain Sprout, this sleepy classic rock gem took on a gospel-like feel.

As I walked out of The Bay for the second-to-last time, I thought “Wow, I just saw a Bluegrass band and enjoyed it.”