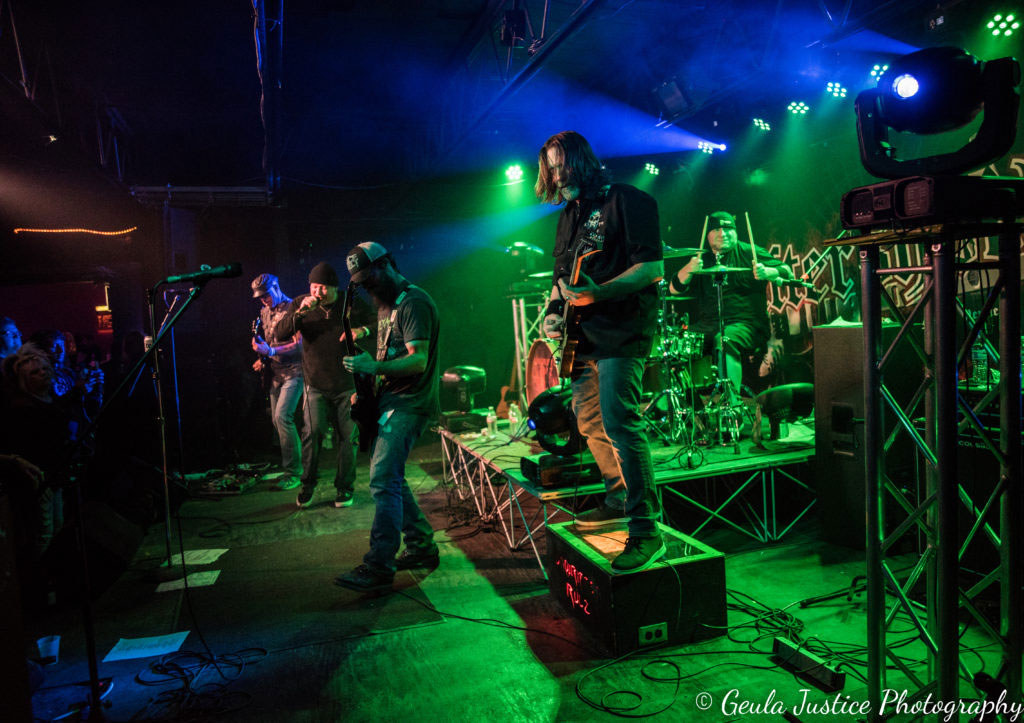 After nearly three years, Kansas City rockers Unwritten Rulz released their fourth album “I Know My Rights” on March 15 with a CD release show April 12 at Aftershock in Merriam, Kan. The show featured other local and regional bands Bonespur, Grind, Drek, and I’m With Stoopit.

Before the show, guitarist Richard Bullock, guitarist Bryon Coatney, and drummer Patrick Garrett sat down with CMN to discuss the album and putting the show together, highlighting the new album and some local talent.

The members of Unwritten Rulz said once they started making original music in 2009, they had a plan to release an album every two years as a way to get new material to their fans. But following a plan is never easy, especially in the music industry.

“We screwed off all those years,” Bullock joked. “Because we’ve been trying to do an album every two years, and usually we’ll start it when we finish this one we’ll go ahead and start writing on the next one. Procrastination kicked in and we basically did it over a summer.”

As digital downloads and streaming are becoming more popular, many bands release new material in chunks. Drummer Patrick Garrett said the band wanted to go with what they know – releasing a full-length album.

“It’s 15 songs long so it’s a full length album,” Garrett said. “Anymore bands put out EPs or a single here and there, but we’re old and old school so we just decided to do 15 all at once.”

The group has drawn all sorts of comparisons – including to huge rock bands such as Godsmack and Metallica. But Garrett explained they just are who they are.

“I Know My Rights” was recorded at Westend Recording Studios with Rob Rebeck as the engineer. Bullock explained the group went into the studio on a Friday and left on Sunday, and did the same the next weekend and the album was finished with principle recording. Garrett said Rebeck really helped drawn the sound out of the band to produce what fans hear on the album – which was actually recorded as the members played it live together.

“We’re pretty much a live brand, no thrills, no click tracks, let’s just play and go for it,” Garrett said.

“We’ve been playing together for so long that we can’t play without each other.. in a musical sense,” Bullock added with a laugh.

The album hits hard and fast from the get go, with the title track going full force. Yet the album has a natural ebb and flow to it. The album lets up when it needs to and presses ahead pedal to the metal just as quickly.

“We were trying to watch for a good flow of things from point A to point Z and everything in between and what would flow well with each song,” Bullock said.

“You can’t piece an album with 15 songs on it all the heavy hittin’ stuff at the front, then the not so heavy stuff then the more ballady stuff at the end,” Garrett added. “You can’t do it that way, you gotta have a flow to it you have to mix and match. You want to keep the listener wanting to hear what’s next.”

The group said they have had a lot of positive reactions from people regarding the new album. The thing that surprised them the most is that there wasn’t one song fans were raving about. They did say they have heard the most about “Drive,” “Fuck It,” and ballad “Cry Me A River.”

“That’s a song that seems to touch people, ‘Cry Me A River,’” Coatney said.

While Unwritten Rulz will be playing around the Kansas City metro throughout 2019, they are looking elsewhere this summer.

Unwritten Rulz will be playing shows in Arkansas and Springfield, Mo., as well as stops in Tulsa and Omaha in June as well as the Leather & Lace Rally in Lathrop, Mo. on July 20. For more, follow them on Facebook here. Listen to our interview in its entirety below via SoundCloud.