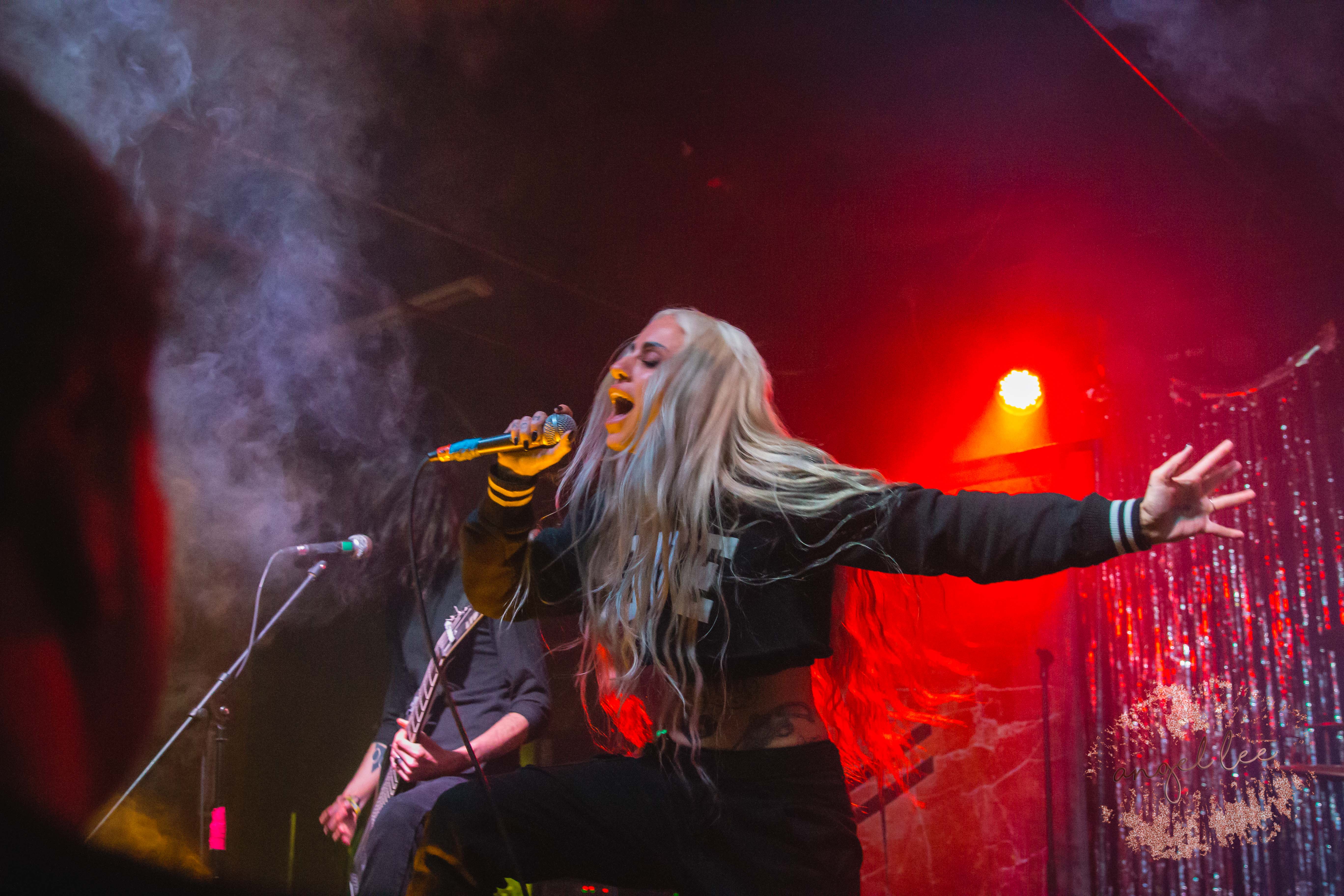 For fans of live music, April 14 was a night to file in the record books as the Outland Ballroom in Springfield, Missouri, played host to L.A.-based Stitched Up Heart. Out on some headline warm-up dates for what might be its biggest tour to date with Godsmack and Volbeat, SUH was joined by Darling Mathias and B.I.V.

Kicking off the night was Darling and before she hit the stage Central Mo News talked with her about the set list, show jitters, relationships on the road and new music and videos.

As the opener she was joined in an acoustic set with Decker on drums and Randy on bass, both of Stitched Up Heart.

“I still get pre-show jitters but I think it’s more excitement than anything,” Darling said as she talked about mixing up covers with originals for her set.

She also talked about her work with producer Sahaj Ticotin (Stitched Up Heart, “Never Alone”):

“I’ve actually been spending the last year in the studio with a cool friend of mine, making my first E.P.”

Her new single and first music video, shot and directed by Ron Underwood (9Electric), are due out soon.

As Darling took to the stage, the lights were dim and the mood was set for a mellow jam session. Darling has a soothing style and mesmerizing voice that will soothe the soul. She mixes great covers with heart-wrenching and essence-filling originals. It was a pleasure to jam to and a perfect set-up for a night of head banging.

Next on the stage was Springfield’s own B.I.V, or Born in Violence. Quickly becoming a staple of the hard rock and metal music scene in Springfield, B.I.V is made up of Baden Page on vocals/guitar, Justin Flood on guitar, Sarah Cornell on keyboards/synths, Dru Rohlman on drums and Nile Bear on bass.

B.I.V has been honing its sound for some time now and it shows. The band offered a highly energetic set with tracks “She,” “Liberated” and a killer cover of Killswitch Engage’s “End Of Heartache.” It’s always an audience favorite and was highlighted with a quick appearance from Mixi, of SUH, and her scream of perfection.

A fun part of the set was the appearance of the “keytar,” which gives the usually hidden Cornell the chance to come stage front and head bang with the boys. B.I.V has teased fans of new music and with an audience-pleasing performance they are making new fans with every note played.

Before the headliner took to the stage CMN chatted with Mixi and Decker. They talked about the new music fans have been looking forward to since their album “Never Alone.”

Trying to stick to what brought fans to the family while at the same time bringing something new, producer Matt Good helped bring a new feel for the band. Mixi said they had 70 tracks ready for the album to pick from. Mixi said the new album will be called “Darkness” and will be themed by the crow as a contradictory image to the dove of  “Never Alone.”

The newest track is “Lost” and Mixi and Decker talked about the accompaniment of Sully from Godsmack and what his influence brought to the track.

“We were really confident in the song even before we got him and he added such a great element,” Decker explained. “That’s what we tried to do was keep enough of the old but push forward into a new direction.”

Decker and Mixi also hinted about a music video for “Lost.”

They spoke of Blabbermouth’s coverage of “Lost” and how they loved the track but fans were more about her boobs in the promo picture.

“I don’t even have boobs and thought it was so funny,” she said.

Mixi offered some insight on the clarity her sobriety has given her and the ability to look inside of herself on this album in hopes to really reach people.

“I just wanna connect with people,” she said as she explained her wishes when she sat down to write the album.

Stitched Up Heart includes Mixi on vocals, Decker on drums, Merritt on guitar, and Randy on bass. They have a following of devoted fans who have waited for a live show for some time and they did not disappoint. While still an upcoming band, and short of the bells and whistles, the energy is set for the arena shows coming down the road as they are explosive on any size  stage.

Music played to perfection is an understatement as they had a hit-filled set list including oldies like “Catch Me When I Fall,” ” Finally Free,” “City of Angels” and “Monster.”

Seeming to have a new life spirit and energy to match, Mixi poured her heart and soul into her performance as she made the effort to connect with as many fans as possible. Head banging like a seasoned pro and leaving her heart and soul on the stage was clearly her plan, and it worked. The new life showed in new tracks fans loved including the new single “Lost,” the new title track “Darkness” and the funky new track and encore “Crooked Halo;” all were well received by the fans.

A special moment was the duet of “Lost” with Baden Page and Cody Carlton sitting in for Sully, and it was epic. Mixi can scream like the demons from beyond and sing like the angels above and has a heart of gold and unmatched talent. Backed by a special group of awesome musicians that bring the spirit of the music to life was a pure pleasure.

Stitched Up Heart didn’t need a warm up as it felt as if they hadn’t missed a beat since the last time we rocked their rail. They are one of the most passion filled and talented groups rocking the circuit now. Their tour continues through next month with off dates and the huge Godsmack and Volbeat arena tour. Stitched Up Heart has given fans plenty of opportunities to catch their live show this summer  and just added more dates with Kaleido to make sure you catch them on the way to becoming rock gods.

Follow Stitched Up Heart on Facebook here. Listen to our interviews with Darling and with Mixi and Decker below via SoundCloud.