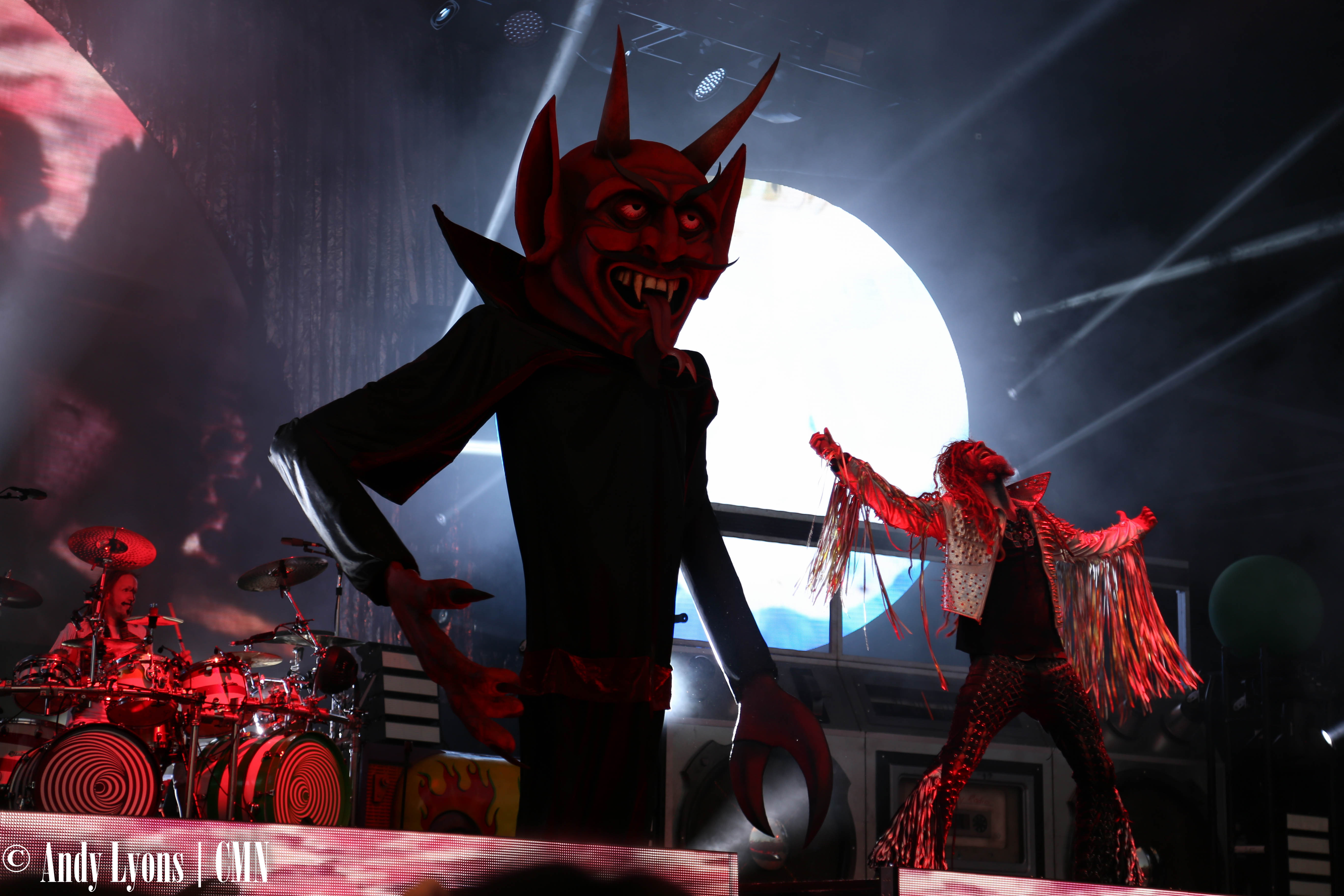 Korn, Zombie rock KC with Return of the Dreads

Thousands decended upon Providence Medical Amphitheater in Bonner Springs, Kan. Wednesday for the Return of the Dreads tour featuring In This Moment, Korn and Rob Zombie. Temperatures reached nearly 110 degrees as fans filled up the parking lot and waited to be unleashed onto the concrete stage front.

The show went pedal-to-the-metal from start to finish as three metal heavyweights hit the stage and never looked back. In between sets, CMN had a chance to catch up with legendary concert photographer Rob Fenn. He had been on the road with Zombie for the tour and left after the KC show to hit the road with Billy Bob Thornton’s band, The Boxmasters, who recently signed with Fenn’s record label. Fenn took a moment to dish on the tour, a special fundraiser he’s working on, and his upcoming film project “You, Me and a ’63.”

“The show on this one has been amazing,” Fenn said. “We’ve got the video walls, and a couple extra songs added. You can even hear one or two White Zombie songs getting thrown in there. The show is amazing, it’s really stepped up and high energy. Whenever we tour with Korn they’re like family. It’s a great tour.”

The tour was in St. Louis Tuesday night, and by Wednesday Fenn had enough of the area’s humidity.

“It’s hot as fuck, ya’ll need to move somewhere else,” Fenn said. “I swear to God, nice people, love the area but hot as fuck.”

Earlier this year, Fenn announced he was working on a movie with some big names in both film and music involved. The project has been in the works for several months, but he gave some details about when fans can expect a finished product.

“What brought that together – everybody you gotta sit down for this one – is me just trying to get laid,” Fenn joked. “All’s I wanted was a hot chick in my car, and God bless her cuz she’s so beautiful. And it turned into (the film). Realistically I joke about it, but it was just gonna be a photo shoot down Route 66 and all this kind of stuff. And it morphed into this whole thing – it’s a theatrical full mega-screen movie with me, Billy Bob Thornton and Randy Blythe (of Lamb of God) writing it.

“So you’ve got three rednecks writing a movie, and it stars me, my car and my dog that goes on this crazy ass adventure that has a ton of A-list celebrities in it, which is ironic to me. But Billy is such an amazing actor, he’s won an Oscar or something like that a couple of times.

“It’s great, because the project started out as a passion project, and it just evolved into this thing and I can’t wait for the world to see it. We’re currently have done 6.000 miles down Route 66, we about died a couple times on it. It was great. We wrote the script, we’ve got everything, all the test shots are done. We start major filming in September. I’m told it’ll be out in 2017 early, but it all depends on box office bullshit. I’m all new to the movie world, and I’m loving it, I’m having the time of my life.

“It’s mine, I’ve got total creative control. I’m working with Billy and Randy and it’s just, it’s one of those things that I can’t believe I get to do it. But I can’t wait for everyone to see it, cuz we have something really fuckin’ special with it. It turned into this whole crazy thing. Everything I love about life is in this and it’s a great story. It’s all fictional… most of it.”

The show itself was one for the ages. All three bands bring an energy-packed, visceral show. In This Moment got the theatrics started. Their live set features several costume changes from lead singer Maria Brink. The group recently replaced their drummer with newcomer Kent Diimmel of 3 By Design. He held his own, with rhythm support from bassist Travis Johnson. There was an interesting element to the set between guitarists Chris Howorth and Randy Weitzel almost dueling between songs while Brink changed costumes. The crowd responded to the band with a roaring applause, getting well lubricated for what was to come.

Zombie hit the stage next, and there was a lot at stake. It was a bit off-putting for the photographers and journalists who attended. The group of 15 or so headed into the photo pit only to be immediately told to shoot from the general admission area. After the first song, Zombie’s tour manager decided the photographers weren’t allowed to shoot the typical three songs – because it was daylight.

Despite the odd circumstances, Zombie’s set was amazing. After what many Kansas City fans consider a lackluster performance at Rockfest 2015, it was up to Zombie & Co. to really bring it. Early in his set, Zombie made it a point to call out the crowd, saying “this is the smallest crowd of the tour… what, do you not like me here?” The crowd definitely appreciated Zombie’s show, which features all sorts of creatures parading across the stage, laser lights, jumps into the crowd, and interaction.

New to the setlist was a cover of Tone Loc’s hit song “Wild Thing,” and the crowd was loudest during his set when Zombie walked through the crowd with a search light while guitarist John 5 played a solo. If any ill-will from Rockfest remained with the fans in attendance, they had definitely forgotten it by the end of the show.

Korn closed the night out and brought the house down. Over the past 15 years of seeing Korn, their recent shows dwarf the Korn of old, the band’s sobriety and the return of guitarist Brian “Head” Welch changing the dynamic of their performance. The group looks like they’re having fun on stage – and it translates to the crowd. Seeing Head and guitarist James “Munky” Shaffer playing together live is a sight to behold. It’s as if they share a brain sonically and play so complimentary together like a brutal guitar-wielding hydra.

The band played new single “Rotting in Vain” off their upcoming album “The Serenity of Suffering” due out in October. The crowd was the loudest the entire night when the band blasted them with their first single “Blind.” What Zombie does with his theatrics, Korn does with their music. Instead of using gimmicks and a big production, Korn’s stage is rather modest but musically they deliver a crushing set every show.

The show was a welcome change for the KC area, where big metal tours tend to skip in favor of other markets. Despite the heat the crowd was insane all day, giving their biggest cheers of the show when Korn closed down the main stage with ‘90s hit “Freak on a Leash.”

Visit Rob Fenn’s website at www.robfenn.com. Full audio of our interview with Fenn is located below.