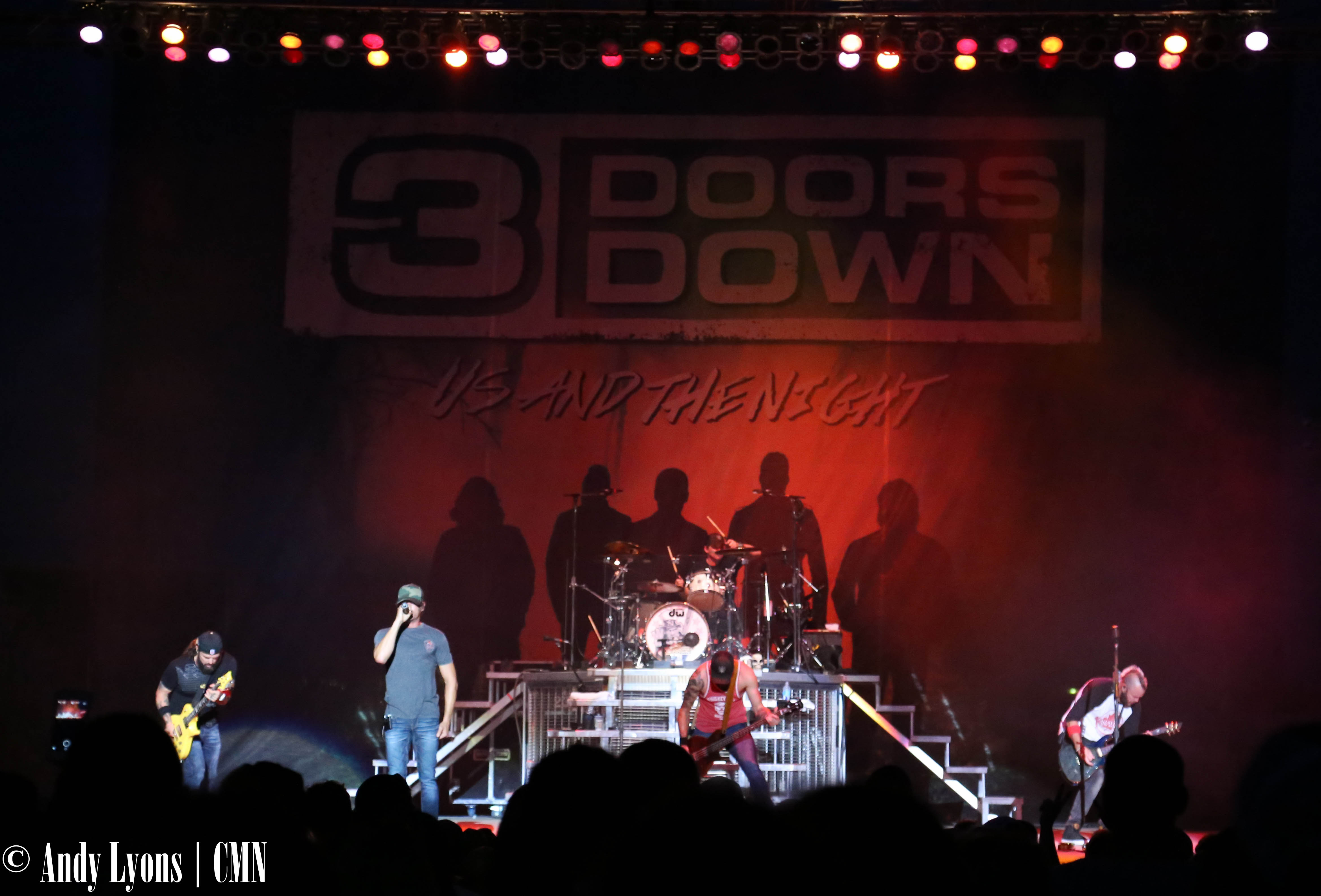 The 2016 Missouri State Fair concerts kicked off with an edge Thursday night, as rockers took the stage of the Pepsi Grandstand. Jefferson City-natives Shaman’s Harvest kicked the show off, with 3 Doors Down closing the show.

It was notably hot Thursday, with temperatures nearing 110 degrees. Fans still crowded the dirt track in front of the stage, although they did start out kind of flat. CMN caught up with Shaman’s Harvest lead vocalist Nate Hunt after their set, and he noticed the slow start as well.

“It took em a second to get up off their butts, but they did and I was happy about that,” Hunt said.

Hunt also dished on playing with 3 Doors Down, both bands got their start in 1996 and Hunt compared the two and said he enjoys playing with the group.

“It’s great, they’ve been around a long time,” Hunt said. “When we started, they started they just had a better jump than we did, right? Hell, we even covered their music a long time ago back in the dya. It’s very cool, they’re all great southern boys, they got that kinda thing going on. I love playing with them. This is, I think, our third show in the last month or so with them.”

Hunt also mentioned Shaman’s Harvest will be taking a break after pounding out a tour later this year to record a new album, the band’s last release was “Smokin’ Hearts & Broken Guns” released in 2014.

“We’re going to get off tour in October, and just quit taking tours we’ve gotta get a record done,” he said. “Right now we’re just planning on what studio and try to keep it local, keep the money going into Missouri. Take that New York money and throw it back into Missouri, you know what I mean?”

He mentioned the band is looking to record in the St. Louis area, their last album was recorded there although the studio has since gone under. He also offered tentative dates for fans to expect new content.

“I’d like to see it out by February and hit you all with a single well before then,” he said. “Like to see a single maybe January or maybe, hell, even December who knows?”

While being interviewed, a group of fans yelled for Hunt’s attention. He was appreciative of fans braving the heat for a rock show on opening night.

“It’s a huge honor for us, and I’d like to thank people coming out in this heat,” Hunt said. “This heat’s hard. Hard to go to a rock show in this kind of heat but it’s been awesome. I can’t wait to get to Missouri and keep on playing man.”

The groups set really embodied the Fair. Shaman’s Harvest’s sound is a smooth crossover of southern and classic rock. Fans could be spotted throughout the crowd wearing the group’s “Country as Fuck” T-shirts. Hunt’s voice provides duality to the group’s sound – a combination of twang and grit that would make fans of both country and rock happy. Hunt immediately started working the crowd, which was flat outside of an initial cheer when they took the stage. It didn’t take long and the crowd was on their feet and ready to rock.

3 Doors Down were really surprising to see live. While the group hit the pinnacle of their popularity nearly 15 years ago with single “Kryptonite,” their live set was really impressive. Guitarists Chet Roberts and Chris Henderson worked the crowd into a frenzy and vocalist Brad Arnold get the most raucous applause any time he mentioned Missouri or the Fair – a standard for concerts anywhere.

The most surprising part of the show was the crowd. 3 Doors Down gave a great appearance and yet the crowd seemed flat most of the night. While they were standing instead of seated on the dirt track, they were as mannequins – standing flat footed until songs ended or Arnold specifically tried to elicit a response. The heat was definitely a factor in the crowd, but 3 Doors Down earned a bigger response than they got.