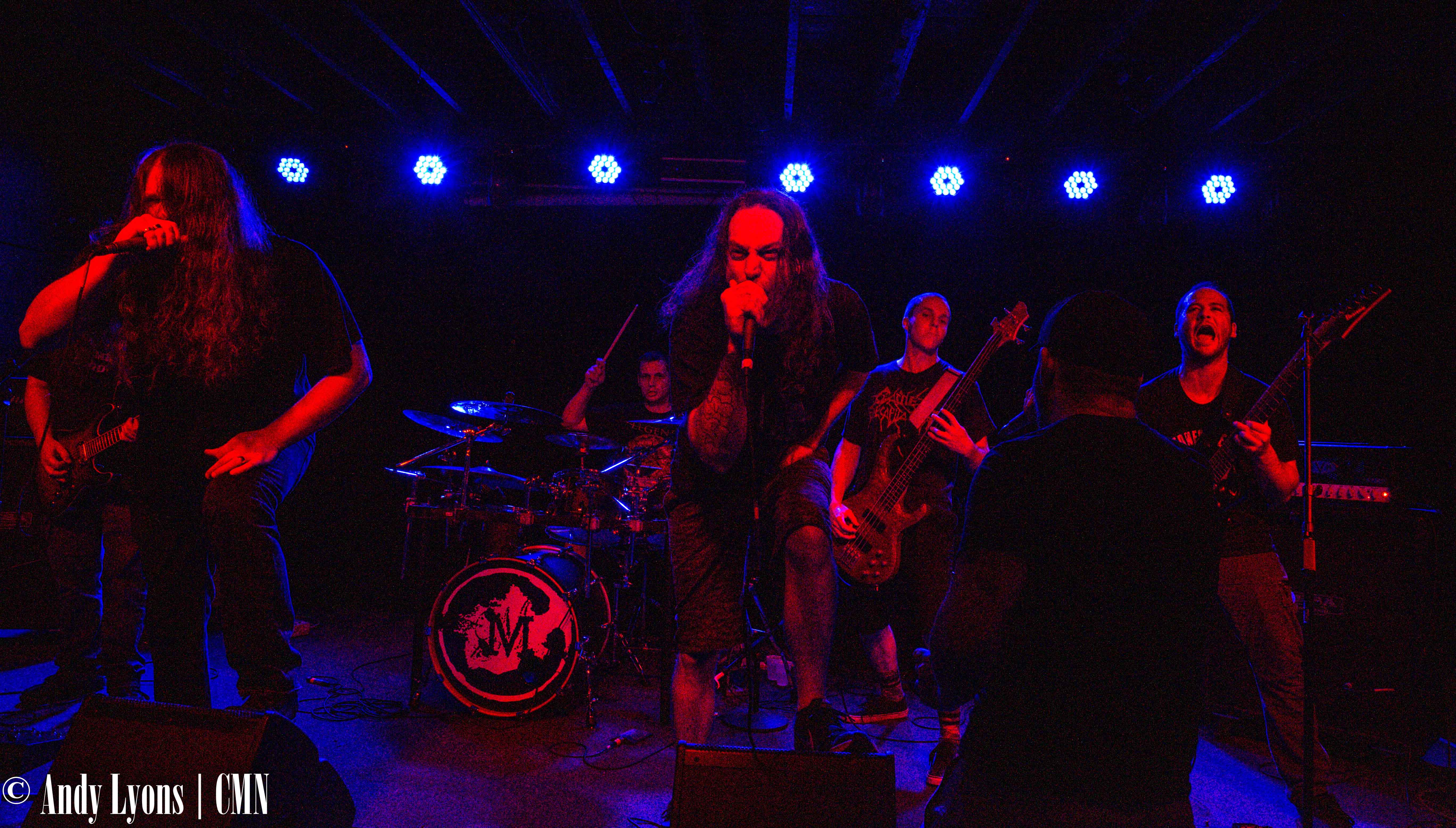 As the opening band Mercurial finished their set Saturday night, the Riot Room in Kansas City filled with cheers, hugs and tears.

Guitarist Evan McWilliams committed suicide Aug. 23, and the future of the band was up in the air. However, his band mates in Mercurial decided to continue forward with his best friend Joe Bodenhamer stepping in at rhythm guitar – even using McWilliams’ guitar and amp for the show.

The night was full of emotion, as vocalist William Gleason gave tribute to McWilliams from the stage to a cheering crowd that included McWilliams’ widow, Colene, and a throng of fans from Warrensburg, Mo. where the group is based. The emotion of the night reflected the band’s heavy decision to continue on.

“We’re gonna move forward in his honor, and pay respect to him,” vocalist William Gleason said after the set. “That’s what he would want for sure. Music is kinda like therapy for most of us I think. We just try to put our heart into it. We like being in the room together, it’s a brotherhood. Playing together builds that brotherhood.”

“Like anyone would expect, when we first found out we lost Evan we were all unsure whether we were going to continue or not,” added drummer Sean Rehmer. “Obviously you’re too hurt at the moment to make any weird decisions but we knew pretty quickly that if we were to continue that Joe was the man, and if Joe was in we were in.”

Bodenhamer had been tapped to replace bassist Harrison Bron, and McWilliams recorded videos of himself playing through five songs so Bodenhamer could learn the new parts. When the decision was made to continue on, Bron came back to the band and Bodenhamer used those videos. After one practice as a band, Mercurial took the stage again.

For Bodenhamer, joining the band is a way to honor McWilliams.

“It means the world to me,” Bodenhamer said of joining Mercurial. “This band was his passion in life, and very few guitarists in this area would take on the task of learning such obscure and difficult songs. Early in our friendship, I was very much a mentor to him in extreme metal guitar. He was a good player when I met him, but I brought him to the ‘dark side’ of metal and taught him the speed and technique it takes to play extreme metal.

“It was only a matter of months before I could say he became a better player than I,” he continued. “He was amazingly talented. I knew it would probably mean the end for Mercurial if I didn’t step up to the plate, I knew he wanted the band to carry on without him, and I know without a doubt he’d want me to be the guy to do it. To say I’m honored to be the one to carry on his legacy is a large understatement.” 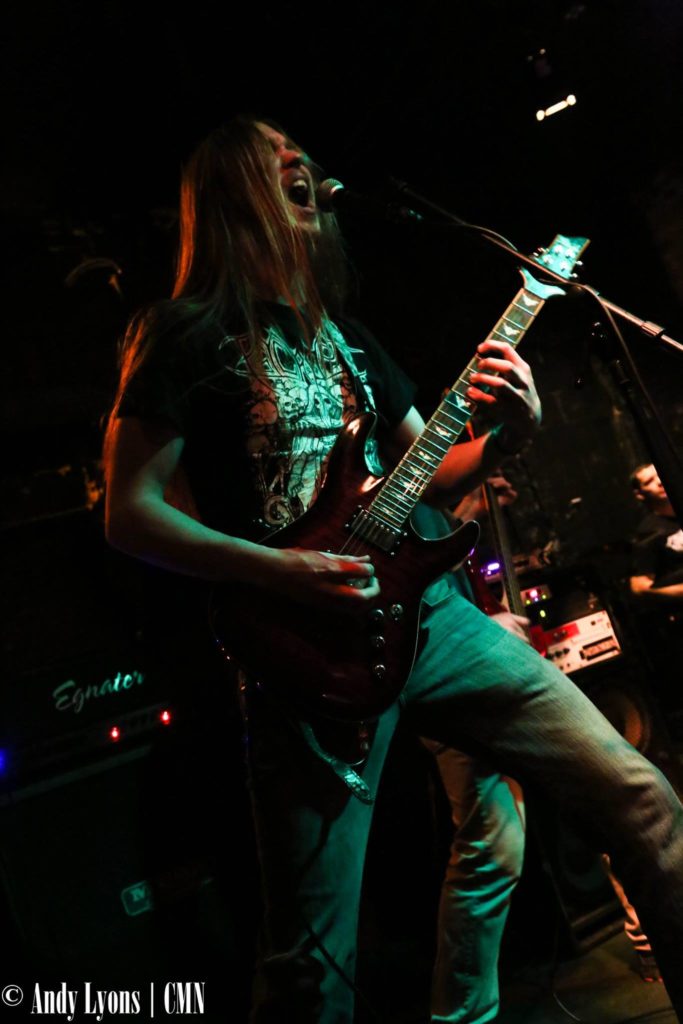 The show became a lot more under the surface, as the band, fans and family all came together for the show as a way to honor and remember McWilliams. Bodenhamer described the emotional rollercoaster that was a typical Saturday night in Westport, and so much more for those inside the Riot Room.

“One member said if he closed his eyes, it felt like Evan was on stage with him again,” Bodenhamer said. “That broke my heart, and gave me an extremely warm and loving feeling all at once. I was using his guitar and amp as well. All in all it felt great knowing that because of me, the band didn’t even have to take a break. We just picked right up where they left off. Seeing Colene out there smiling and taking pictures while we played was one of the greatest things I’ve ever felt.”

Even with Bodenhamer stepping in, the group will have to work to gain the familiarity they had with McWilliams.

“I know we’ll have to go through the motions a few times,” lead guitarist Laramie Drenon said. “I think we did well tonight and I think we’re gonna continue to do good. There’s a lot of pain there, I mean Evan’s usually right there and we’re talking to him, hanging out, having fun. And he’s not there now. But he wanted us to press on and we’re going to. Joe’s the best person to do it, worked his ass off to play tonight. I couldn’t be more proud of him.”

“There’s a very heavy presence that’s missing now,” Gleason added. “Evan lit up the room everywhere he went, he was dominant. We were right there together just crushing it every show. He’s the kind of guy who would make fun of me – if I screwed up a song or something he would call me out on it as soon as we got off the stage. It always pushed me to want to be better, he really built me up and gave me the confidence. As silly as it sounds that he was making fun of me but he was pushing me because he knew I could be better. And that was Evan, he pushed to be better all the time.”

While McWilliams was known as a kind person who was quick with a joke and could talk for hours about topics such as music and the Chiefs, he wasn’t without his struggles.

“Evan battled depression for a long time and he lost that battle,” Colene said. “Everyone that knew him knew what a happy-go-lucky guy he seemed to be, but he was struggling so much. Talking about his suicide will hopefully help those that knew him to see that even people who seem happy have struggles.”

Moving forward, Mercurial’s next show is the Topeka Metal Fest on Sept. 29. Afterward, Gleason said the group plans to hit the studio to work on a new single with more music coming in 2019. Follow Mercurial on Facebook here.

Listen to our interview with William Gleason, Sean Rehmer, and Laramie Drenon below via SoundCloud.

Editor’s Note: If you or someone you know is struggling with depression or suicidal thoughts, please seek help by contacting the Suicide Prevention Lifeline at 1-800-273-8255 or visiting www.suicidepreventionlifeline.org.