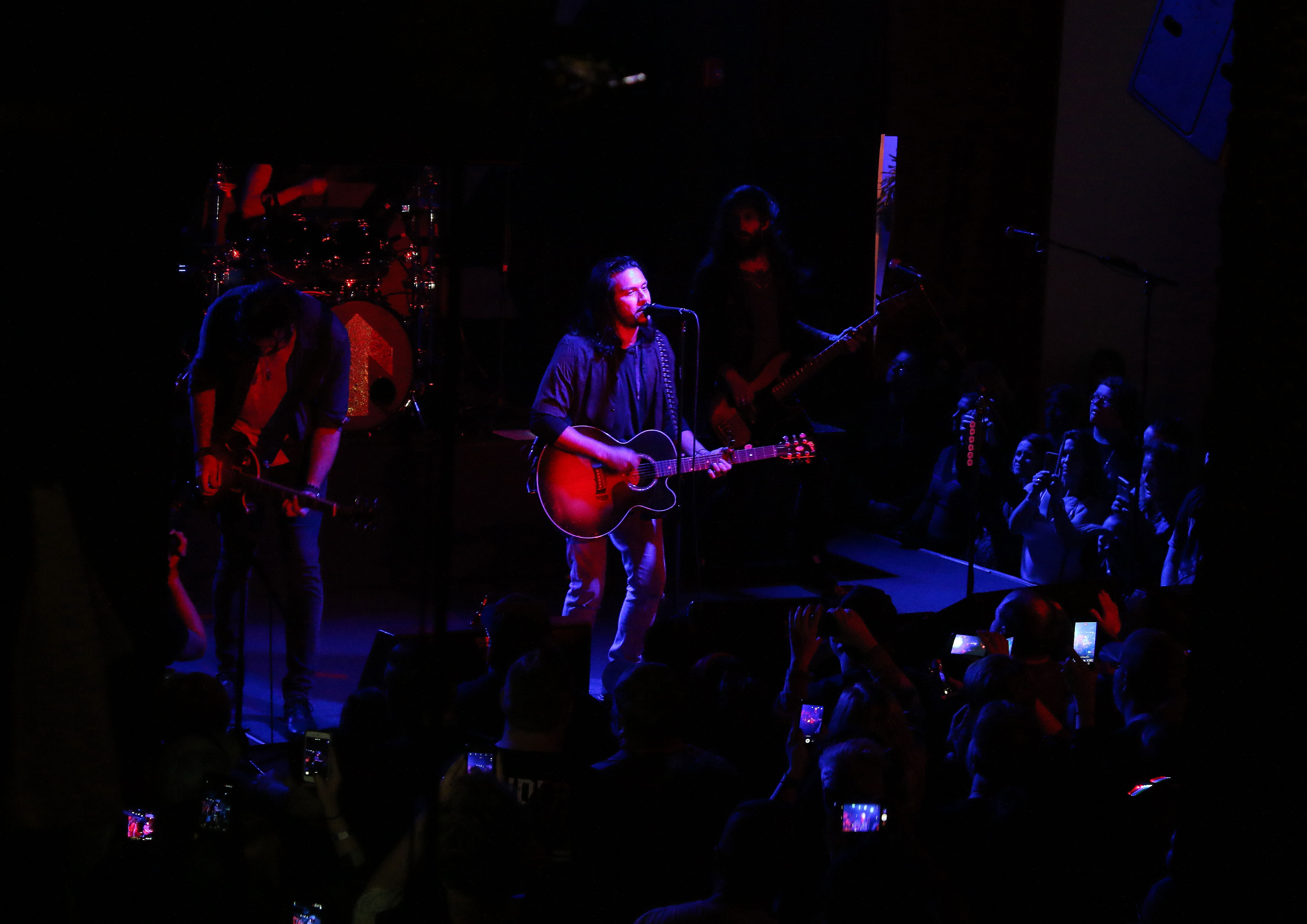 On Saturday, Nov. 25, The Regency Live! in Springfield, Mo., once again was the perfect host for an outstanding rock show that had the perfect line-up for getting the crowd pumped and keeping them there. As if the star power of the headliner Pop Evil wasn’t enough, they brought along breakout and Loudwire nominee for best new artist, Ded, the crowd-pleasing Lionize and local favorites B.I.V.

The night kicked off with B.I.V. (Born In Violence), a local metal band that has been working the local venues and making quite a name for themselves, gaining new fans with every show. Saturday night was no exception. To an already full house, Chris Stika and Justin Flood on guitars, Sarah Cornell on keyboards and synths, Lex Weiss on bass, Daniel Mottl on drums and Baden Page on vocals took the stage to excited cheers and willing fans.

Page wasted no time greeting the crowd and jumping right into “Liberated,” a fast-paced metal track. Despite the band showing some nerves in their first track, it quickly wore off as they kicked into “She,” a song that shows off the uniqueness of having a strong keyboard player. Cornell fit the bill perfectly as she helped bring out the duel shreds of Flood and Stika, and throughout the rest of a strong show.

As B.I.V. closed out their set, and thanks to the strong beats from Motti and the big bass sound of an attention-grabbing Weiss, the crowd was eager for one more track. Page informed the crowd they were bringing back a favorite and, despite technical issues, Motti had no problem leading the band into a killer cover of Killswitch Engage’s “The End Of Heartache” – a bold choice Page and the rest of B.I.V. did justice.

Next to take the stage was Lionize, a Silver Spring, Maryland, band I was not familiar with, but they quickly left a great impression. In support of their newest and fourth album, “Nuclear Soul,” the group includes Chase Lapp on drums and Henry Upton on bass, which made for a great funky-groove rock sound, Chris Brooks on keys and Nate Bergman on guitar. Lapp was in in a bright-red disco ball-sequined outfit that matched the drum kit. The group shared high-energy harmonizing vocals throughout a very well-received set.

“Lionize is a technical, jammy kind of progressive band,” Joe Cotela, of Ded, said before the show, “with big penises.”

Now I don’t know if that adds to their talent, but it couldn’t hurt. Born out of a friendship from their teens, Lionize has matured into a unique sound that draws inspiration from spectrums of classic rock and Motown. With the addition of their soul, it makes for a fun band that makes you want to dance. Their set from start to finish was nothing short of fun and passion-filled tunes from very talented musicians.

Riding high on their hit single “Anti-Everything,” Octane Radio’s song of the summer and with 1.2 million views on YouTube, and in support of their debut album “MisAnthrope,” Ded came to Springfield ready to melt faces and make new fans. I was able to sit down with lead singer Joey Cotela and drummer Matt Reinhard before the show, and a few minutes later a quick chat with guitarist David Ludlow.

The group talked about their new album and its stellar numbers on several music charts, working with Fred Durst on a music video, their upcoming tour with In This Moment, disappointment with society in general and the hunger for a hard, angry sound in popular music.

Ded blasted onto the stage to explosive cheers from the crowd and rocking what has become their trademark, white eyes, and slammed into the first
track, “Architect.” Like their album, the set is nonstop down-and-dirty, aggressive in-your-face metal, a positive message with an F.U. behind it from start to finish. With a nu-metal flavor influenced by the likes of Korn, Slipnot, and Pantera, Ded comes at you full force and wants you to feel the music.

The crowd had no trouble bouncing and headbanging as Ded went into their new single, “Remember the Enemy,” and the energy stayed at 11 as they tore through a metal set. Just as you thought the crowd couldn’t get any crazier, Cotela asked, “Do you know this one?” “Anti-EVERYTHING,” roared back the crowd, and the band went into their No. 1 Alternative new artist rock track.

Along with a great, fresh sound and a positive message behind an aggressive attitude, self-proclaimed heavy-metal hippy Cotela just wants everyone to be cooler than they are, nicer than they are. That looking-out attitude showed as he cast attention to the crowd when a slight altercation broke out: “No fighting out there be nice to each other.”

If you are a fan of heavy metal with a good beat, Ded is a must-see and they have no issue hanging at their merch booth to greet, hug and take pictures with every fan.

There isn’t a much better way to headline a show of fantastic bands than with the powerhouse band Pop Evil, fronting what appears to be a warm-up for their recently-announced War Over world tour with Palaye Royal and Black Map that kicks off Feb. 14, just two days before the release of the new self-titled album.

Fresh with a new track off the highly-anticipated album, Pop Evil released a video and single, “Waking Lions,” to very good reviews. When vocalist Leigh Kakaty, guitarists Davey Grahs and Nick Fueling and bassist Matt Derito followed their newest member, drummer Hayley Cramer, onto the stage, the fans could no longer contain their excitement. The packed house exploded in cheers and horns as Cramer led them into a classic track, “Deal with the Devil,” to kick off the set.

Derito and Cramer are one of the most fun teams in rock. You can feel the bond between the two as they rock through hits such as “100 in a 55,” “Hero,” “Boss’ Daughter” and “Trenches.” Grahs and Fueling are great guitar players and meld well together and are as fun to watch as they are to listen to.

Even though “Waking Lions” is brand new, fans had no problem singing along with Kakaty’s passion as he broke into their new hit. Pop Evil draws every bit of energy they can from the crowd and give it back tenfold.

Their music and show are very positive and uplifting, a good beginning-to-end, happy rock-and-roll show. Pop Evil makde sure to hit all the fan-favorites like “Ways to get High,” “Monster You Made” and “Footsteps.” Closing out the show after introductions, Kakaty led the closer, “Take It All,” a great singalong song and fantastic way to end the show.

Pop Evil, Ded, and Lionize are on tour through Dec. 2. Each on their own is great, but together the show is a can’t-miss. Check out our interview with Joey Cotela and Matt Reinhard of DED below: