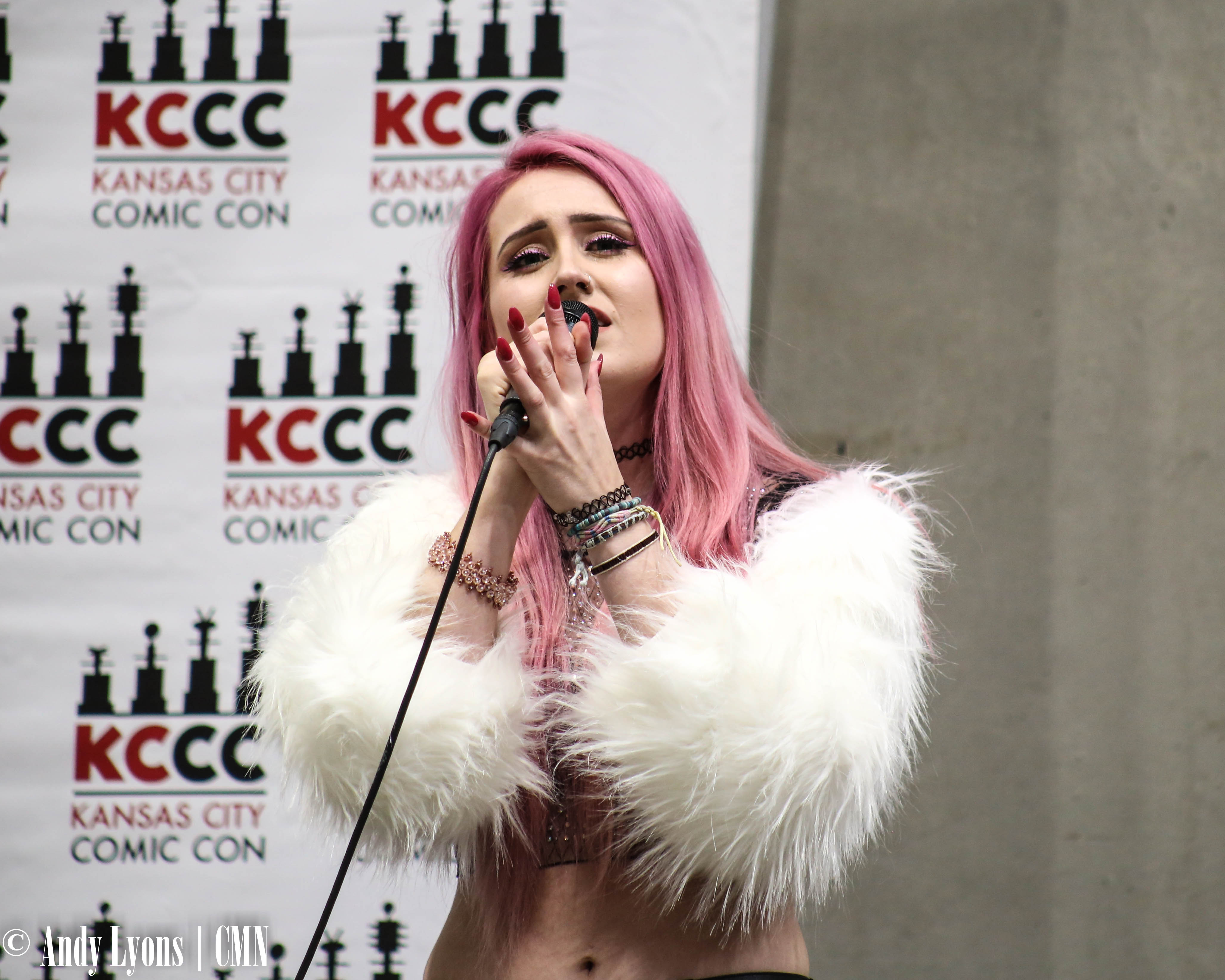 Anything can happen at Kansas City Comic Con, proved this year with Kevin Smith popping in on a panel and entertainment provided by KCXW Wrestling, a break from stereotypical Comic Con events. Kansas City pop artist Crystal Clayton fit right in, performing on the Live Stage Saturday night at KCCC.

The performance was a first for her, but she was no stranger to KCCC having been prior as a spectator. Her outfit and performance fit the venue, her pink hair and feathered jacket blended well in the sea of cosplayers at Bartle Hall.

Clayton has been making a name for herself in the KC metro, performing at venues such as Riot Room and recordBar as well as taking to the streets and playing in Artist Alley near Grinders during a recent First Friday event. Clayton released a new EP last month titled “Too Human” and played it in its entirety for the crowd at KCCC.

Speaking to Clayton before her performance, she told CMN what goes into creating her music.

“For one of the songs I released, ‘Blinding Light’ which is the first single off of the EP… I released it back in April and for that song I wrote it a little differently,” she said. “Because my producer had a track that he sent to me, and I listened to it and I loved it and I immediately started being able to sing the song and just started writing it out.”

She said for most of her writing, she comes up with a tune in her head and gets to work writing lyrics and playing along with it on her guitar. For
“Too Human,” she worked with Denver-based producer Spencer Hoad. The two would send snippets of ideas back and forth and then Clayton said she would drive to Denver to record with Hoad, which she said worked well.

Clayton said becoming a pop singer has been a lifelong goal.

“I’ve known since I was a little kid that I wanted to sing,” she said. “I would tell my mom every day when I was like three and four years old that I was gonna be just like Celine Dion because I loved Celine Dion so much. So, growing up I always just knew that I was going to be a singer. And then, I did train vocally, classically, when I was seven I started doing that. So I’ve done pretty much every genre of music that you could think of and started writing as a teenager.”

Her other influences include pop legends Mariah Carey and Beyonce Knowles as well as powerhouse vocalists such as Lady Gaga and Rihanna, and she loves to listen to more artsy performers such as Billie Eilish and Sabrina Claudio. Her love of across different genres really helped her find her voice.

“For my vocals, honestly I like to show off,” she said with a laugh. “I love to do runs, and belt and do weird funky stuff. I think a lot of that comes from the R&B and pop I grew up listening to.”

Clayton has performed at venues across the Kansas City metro including Riot Room and recordBar, as well as an impromptu performance in Artist Alley near Grinders during a recent First Friday. Clayton is performing live with fellow Kansas City pop group Olivia Fox at Knuckleheads on Dec. 7 and has Christmas shows planned throughout the holiday season.

For more, follow Crystal Clayton on Facebook here. Listen to her EP, “Too Human,” via Spotify below.