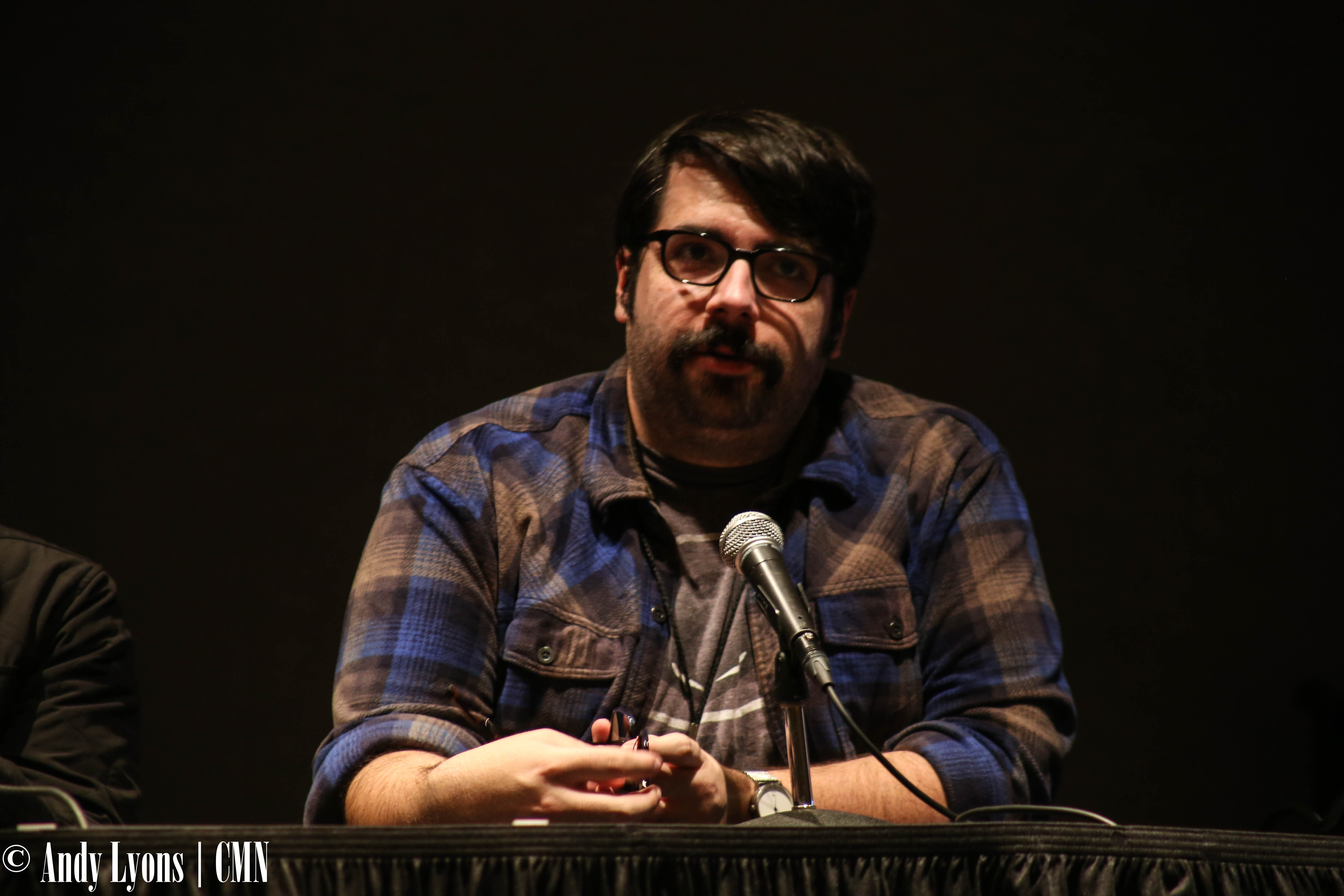 Batman has been one of the main faces for DC Comics for more than 75 years. Throughout his long reign over Gotham City, he has trained several sidekicks to help maintain what seems to be the gloomiest city in all of comics. After serving their time as Robin, the various sidekicks have moved on to having their own superhero identity. Everyone has their favorite iteration of Robin and many will continue to read the stories brought about by the character going solo, but it’s also important to pay attention to the stories told when these characters are still part of the Batman Family.

“Detective Comics” is a series that follows the exploits of the Bat Family. Even with Batman making an appearance in the comic, the true greatness comes from the interactions the Bat family has with one another. Kansas City Comic Con hosted the writer of “Detective Comics,” James Tynion IV, and CMN got the chance to talk to him about his experience at DC Comics as well as his other works.

When people think of Batman stories, Scott Snyder and Greg Capullo will come to mind. While these two creators are fantastic, it is also the supporting roles that really help drive home a great story. Tynion worked on “Batman Eternal” and “Batman and Robin Eternal” with Snyder, and both series were met with overall positive reviews.

Tynion even worked with the Caped Crusader’s run-in with the Heroes in a Half Shell in “Batman/Teenage Mutant Ninja Turtles,” a six-issue series that did so well a sequel series is expected to be released later this year.

Tynion’s favorite Batman story he has written has evolved over time.

“For a long time, the story I would always point to was a backup story I did for ‘Batman #0’ that was each of the Robins and Batgirl seeing the Bat Signal in the sky the first time it ever went up, and it’s before any of them became Robin,” he said. “So that story was one I was really proud of for a really long time, but honestly through ‘Detective Comics’ it has allowed me to use the entire Bat Family and it lets me play with them and tell these huge stories, so now I would say that the entire run of ‘Detective Comics’ is what I am most proud of writing.”

“The character Tim Drake was the Robin when I was growing up,” Tynion said. “He became Robin right around when I was born and he was Robin for all of the time I was growing up. I would read every issue of ‘Young Justice,’ every issue of ‘Robin,’ and Geoff John’s ‘Teen Titans’ and those things coalesced him into the character that I connected to most and he was kind of my lens through which I viewed the entire DC Universe. That’s the reason why he’s so dang important to my “Detective Comics” run. It’s really just me being like ‘No, no, no, I love this guy and you guys should also love this guy’ and it’s been an absolute blast.”

“Detective Comics” isn’t the only series where Tynion has featured the Bat Family. He was part of a team comprised of himself, Scott Snyder, Greg Capullo, Gail Simone, Scott Lobdell, Peter Tomasi, and many others who all worked on the 23-issue series “Death of the Family.”

CMN asked him to talk about the series and any influence Jim Starlin’s 1988 series “Death in the Family” had on the new story they created.

“There’s definitely the mirror of the title, but the big thing there is that ‘Death in the Family’ was the first time the Joker really came at Batman through his loved ones,” Tynion said. “That was the story that really defined the core part of their relationship. The kind of jealousy, fear and anger that he has to the people who are kind of disciples of Batman himself and he might have previously tied up Robin and put him over a pit of boiling acid, but that was about it, but this was something else. We wanted to do a really deep, dark emotional Joker story and Scott (Snyder) and Greg did such an incredible job on the main story and I was really happy I was able to work with Jock (Mark Simpson) on those backups where we got Joker head-to-head with one of Batman’s core adversaries.

“The relationships between the villains is sometimes the least explored aspect in comics and it was a thrill getting to see how Joker talks to the Penguin when no one is around, or to the Riddler, and Two-Face,” he continued. “Two-Face was my favorite because Joker thinks Two-Face is a fake and resents him because even though Two-Face is this inverse version of what he was, he still represents order and Joker is still chaos.”

Throughout the interview, it became clear Tynion has enjoyed working with Scott Snyder and it was surprising to learn the reason why he worked so well with him.

“Scott Snyder has been a friend of mine for almost a decade,” Tynion said. “He was one of my professors in college and that was how I met him, and this was before he had ever written a single comic book. Over the course of a year he got approached by Vertigo and Marvel to start pitching for them and he wrote out his first pitch for what would become ‘American Vampire’ and he sent it to me. Rather than being like ‘Woah man this is so cool!’ I sent him a 10-page critique breaking down every single thing I didn’t think worked in that.

“Ever since then, he has sent me everything he’s worked on,” he said. “I eventually became his writing assistant and then Scott Snyder became Scott Snyder and his New 52 Batman series was so successful that DC called him and asked to have eight extra pages per issue and he was already writing a million things, so he called me up and asked if I wanted to write some Batman comics. It’s been a long relationship and at this point it’s become more of a partnership, and it’s really been a special experience. He’s an incredibly kind person and a genius writer and the fact that I get to pick his brain and stay up late at night talking about Batman and the entire DC Universe is pretty damn cool.”

Working on DC’s “Dark Nights: Metal,” Tynion has been at the forefront of one of the most exciting stories currently out.

“This is a story that touches everything, not only in our universe or even the multiverse, but the entire DC cosmos and the ramifications that will come out of the end of the series and what it will set up will be really frightening and cool,” he said of what readers can expect from the second half of the series. “And I’m really excited about what follows.”

It’s easy to get wrapped up into Batman and all the villains and heroes that go into every story, but Tynion’s work isn’t limited to just the Dark Knight.

“I’ve been doing a lot of work through Boom! Studios,” Tynion said. “I had a series that ran for about three years called ‘The Woods’ that was about a high school transported to the middle of an alien forest and about all the kids trying to figure out how to survive and get home. That was really my touchstone for a long time, but that series just wrapped up last month.”

 “Memetic,” which is about an image posted online that ends the world in three days.
 “Cognetic,” which is about a psychic who walks into the Empire State Building and starts taking over people’s minds, spreading like a virus over the entire city and then the world.
 “Eugenic,” which Tynion said is the strangest of them all. It is in stores now, with two of the three available.

“It is one of the darkest stories I have ever told, and every issue takes place 200 years after the previous issue,” Tynion said of “Eugenic.” “It’s real strange sci-fi that gets dark in places, and even though I enjoy playing in the DC toy box, I like to play in my own and I’m sure there will be more independent stories from me over the course of my career.”

We definitely hope that there will be a lot more from Tynion and his consistent work is only going to draw more people to whatever it is that he works on. He is a great writer and a humble person who truly enjoys everything that he does, and it shows on the stories that he has created. Be sure to check out all his amazing work and, if you aren’t already, be sure to follow him on Twitter.