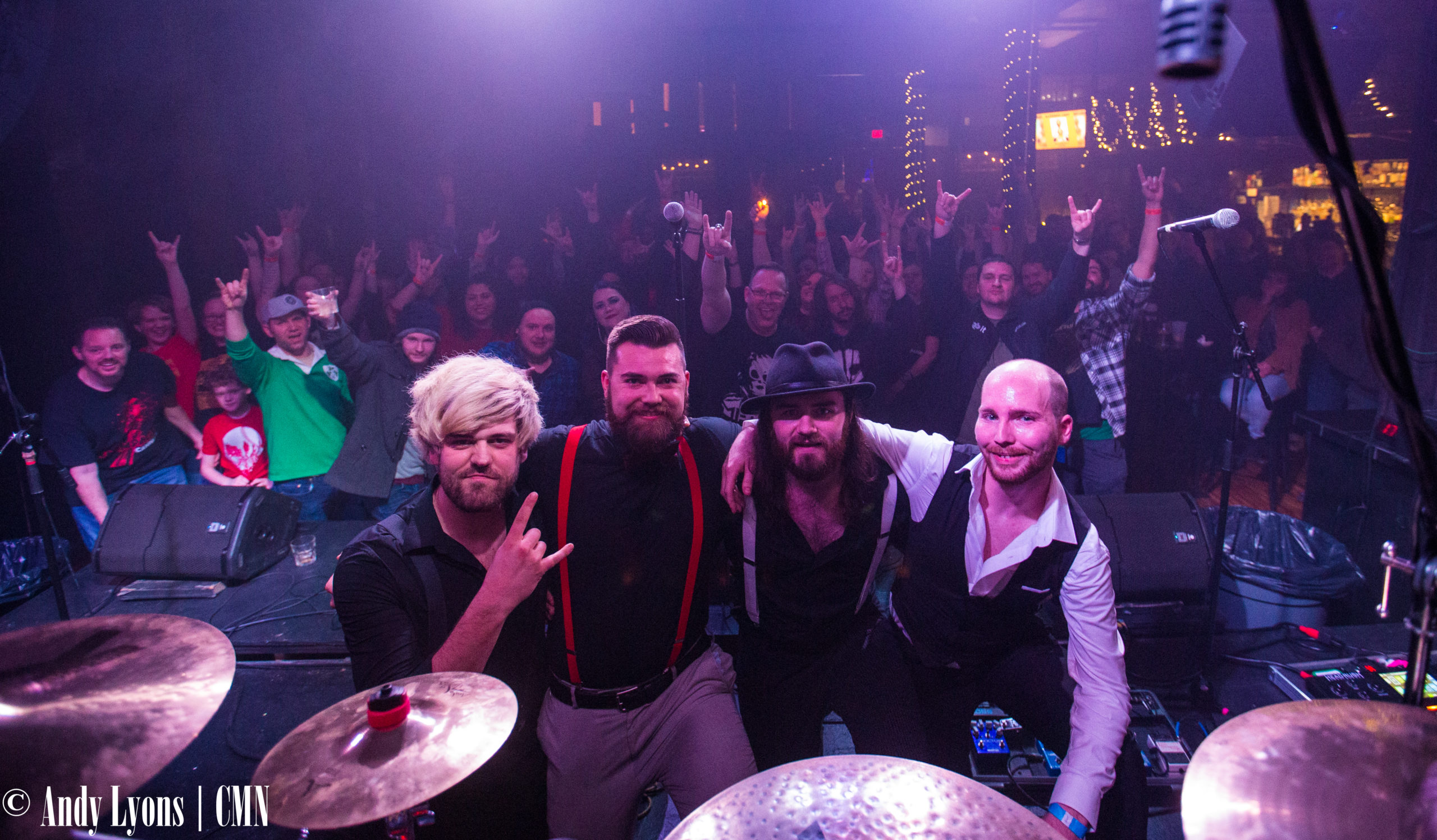 The Champagne has had a busy 2019, wrapped up with their second annual Fake New Year’s show at recordBar Friday night. The group had up-and-comers Quite Frankly and Duncan Burnett to get the crowd ready for a nearly hour-long set.

The Champagne brought their A game for the show, including two never-before-heard tracks and a couple of surprise tracks that included Quite Frankly’s 15-year-old guitarist, Nate Gregory, on stage for Aerosmith’s “What It Takes” and a rock version of Beastie Boys’ hit “Fight For Your Right.”

With New Year’s taking place on Wednesday this week, a Friday night show was the perfect way to ring in 2020 surrounded by friends and family. The Champagne’s crowd had people of all ages, including a few children who were at stage front.

Before the show, Lynch and bassist Drew Keffer sat down with CMN to talk about all the changes the band has gone through in 2019, including putting Friday’s show together. Lynch got turned on to Quite Frankly through his guitar teacher, who also teaches Gregory. Lynch said he caught Quite Frankly performing at Aftershock and wanted them in the show.

During their album release party at the VooDoo Lounge earlier this year, The Champagne had Maddi B of Minor Rewind join them on stage for a cover of Aerosmith’s “Cryin.” For Fake New Years, Gregory joined the group on guitar for “What It Takes.” Lynch admitted he’s had Aerosmith on his mind for a lot of 2019.

“I’m on a huge Aerosmith kick,” Lynch said. “I have been now for like a year, I can’t get them out of my head. I saw them in Las Vegas, I went into that show knowing that I was gonna get my mind blown but being there was way more than I could have ever expected. Steven Tyler is 72 years old and that dude rocks harder than anybody in the entire world, I’m dead serious.”

“Speakeasy” was packaged and ready before the group rebranded. The group is working “Fantasy” into radio play. The album was finished and the group began working with Eric Baker, who suggested the name change and has helped the band with direction.

“That name did not go easy,” Lynch said. “We really, really liked Champagne Campaign a lot, we built a lot behind it. The goal though, is it’s going to be very, very similar with The Champagne. It’s the same branding, we’re still wearing the same uniforms, the same music, just a different name.”

The group is toying with the idea of releasing an EP with some of the music from “Speakeasy” as they sell through the 300 or so copies they have of “Speakeasy” and possibly releasing a version of the album later with some new material. Through 2020, the band will be playing covers to try and pick up some momentum and make some money while working bigger shows as opportunities present themselves.

“Our goal would be to jump on some bigger shows this year like Pop Evil and Jonathan Davis from last year,” Lynch said. “Get some more of those, and keep moving in the right direction with that and then one or two more headline shows like this.”

Looking to 2020, Keffer said they would like to play with groups such as Alter Bridge, or Pop Evil again if the opportunity is there.

“Dirty Honey are awesome,” Lynch said. “They’ve got that classic rock ‘n roll sound so I’d like to get on a show with them… Bands like that, that are kind of in the rock ‘n roll vein and are still kind of on the come up, would be the goal this year. Especially the Glorious Sons, Dirty Honey, those guys are bands that have broken essentially now, but they’re not so big they’re out of the realm of possibility.”

Openers Quite Frankly brought the energy early, going on just after 7 p.m. The group’s age ranges from 15 to 18, but they own the stage like seasoned vets. Vocalists Carolyn Armstrong and Jolson Robert split duties and give a wide range to the band. Robert also adds a shot of energy behind the axe with a performance that had him on his back center stage while he and Gregory went into a full blown jam.

While some would consider youngsters on stage novel, the group’s presence had the early crowd on their feet and singing along through a setlist that included covers and originals, both with a unique sound Kansas City will come to enjoy.

Burnett’s set was less organized, more of a jam session. The three-piece of bass, guitar and drums played off each other with Burnett directing the chaos. The funky set vibed well with the crowd and prompted fans to get up and make their way to the front of the stage. The group’s playing evolved from jam session to song, with Burnett’s vocals a blend of hip-hop and rock.

The Champagne came on and their fans went crazy. The room seemed smaller with scores of fans piled in front of the stage at recordBar. The group played through their set, with frontman Ryan Lynch consistently chatting up the crowd.

The crowd was rowdy and loud, helping Lynch with vocals throughout the show. A few people up front started moshing during “Can’t Stay Sober” and some shoving ensued, but Lynch stopped the band and made sure everyone was alright and chilled out. Hugs were shared and the crowd went on enjoying the night.

For more, follow The Champagne on Facebook here. View our gallery below and extended gallery via SmugMug here. Listen to our interview with Lynch and Keffer in its entirety below.