LATEST NEWS
12:06 PM
Home News A laid back Friday night at the Fair 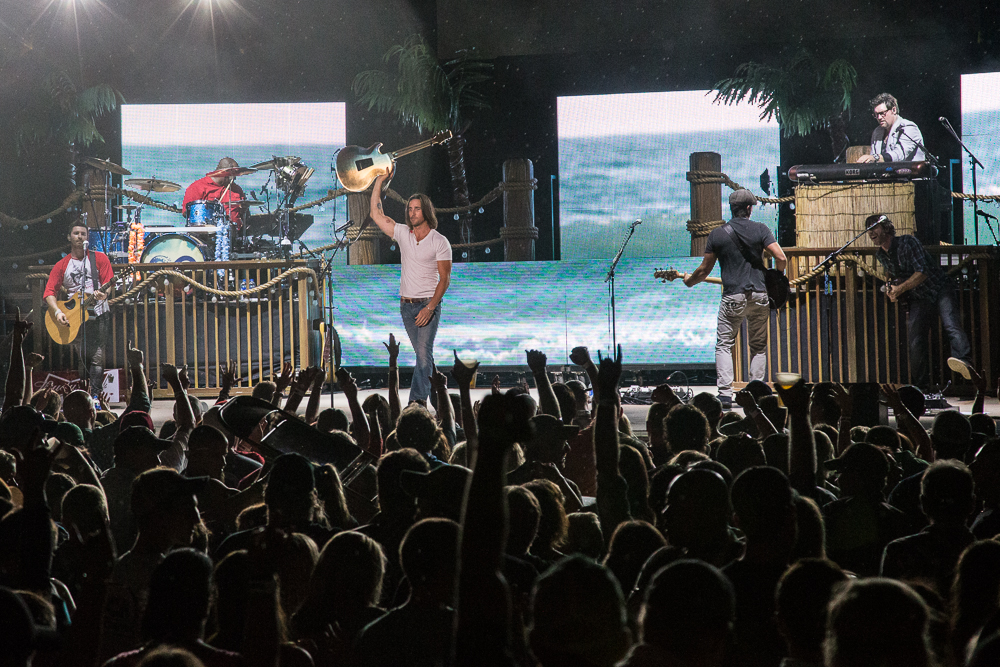 A laid back Friday night at the Fair

Fans braved cloudy skies and drizzling rain for a chance at a laid back Friday night as Jake Owen, Eli Young Band and the Cadillac Three took the stage at the Pepsi Grandstand.

The show was part of the “Days of Gold” tour, with all three groups supporting albums released last year. The sound of all three was quite a bit different from the traditional country sound heard throughout the week at the Missouri State Fair.

Cadillac Three’s set was a bit more rock heavy than expected, with the three-piece band showcasing some rock-infused electric guitar songs. The band’s first single from their latest album, “The South,” features some Florida Georgia Line, Dierks Bentley, and Mike Eli of Eli Young Band. Lead singer Jaren Johnston was talking to the crowd between songs with his Tennessee drawl, getting those in attendance primed for what would be an epic party at the Grandstand on Friday night.

When Eli Young Band hit the stage, I was surprised by their setup. They used two electric guitars, a bass guitar, and a drummer. There was no steel guitar, mandolin or fiddle – all of which I had become accustomed to throughout the fair. Before their first song was finished, fans in front of me were folding up their chairs and piling them so they’d have room to dance and enjoy themselves.

Early in their set, the Grandstand was busy with fans moving everywhere, getting to their seats and greeting their friends. I was a bit taken back by the lack of interest in the music. By midway, the band’s guitar work had everyone clapping and bobbing to the music. It was such a weird transformation, as if a single song clicked in thousands of people’s heads and grabbed their attention.

It seemed like the clouds parted and the sprinkling rain lightened a bit as the group slowed things down to play “Always the Love Songs.” Lead singer Mike Eli prompted the song by mentioning that at a honky-tonk every fourth or fifth song is a love song. The fans reacted by draping their arms around the shoulders of their friends and swaying to the slow beat of the song.

The group was very entertaining and had a good stage presence about them. Throughout their set, they would finish songs with all the guitar players in a line for a jam session, and they were all consistently flicking guitar picks into the crowd. The band could easily be considered a rock band as well as country. By the end of their time on stage the audience was singing along and beers were flowing through the crowd.

Despite not selling out, the Grandstand was packed during intermission. The lines were unbearable at the restrooms and beer vendors were tapped out before really even getting into the crowd. Oddly, rap music played over the sound system while roadies set up for Jake Owen’s set. The Grandstand turned into a dance party as people let loose and readied themselves for the final act of the night.

The crowd erupted in a noisy ovation as the lights dimmed and “Welcome to the Jungle” by Guns N Roses played. The giant curtain dropped to reveal a tropical scene with tiki bars and palm trees. The lights went black and a short intro video played, giving hint of Owen’s laid back beach lifestyle. Finally, some dubstep played as the band took the stage one by one. Almost immediately, Missouri State Highway Patrol officers, Sedalia firefighters, and ushers had to patrol the aisles ensuring people respected fire codes and stayed off their chairs.

The fans were ready for the laid back Owen, who really reminded me of Matthew McConaughey’s character in “Dazed and Confused.” He seemed like he didn’t have a care in the world and his infectious smiled sent the women in attendance into a flurry of screams.

He really interacted with the crowd. Singing to a particular couple that was sitting in the very top row of the Grandstand in a hilarious song about why the man would bring a girl to the top. Throughout his set, Owen invited members of the crowd that looked like they were having a good time up to sit at the tiki bars on stage. He gave the crowd kudos for sticking it out through the light rain to have a good time on Friday night with him. He even accepted a beer from a member of the crowd in the front row and held it up in a salute that had the majority of those in attendance doing the same.

Late in his set, the rain started to pick up a bit and Owen talked about how his career playing got started and that he wanted to do a big group sing-along. He played “Boot Scootin Boogie” and “Chattahoochee” and the crowd went nuts. Throughout his set, Owen played a couple of covers, one of “What I Got” by Sublime and later “Ice Ice Baby” by Vanilla Ice.

It was a very entertaining show. The laid back nature of all three bands was really easy to identify with. The crowd was so loud during Owen’s set that two MSHP officers had issues hearing over their walkie-talkies, so they had to begin using their flashlights to notify each other if they needed assistance. Fans were dancing and singing along in the aisles. It was clearly a good time to be had by all, although I’m sure most of us from mid-Missouri would have rather joined Owen on the beach in his native Florida for the show instead of dealing with the humidity and rain that fell Friday night.