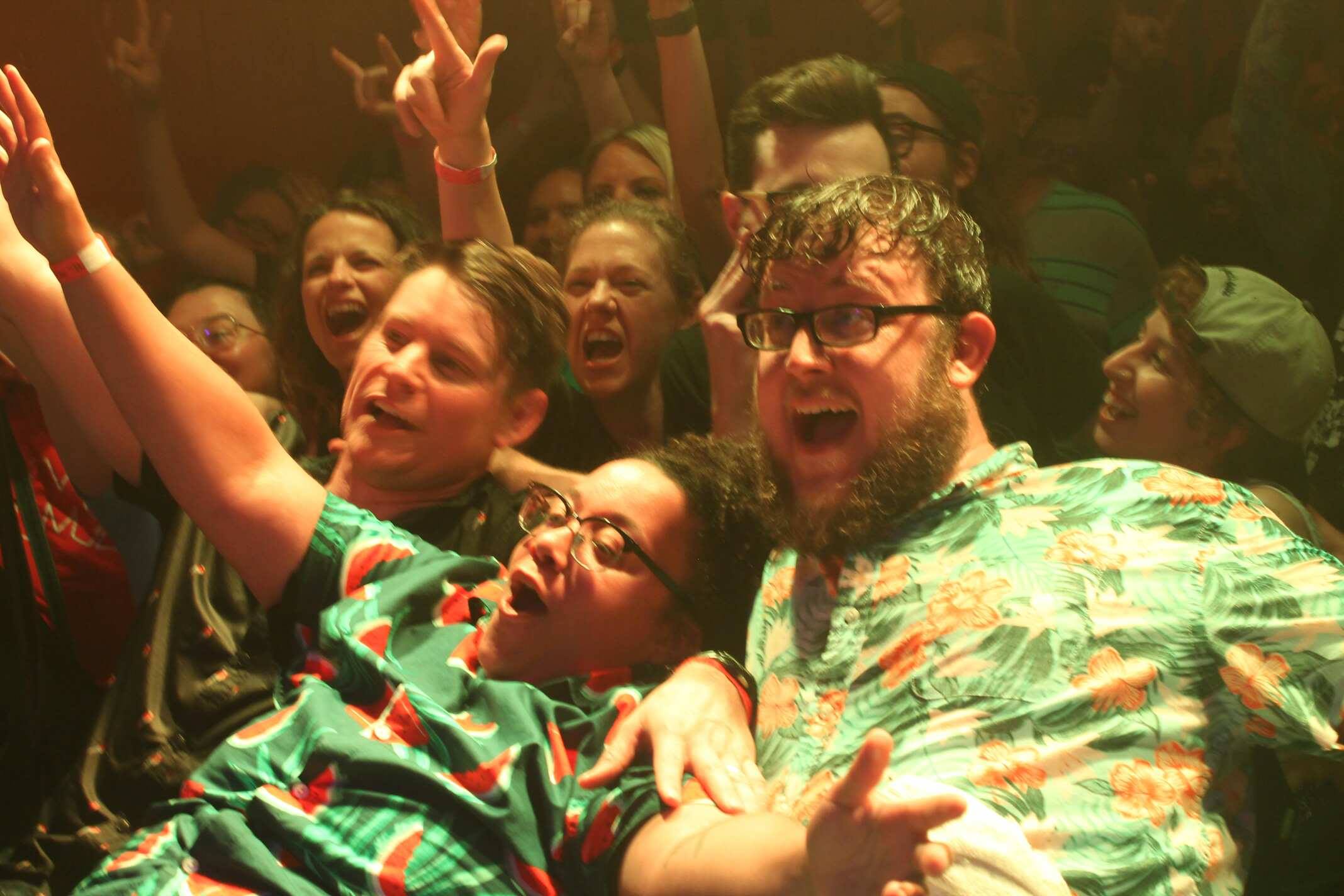 The Many Colored Death bring stellar show and new album

The chanting of “MCD, MCD, MCD!” echoed through Rose Music Hall, sounding like the roar of the bloodthirsty, ready to charge into battle.

The excitement of the occasion was not for an average or below average rock show – Friday, May 24 marked a monumental night for Mid-Missouri rock, the Columbia music scene and The Many Colored Death. It was the release party for the band’s latest disc titled “OKAYEST.”

A buzz around town and online was brewing. Initially the show was scheduled to take place at The Blue Note but was later changed to Rose, and the show at the moved location turned into a sold out, sardine can packed, show. It was a moment nine years in the making, marking the first time The Many Colored Death had sold out Rose Music Hall.

They weren’t alone in accomplishing such a feat, the bill was filled with a smorgasbord of bands including Don’t Mind Dying, Dark Below, Godzillionaire and Skooma.

After the opening bands rocked through the night, it was time for the moment fans were all waiting for. The lights were dimmed, and like a disorienting bolt out of the blue, the theme from “The Golden Girls” came piping through Rose’s sound system.

“Thank you for being a friend/Travel down the road and back again.”

The Many Colored Death is a band that doesn’t appear to take themselves too seriously…but are definitely serious about their music and bringing the rock to a gathered legion of adoring fans. The entire night was musical perfection.

The sheer, driving power of the synchronicity of their playing was a sight to behold. There was no holding back with any of this. All the members of The Many Colored Death were linked up and in time.

Their performance on stage that night was one of those moments when the sum of something is the whole of all its parts, and all the members of the band are giving their all, from the perfectly on point, thunderous drum fills from Shea Spence, Preston Rodgers’ rumbling steamroller bass playing and the razor sharp riffs of Brent Moore.

This was rock music at its most powerful, that’s right “rock,” no other categorization is needed.

The influences are there: Led Zeppelin, King’s X, Soundgarden, Coheed and Cambria, but The Many Colored Death managed to create their own unique, special blend.

It was by checking out their most recent video that I became interested. The video, released online in March, stands as a five minute tour de force of rock n’ roll awesomeness, with so much humor sprinkled throughout, a true work of genius.

We are introduced to the trio of The Many Colored Death assembled around a table, laughing it up, then all of sudden, an imposing stranger, played by Brian Craig, aka BC, the lead singer of Don’t Mind Dying, throws down a challenge, which leads to BC and Preston locking horns in a heated taco eating contest, with all the high drama and tension of the final tournament battle in” The Karate Kid,” just minus all the karate and with tacos instead.

Not quite sure how a taco eating contest relates to the song, but the visuals, in the way in which they are synched and edited together, perfectly fit.

I found the chorus of the song to be downright infectious and said lyrics would often randomly find a way into my brain throughout the day.

“All the lessons poured into me/Made a mess of my mind/Holy water went straight through me/Left me unsatisfied.”

To my delight, “The Sieve” was on “OKAYEST.” Much of the album sounds like it falls somewhere in between Puget Sound and the Sunset Strip, something so organic yet larger than life itself, transfixing grooves, intricate guitar work, heartfelt vocals.

Along with “The Sieve,” more than a few stellar standout tracks are on the album: It starts off with “Drown,” a song that hits with the impact of a collapsing house, and the lyrics convey a grim tale of self-destruction and finality.

With some of the songs on the album, The Many Colored Death display the ability to craft a story within a song, even when the lyrics are more esoteric and indirect.

Another scorcher early on the album is “Be Mine,” taking the title from those juvenile proclamations of infatuation that were embedded upon Valentine’s Day candy hearts, but the song is a tale of love gone wrong.

“Better” is another favorite song on “OKAYEST.” The lyrics start off like an inner thought monologue laced with so much self-doubt. The chorus explodes with a gargantuan sound coupled with lyrics expressing the desire to rise above one’s own doubt, coming off like a personal declaration of dedication to self-improvement.

“Better” starts off with more dulcet tones and rises to an anthemic crunch.

As “OKAYEST” was unveiled to the public on what made for an unforgettable night, I’m convinced that the band selected the title of “OKAYEST” with a wink and a nudge.

They are not C level students of the school of rock – both live and on record, The Many Colored Death are more than “okayest.” They are downright amazing.

For more, listen to “OKAYEST” below via Spotify. Follow The Many Colored Death on Facebook by clicking here.