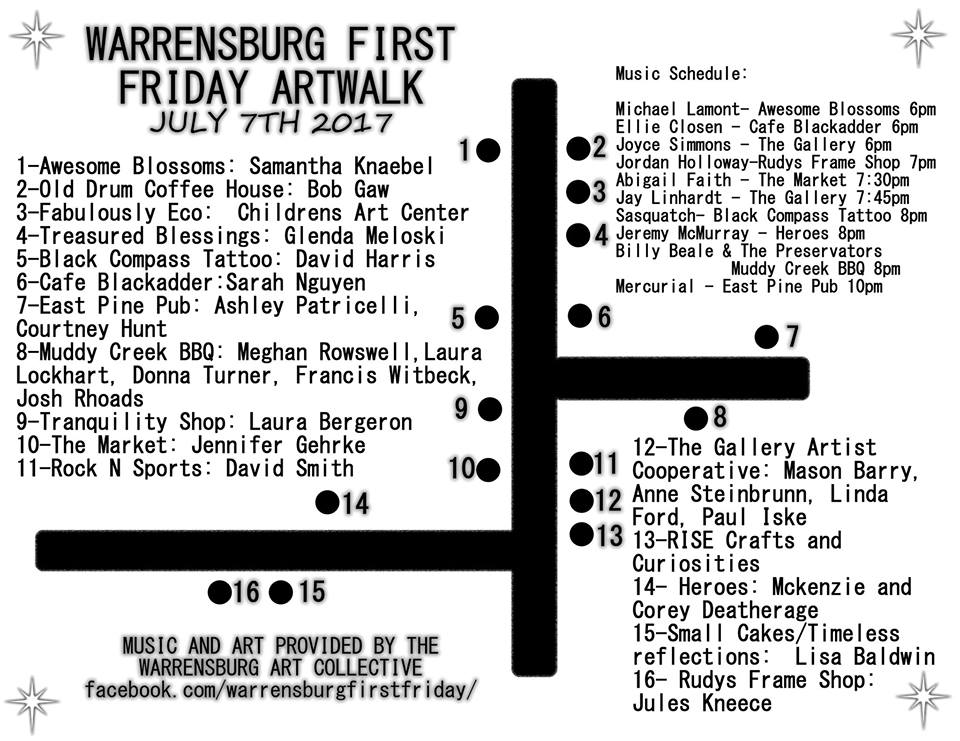 Warrensburg’s First Fridays Art Walk comes back with festivities planned including 16 businesses full of art and music. After dipping last month because local artists and musicians were busy with graduations and vacations, organizer Jay Linhardt said this month is back on track with a stacked schedule.

Summer in burg is fairly notorious for downturns in business due to the University of Central Missouri’s student population leaving for the summer, but Linhardt said he didn’t notice much an effect on traffic during June’s Art Walk.

A couple big changes are in the business landscape of downtown Warrensburg, which saw the grand opening of The Gallery Artist Cooperative and closure of The Bay, which had become sort of a hub for the Art Walks. The Bay’s closing marks a shift in not only the art community, but it impacts local musicians as well.

“Well, there is no denying The Bay closing is a real downer for the whole art and music community, and there is nothing that can replace it,” Linhardt said. “It was very timely that The Gallery grand opening was the next night after our last show at The Bay. Looking around at the crowd Saturday just re-affirmed to me that we are not going to let losing a building stop us, the show will go on. That being said, I am committed to booking shows at our other venues the rest of the year. There is no way we will go very long without having a full time music venue I will see to that.”

The Art Walks have helped bring together local artists as well as local businesses, converging two worlds that have long operated without each other in Warrensburg. Linhardt said he has heard nothing but enthusiasm from both artists and business owners after the first three Art Walks.

“The artists are inspired and the businesses are really starting to be proactive in promoting their own events,” he said.

The convergence also tiers into the local community through projects such as the Painted Piano Project from the Warrensburg Arts Commission and more from the Warrensburg Arts Collective, including plans to paint fire hydrants and more to increase the artistic atmosphere of downtown. Those connections have a splash effect from the artists to members of the community who make it a point to visit and participate.

“I get paid purely in compliments for all of this, and that is all I need honestly” Linhardt said. “I’m constantly taking on new projects and really right now I have more good ideas than I have time or people to delegate them too. Just putting on the Art Walk is a full time job, we’ve got several projects on the back burner currently due to this.”

As the Art Walks have grown, Linhardt has made it a point to accept artists from the neighboring communities of Sedalia, Mo. and Kansas City. Linhardt said the goal of The Gallery and the Art Walks is to provide space and opportunities for artists to grow.

“So to watch some of these young students double their output and increase their quality due to what we are doing feeds my soul and inspires me to work that much harder,” he said.

“Tell a friend, bring a friend, buy some local art!” he said. “I’d also like to mention that the newly formed chapter of Food Not Bombs will be set up outside The Gallery serving food and we’re really excited to help them get their message out.”

July’s First Fridays Art Walk will feature a multitude of musicians performing around downtown Warrensburg, including Michael Lamont at Awesome Blossoms at 6 p.m., Ellie Closen at Café Blackadder at 7 p.m., Jordan Holloway at Rudy’s Frame Shop at 7 p.m., Abigail Faith at The Market at 7:30 p.m., Jay Lihardt at The Gallery at 7:45 p.m., Sasquatch at Black Compass Tattoo Company at 8 p.m., Jeremy McMurray at Heroes at 8 p.m., Billy Beale & The Preservators at Muddy Creek BBQ at 8 p.m., Fuzzbeater at East Pine Pub at 9 p.m., and Ex-Bombers at East Pine Pub at 10 p.m.

The path of the art walk makes a “U” shape from Hout Street near the courthouse, south on North Holden Street, and then west on West Pine Street.

The event kicks off at 6 p.m. Friday, July 7 in downtown Warrensburg.

For more information, or for those who want to participate as an artist or volunteer, email the Warrensburg Arts Collective at warrensburgartscollective@gmail.com. For media inquiries, email Jay Linhardt at jayrocksthebay@gmail.com.