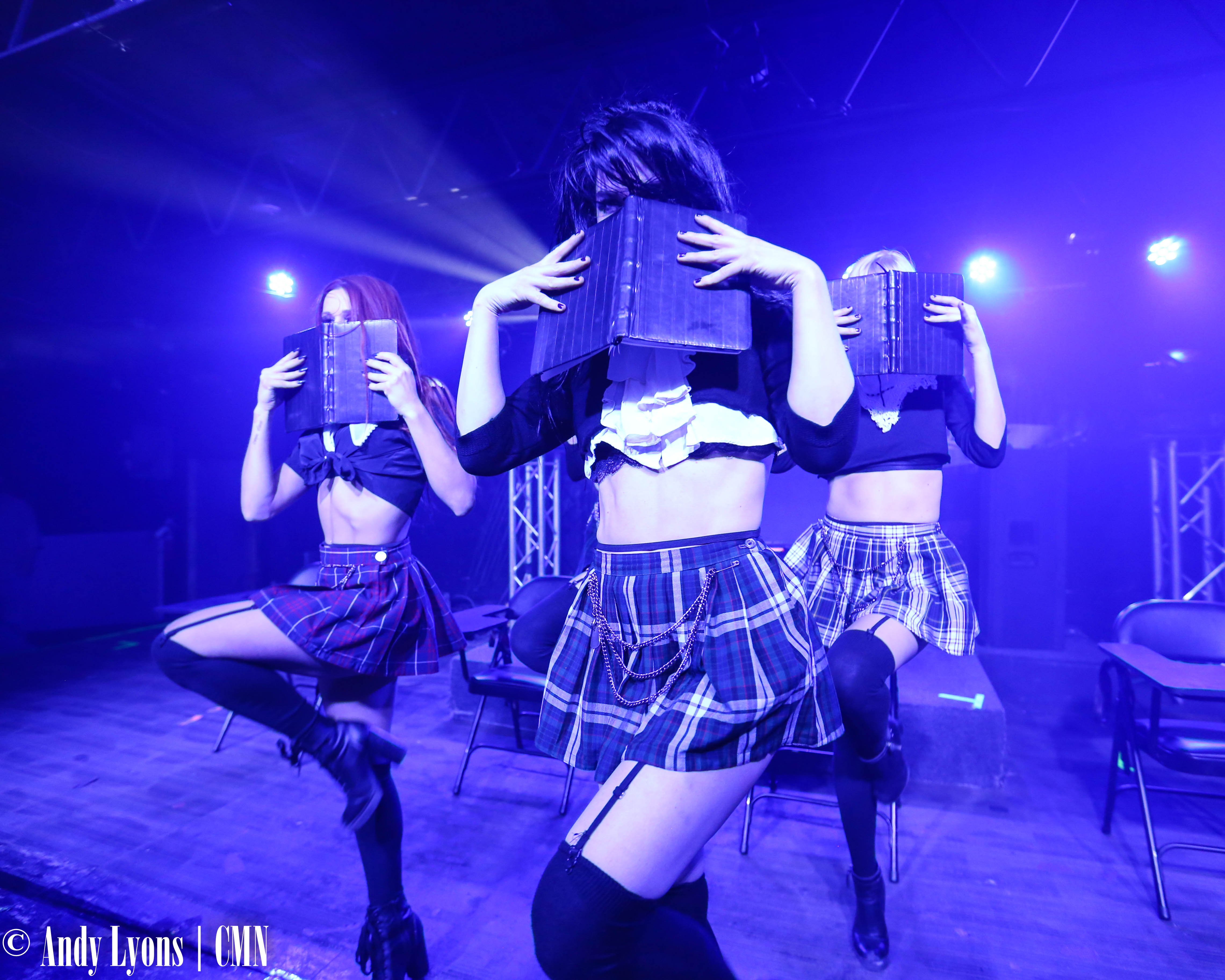 A weekend with Miss Nasty

This past weekend I had the sincere pleasure to spend time with Little Miss Nasty on the Good, Bad, and Nasty tour featuring Gina and The Eastern Block.

Our weekend started Friday night at Aftershock in Merriam, Kan., where Little Miss Nasty and Gina and the Eastern Block were joined by locals Orion Falls and Shadowsin.
Orion Falls kicked off the night with good energy and, despite a few missteps and new drummer jitters, did a good job of getting the crowd ready for the L.A.-based, sexy, pouty, punk style of Gina and The Eastern Block.

Gina and The Eastern Block includes guitar player and riff shredder Dave Orton, a “good at guitar” guy that “plays for the crowd” who is perfect alongside drummer, heartbeat, rock guru and workhorse Marc Jordan. The Eastern Block is fronted by the attitude-driven Gina Katon. If you crossed Betty Boop, Wendy O. Williams, Baby Firefly, the attitude of Iggy Pop and sprinkled in being raised in Hell, Michigan, you would get Gina Katon.

Jordan and Orton’s energy and talent are the perfect balance for Katon’s sexy, ornery, middle-finger-to-the-haters-style punk feel. As soon as The Eastern Block hit the stage with their first song, “Start a Riot,” you could feel the uncertain but intrigued energy from the crowd quickly turn into hunger for more. With songs including “Get Gone” and “I love you I hate you,” The Eastern Block brings to the stage a fiery, sweltering, dirty punk metal sound that makes you want to sweat while you dance.

By the time Gina and The Eastern Block closed their set with their sultry hit single “Sippin’ on a Forty,” they had the crowd eating out of their hands and wanting more.

I had the opportunity to sit down with Katon and Jordan. We talked about the birth of “Sippin’ on a Forty,” the video and how it started at a party of joyful debauchery with joke riffs on an acoustic and quickly turned into a show of their developing style. We also talked about everything from their most recent run with In This Moment on the Half God tour, their early beginnings in a Matt Sorum-produced all-girl group, their unbelievable run in Texas, the outstanding fan reaction at every stop, cats or dogs, and her love of balls.

Next to hit the stage was Shadowsin. The group is fronted by the beautiful and powerful vocals of Laura Roach backed up by guitar player Kyle Potter, Carlos Garcia on bass and Mike Krueger on drums. Shadowsin was highlighted by the clear, crisp, powerful vocals of Roach and had no problem keeping the crowd rocking and ready for the headliner with tracks like “Break the Silence” and “Into the Night.”

Finally, it was that time of the night for our headliner to take the stage: an all-woman, rock-and-roll burlesque dance troupe known to the world as Little Miss Nasty. The Good, Bad, and Nasty tour is LMN’s first national tour and despite some mistaken walls that led to dressing room stage dives, and unruly cables, Katon and Jordon told me the tour was going on without a hitch.

You would never know it was Little Miss Nasty’s first big nationwide tour by their performance. From the moment the ladies took the stage, they owned it. As the lights went down and the music hit, you could see from the first steps of the four sensationally beautiful and scantily-clad women that you were in for a passionate, all-out sex appeal-filled dance routine. Accompanied by some of today’s hardest-hitting metal tracks, the ladies of LMN brought spirited, sultry dance moves that left you unable to look away.

Little Miss Nasty’s powerhouse of a lineup is producer, creator, choreographer and “Mother Nasty,” Gina Katon. She brings along choreographer Tarin, “the lead O.G. blonde girl.” They are the essence of LMN and are joined by the “new blondie, a little baby girl,” Taylor. Finishing off the lineup is the fiery redhead and “badass professional dancer” Deidre, who just finished her Las Vegas stint with Britney Spears.

We caught Gina and The Eastern Block and Little Miss Nasty a second night at a great new venue in St. Joseph, Mo., the Cafe Acoustic Concert Hall. Like the night before, the two groups played and brought all the energy needed for a stadium but still made an intimate connection with every fan.

If you want great music, unmatched sexiness, all the beauty of a centerfold and all the dance moves of a Broadway show, make sure to catch Gina and the Eastern Block and Little Miss Nasty. They offer a can’t-miss performance.