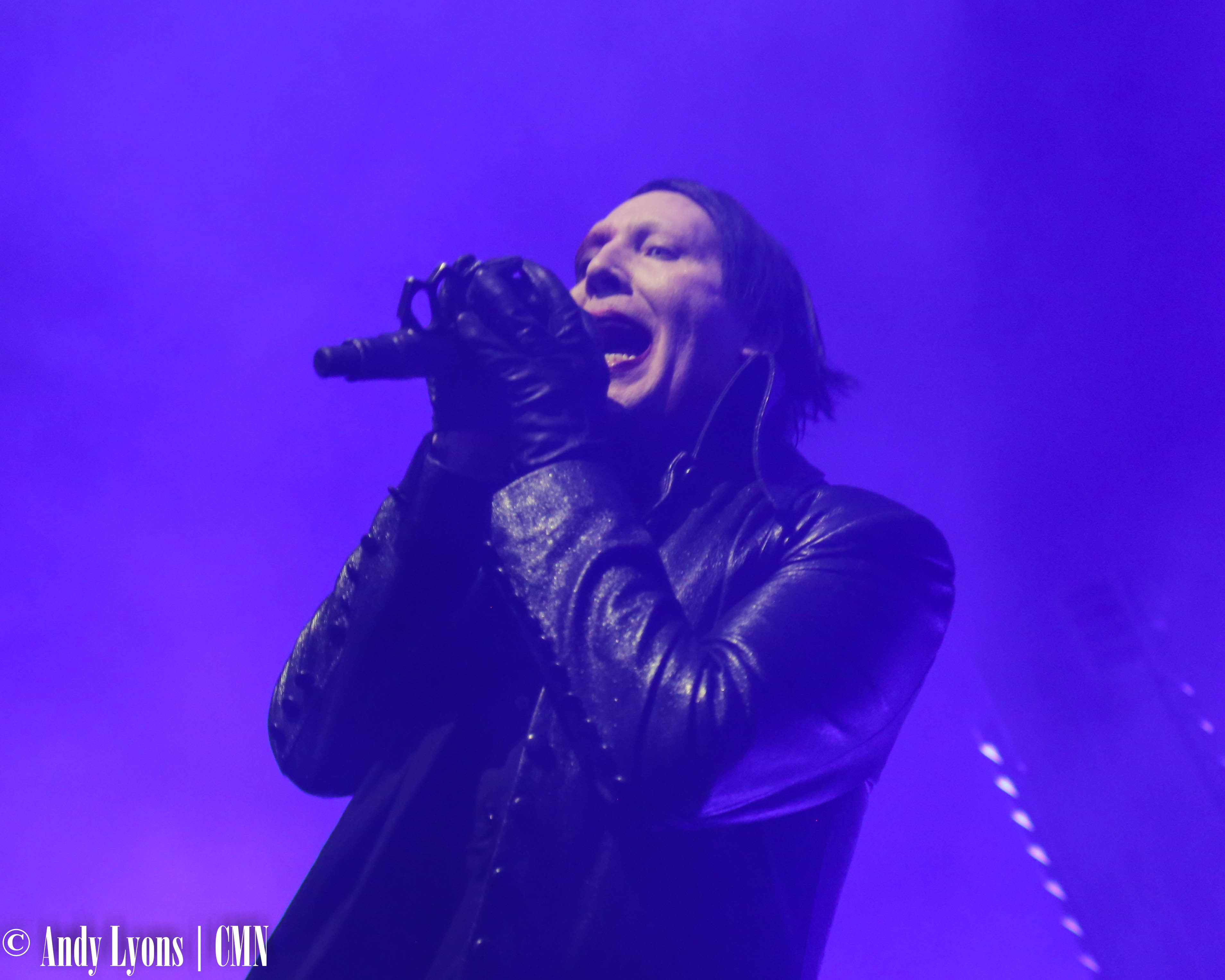 Shock rocker Marilyn Manson postponed several tour dates last fall, following an on-stage injury where a prop fell on top of him. One of those dates was 98.9 The Rock’s Freaker’s Ball, and a make-up date was added for Sunday Jan. 28. The show sold out, and by 6 p.m. people were lined up around the block for a chance to see the star in the flesh.

People were still filtering in during a DJ set by opener Amazonica, and by the time the lights dimmed for Manson a capacity crowd of 2,500 people were packed into the Arvest Bank Theatre at the Midland for a memorable night with a living legend.

Through heavy smoke and strobing lights, it was obvious Manson is still suffering from the injuries he sustained. He used an electric wheelchair – fashioned to look like a priests chair with a high arching back, and donned a walking boot on his right leg. And while the singer seemed a bit stiff, his vocals told a different tale.

The crowd was ballistic from the time Manson hit the stage. While there wasn’t much in the form of crowd surfers and moshing that is typical of the genre, instead the crowd was very vocal – singing and cheering, and consistently had their hands in the air throwing metal horns or taking video of Manson.

After nearly each song, Manson was attended to by two “doctors.” That is, two people dressed in surgical outfits Manson said were “not real doctors.” Throughout the show they adjusted his walking boot and seemed to make sure he was generally alright. He joked that the crowd could shoot them, and quickly clarified “I mean with a hypodermic needle into their penises.”

Manson seemed laid back on stage considering his injuries. Before jumping into songs he would sing small medleys such as the chorus from Nirvana’s “Rape Me” before his classic “Disposable Teens” and later in the set he sang “I don’t like the drugs, the drugs like me” between songs.

Despite his injuries, Manson’s performance was top-tier, a glorious example of his longevity. He played songs from across his 10 album catalog, including the song that catapulted him into the spot like “Sweet Dreams (Are Made of This).” During the track, which was originally done by the Eurythmics, the backdrop behind Manson looks like scribbles and the two “doctors” sit next him on a gurney while the singer uses a flashlight in one hand microphone in the other to deliver the song.

Overall the show more than made up for the postponement last fall. For a Sunday night, the crowd was ready to rock out and didn’t avoid alcohol or other libations people have come to expect at a concert. For a relatively dull January, having Manson come through Kansas City was the perfect way for the rock crowd to kick off 2018.

For the latest in arts and entertainment, be sure to follow Central Mo News on Facebook here.