LATEST NEWS
11:49 PM
Home Entertainment Concert All That Remains, Sons of Texas, and Paralandra prove Sunday’s are alright for rocking 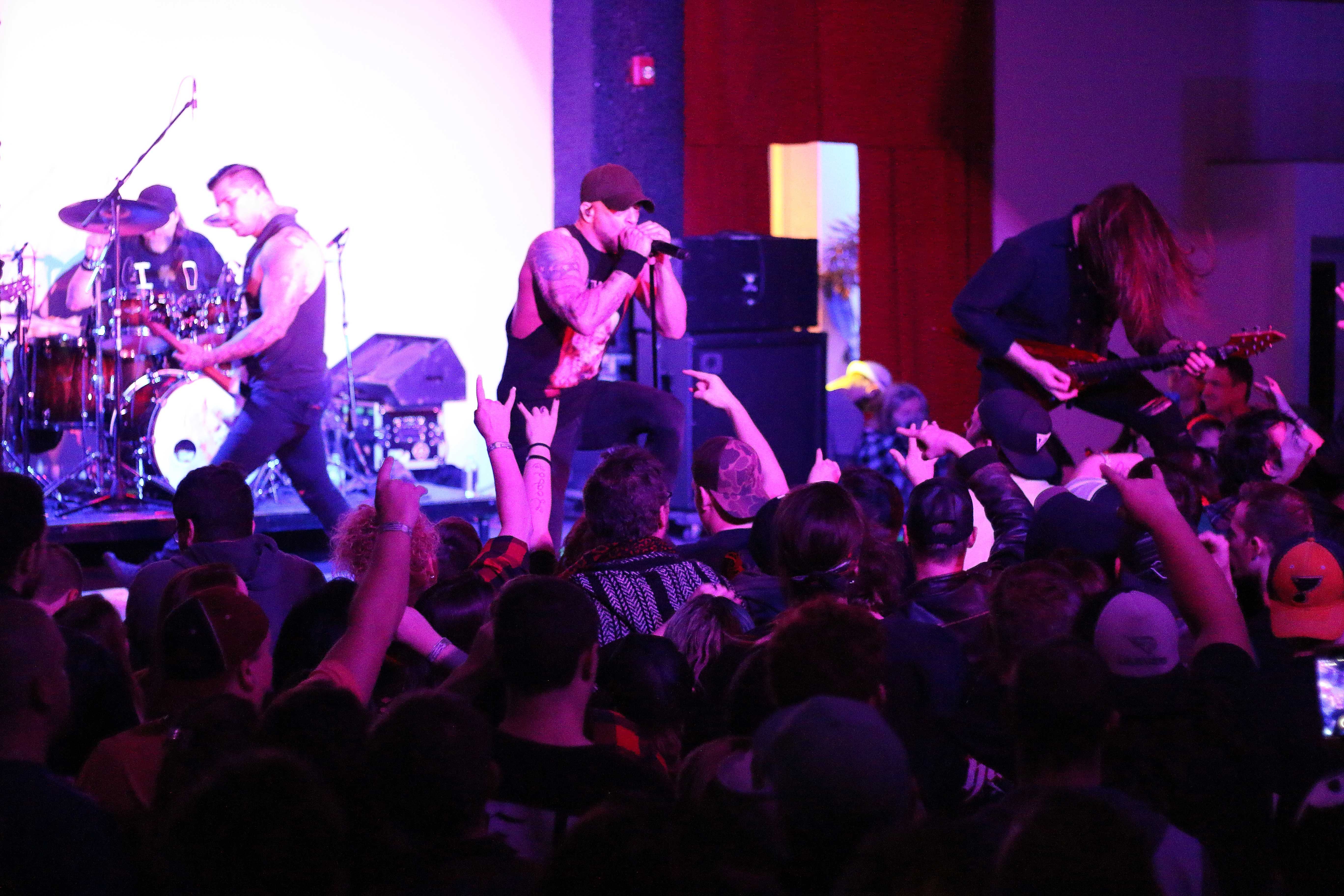 All That Remains, Sons of Texas, and Paralandra prove Sunday’s are alright for rocking

All that Remains, Sons of Texas and the home-grown Paralandra proved with ease that Sunday night is a great night for a rock show. Some Sundays have proven to be a hard night on ticket sales, but Sunday December 10 in Springfield, Mo. at the Regency Live! was a sure exception. With a line of fans around the corner, when doors opened it was easy to tell it would be a great night and The Regency Live! would once again be a great host.

Kicking off the night was the local loved Paralandra, radio station 2017 Q102’s battle of the bands 2017 winner.The audience was already primed for their opening, thanks to sound check being piped through the exterior speakers. We got to hear guitar player and vocalist Casandra Carson belt out one of her trademark screams and the line reacted with claps of excitement. So when drummer Nick Gray, lead guitar player Paul Carson and bassist Sawyer Rikard took the stage the anticipation for Casandra was already high. She responded in kind as she kicked off the band into their nonstop hair flying, heart reaching, classic, yet refreshing pure rock n’ roll non-stop show.

Casandra brings everything amazing from the classic female vixens like Jett, Ford, and Doro while showing inspirations of Lzzy Hale. She is nothing short of amazing with vocals that rock the soul and shreds to match. Rikard and Paul Carson played in perfect unison as they came together with lighting riffs and heart pounding thumps – giving fans everything they want and need from a rock show.

Paralandra had great crowd interaction and hair flinging that would make even the best haedbangers proud. Gray had no issue keeping all that energy on time with his precision beats and chest pounding fills. By the time Paralandra started their third song “All Fall Down” the venue was on fire and they even drew an audience from Sons of Texas front man Mark Morales and All that Remains axe man Oli Herbert as they could be seen side stage jamming along with the rest of us through the rest of their short but rocking set. You would be hard pressed to find a better opener than the stadium-ready Paralandra.

This was my first time to see the Sons of Texas. They are a fairly young band out of McAllen, Texas. They say everything is big in Texas and S.O.T. far surpassed and supported this theory. Sons have only been a band since 2014 and are only in their mid-20’s, but owned that stage like seasoned veterans. The blazing beats of drummer Mike Villarreal and deep grooves of brother and bass player Nick Villarreal made up a perfect team of percussion with a connection you could feel all the way in the back. You could also hear the deep Texas roots in the guitars of Jon
Olivares and Jes De Hoyos as they took turns melting faces with the classic work division style of switching lead and rhythm duties.

Vocalist Morales engulfs a stage with his presence and is the perfect front man of a bluesy metal band and immediately had the crowd eating out of his hand with his Anselmo-quality gruff and Cornell-felt screams. Morales made it a habit of letting his passion bring him to his knees leading to close interaction with the crowd and a connection with each member in the range of his voice. Sons of Texas are a fun hard rocking band and it shows in their performance how much fun they are having playing great songs that span the range of heartstring pulling ballads and headbanging rock. Big things are on the horizon for Sons of Texas because with great tunes and a passion filled show they are sure to make waves.

Paralandra and Sons of Texas were perfect support for headliner All That Remains, veterans of all things metal, rock, and ballad. A modern day rock band the group has been rocking radios and stages all over the land and bring a devoted following to every show. In support of their eight full length studio album “Madness,” released in April of 2017, ATR hit the stage with all the energy and excitement expected from a great band.

All That Remains consist of newest member and bass player Aaron Patrick, drummer Jason Costa, rhythm guitarist Mike Martin, and founders and only originals lead guitarist Oli Herbert and vocalist Phil Labonte. It’s no doubt Patrick, Costa, and Martin lend a quality sound and energy to the show but there is little argument that Labonte and Herbert are the ones to watch on stage.

Herbert is such a fun and talented guitar player and when they went into their title track “Madness” you could tell he still really enjoyed playing and had no issues pushing himself with solos of blazing precision and rock and roll moves. Labonte lead the band through many of their greats including “No Knock” and “Hold On” before breaking out the chart climbing Garth Brooks cover “The Thunder Rolls.” A metal vision of a country classic, while a bold choice, was given the very unique polish of All That Remains and proved to be a crowd favorite.

They continued through the set with killer metal tracks like “Tremble” and “Air That I Breath.” Then Labonte slowed down the packed house “they told us we were crazy a metal band doesn’t do ballads,” Labonte told the crowd, “so we gave them What If.” Despite obviously not feeling 100% Labonte proved again that he is one of the best vocalists and scream growlers in the business and hasn’t lost a step. Finishing off the night Herbert and Labonte take front of the stage to blaze through “This Calling” and close out in full force an energetic, passionate top notch
performance with “Two Weeks,” leaving the stage with the crowd definitely wanting more, as chats of one more song filled the venue.

All That Remains, Sons of Texas and Paralandra are must catch bands. The show was a perfect mix of styles and energy leaving all who attended happy and rock satisfied.