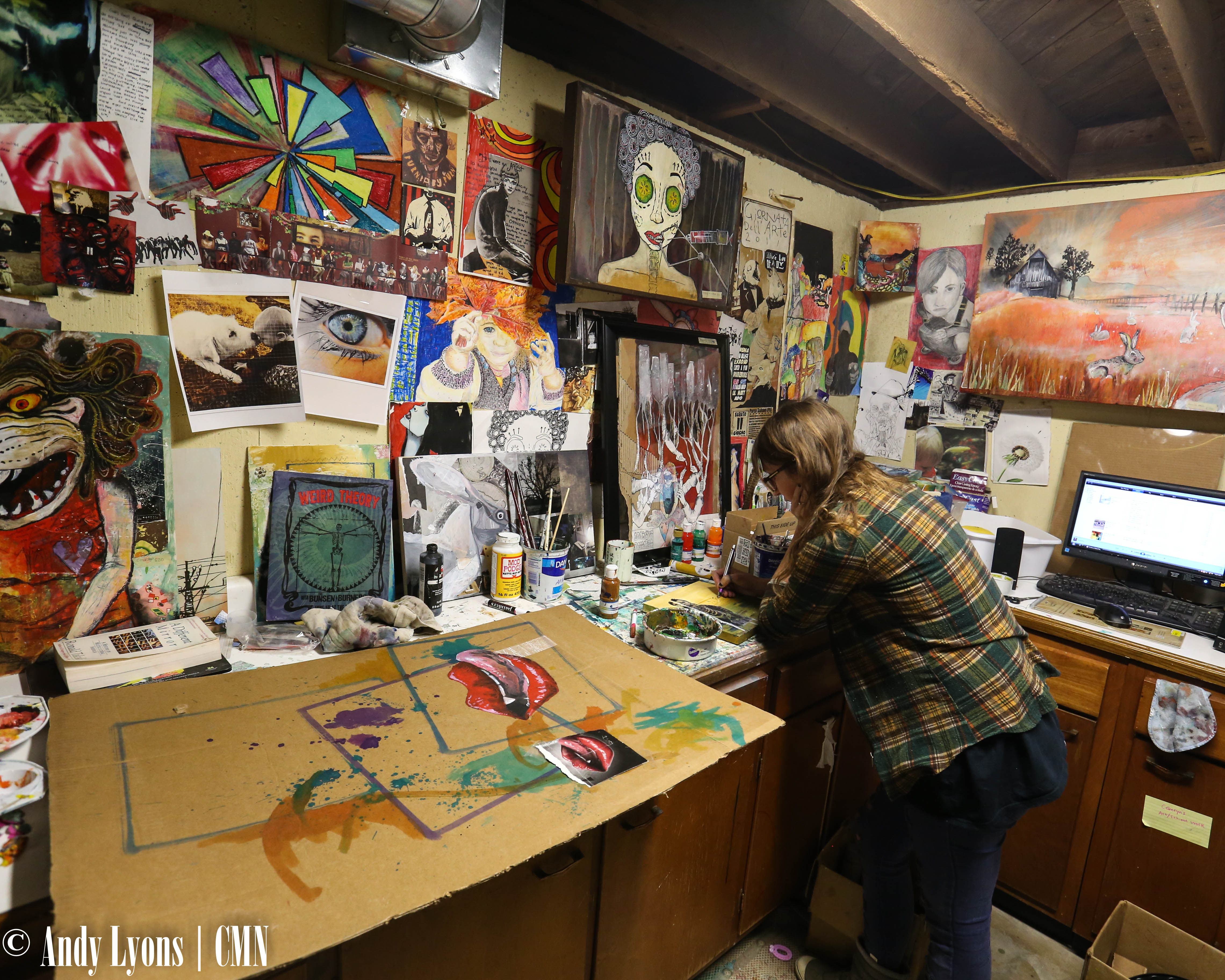 The Art of Life

The Warrensburg First Fridays Art Walk brings a myriad of artists, musicians, and patrons to the downtown area. Among the art, there are several styles that stick out – whether it be from a busker on the street or works displayed in local shops such as The Gallery Artist Cooperative. Among the 200 pieces displayed inside there are many standouts, including pieces such as a dancer painted in a shadowbox, the hands of guitarist working the instrument, and a punk walking into his chaotic life. 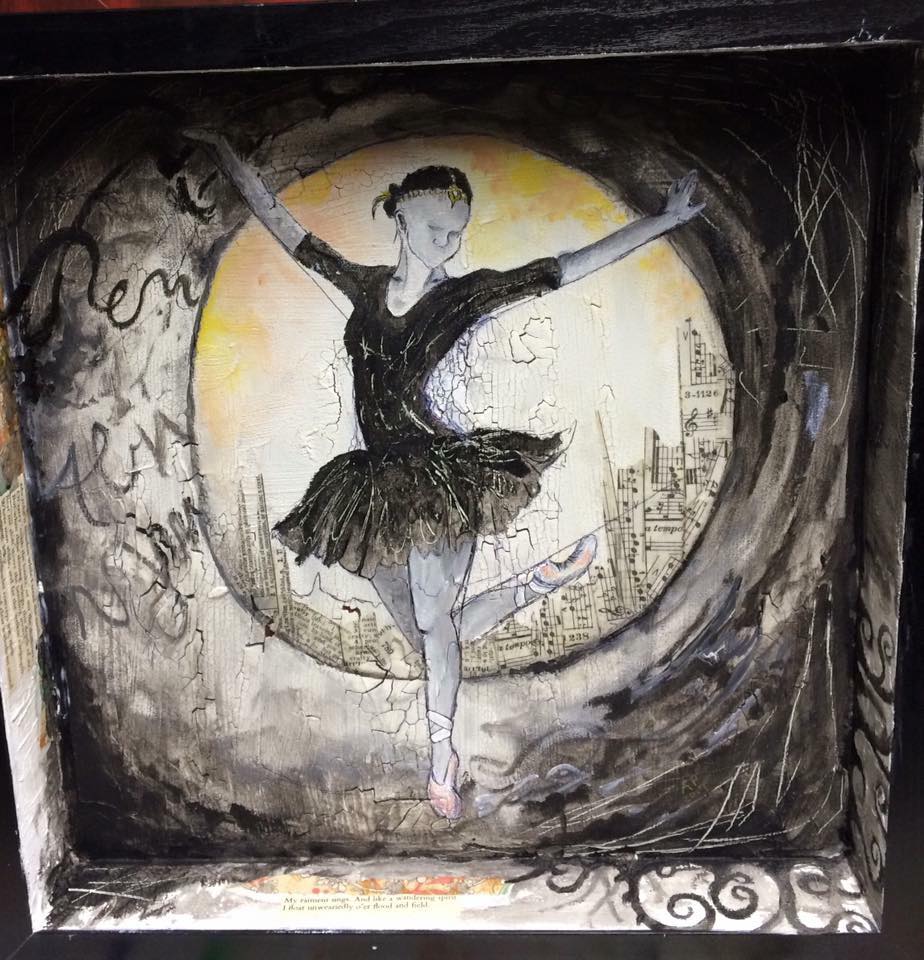 The art of Ashley Patricelli stands out in its uniqueness, her pieces a mixture of paint, ink, photo transfer and pasted on lines of text from books. Each piece tells a story, ranging from social commentary to serene landscapes.

Patricelli is an interesting character, much like her art. Her husband is in the Air Force, and she has lived across the world – including years in Italy and Japan. Throughout that time she was a jammer in roller derby, has four children, and landed on a farm outside of Knob Noster. When it comes to her artwork, she draws motivation from everything around her in a multitude of ways.

She said a lot of the time her motivation comes simply from words – whether it be lyrics to a song, words in a book, or something on TV, if it strikes her she tries to portray it. Her art takes form through a whimsical method of playing, and her paintings come to life.

“I just play, I start with a general idea and things just happen sometimes, by accident, that work out,” she said. “And I find a lot of things out by playing with it.”

Patricelli doesn’t have formal training, however she said she fell in love with painting during a gen ed class. She had done pencil and charcoal drawings and doodled, and then her teacher used photos and had the class paint them in certain styles. After her class, Patricelli kept her work and didn’t paint for years until she and her husband moved to their first military base. Friends would see the paintings and make requests so she got back into it.

“They complimented my paintings and started requesting things, so I started painting again,” Patricelli said. “Being in Italy was a wonderful place to get inspired. There was art everywhere, both in nature and architecture and in the shops. I did a lot of requests in Italy, got mixed media books from the library, and went to really great art shows where I got to see a lot of wonderful creativity. I found that painting was a great way to feel like myself again. After having three kids in four years, I felt like my soul was being sucked into the black hole of motherhood. All of my passions and goals were geared towards them and it made me feel like I had lost a little of the self that I was before kids. Painting gave me some of that self back.” 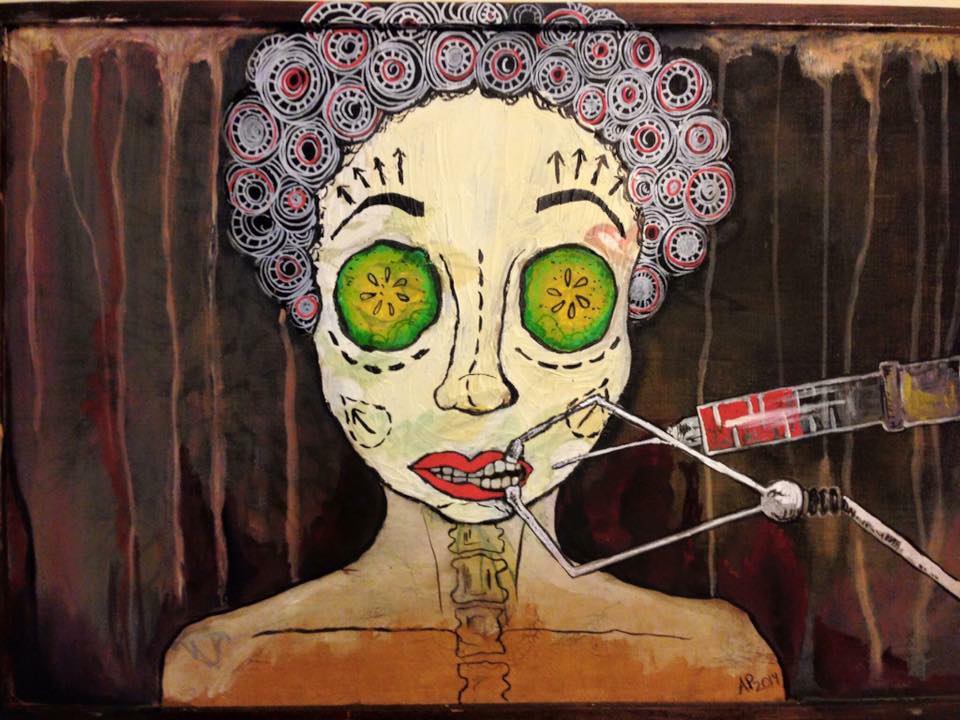 She uses her art to portray a myriad of topics, and isn’t afraid to dabble in tinderbox social topics such as pharmaceuticals. She works on cardboard, canvas and other mediums, noting she likes to use cardboard because she can rip it to give her art more texture. Her piece “Beauty and the Beast” is inspired by the show “Nip/Tuck” and Patricelli used the imagery to show the lengths people will go to try and preserve their beauty. In her studio is also a landscape piece motivated by life in the country which Patricelli describes as more peaceful. She described the oranges and pinks of the sunrise, which are the colors she used primarily on the piece. Her daughter gave her the idea of painting something pink with rabbits because they see so many in the spring.

Patricelli said she usually she draws what comes to mind through various means of motivation, however, she has started a series that focuses on a specific theme for the first time – the effects war has on future generations.

There is a piece about the Vietnam War that uses imagery and quotes to focus on how even now, more than 40 years later, deformed Vietnamese babies are being born as a result of the U.S. using Agent Orange during the conflict. 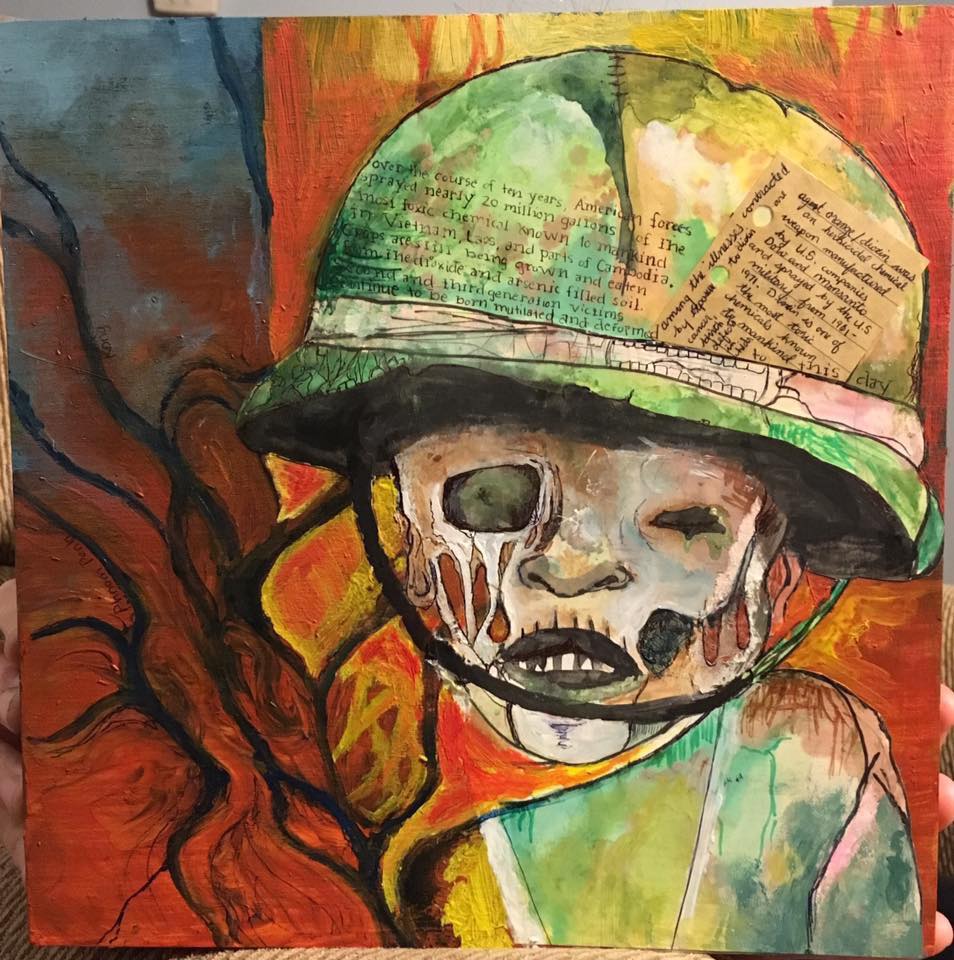 “I just feel like when we go to war a lot of times we don’t think of the future and how we’re impacting the entire Earth with the poisons and the explosions and the bombs. So I wanted to highlight that the decisions we choose today are going to affect what happens years from now.”

The pieces in the series include quotes to tell the story the painting is trying to portray, with the words helping the thought behind the piece reach viewers. She has three pieces in the series so far and has plans to add more to tell the stories behind some of the not so well known conflicts and their impact on people generations removed from the conflicts themselves.

Her favorite piece is one she finished earlier this month during the Dickens Chrismas event in Warrensburg called “Duality.” The piece features Jesus and Satan in a face off painted on cardboard. 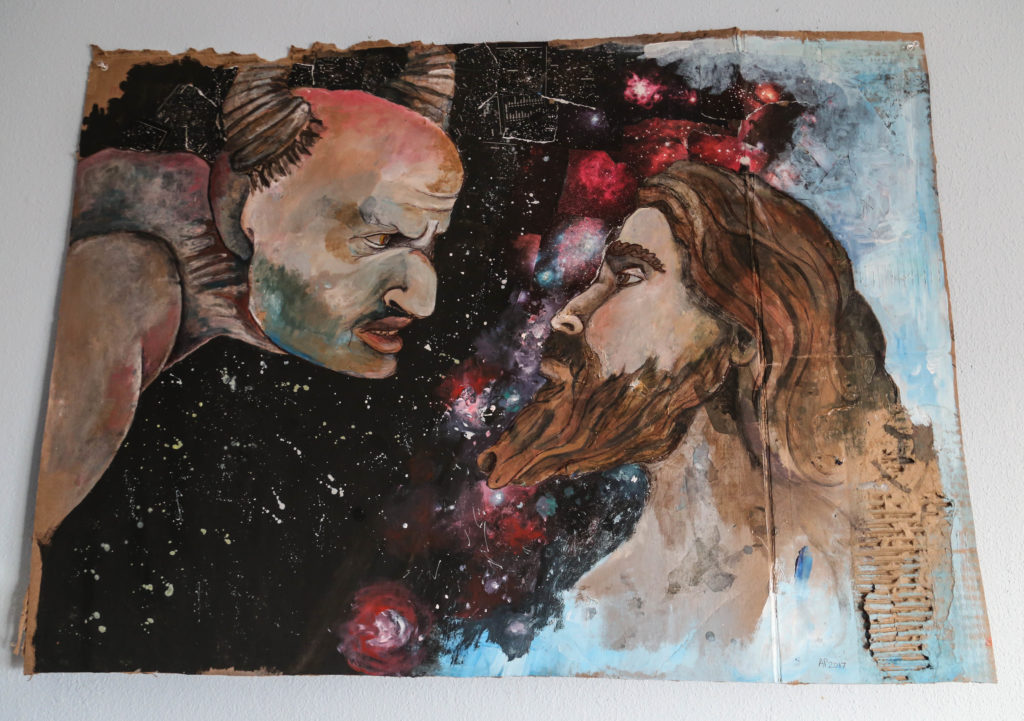 “It’s my favorite because I just think it’s the best drawing I’ve done, the faces and the colors,” she said.

“Also it is one of life’s universal truths. Our culture sees evil as something that needs to be conquered and destroyed. I’ve been reading a Hindu book and it is interesting they see evil as good’s other half. The two forces always find a way to balance out and one cannot be without the other. I just thought it was a really interesting point of view. The painting was inspired by a random photo that I came across while looking through an old black and white book about gothic churches and gargoyles. The fact that I was reading the Hindu book at the same time just kind of happened to work out. I used outer space as the background because Jesus and Satan are spiritual forces, not bound to earth.”

Patricelli’s art will be featured in the Old Drum Coffeehouse and Bakery, 211 N Holden St. in Warrensburg, for the month of January. For more, follow her Facebook page here.