LATEST NEWS
01:42 AM
Home Entertainment Concert DOOMBLUES throws down at The Bay 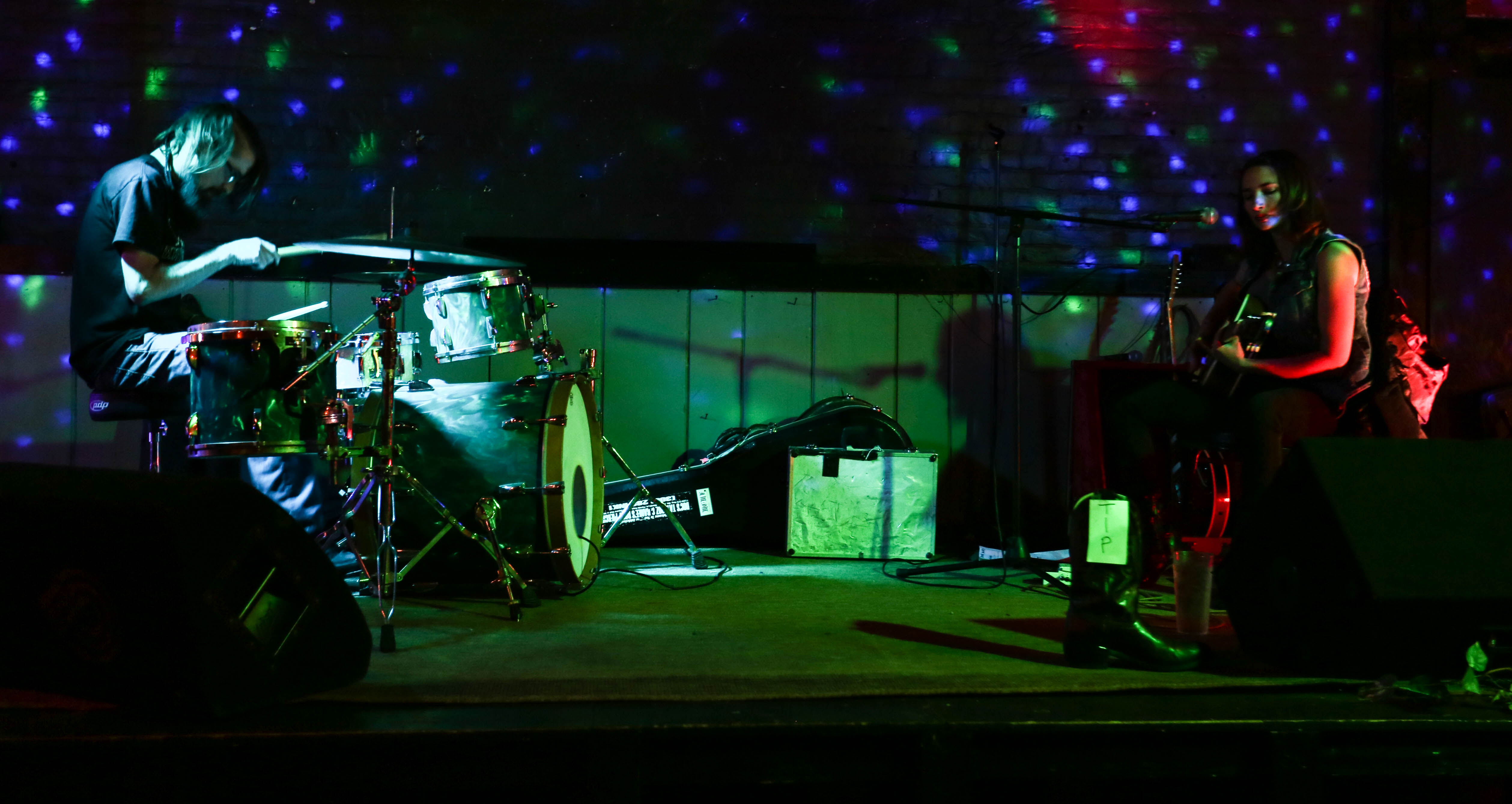 DOOMBLUES throws down at The Bay

The twang of blues guitar and pounding of drums echoed up Pine Street Wednesday night as DOOMBLUES played a rare show at The Bay in Warrensburg. Molly Gene, who typically plays as her solo act, the One Whoaman Band, and Jay Linhardt, production manager at The Bay, have only played a handful of shows together including the intimate, laid back set.

The two have known each other for years and have played together on multiple levels, but DOOMBLUES is more of a fun act for the two to let loose with.

“I was playing solo, and Jay was my roadie back in the day five, seven some years ago and we toured all over,” Molly Gene said. “He played in a heavy metal band, Apehanger, and for a while I played bass with them. And then, ya know, we’re all just hanging out and he was playing drums and then he would jam on my songs. And now we’re kind of writing some new stuff, so it just kind of morphed that way. I enjoy doing shows with Jay every once in a while because it’s a hell of a lot less work physically for me because I don’t have to play drums with my feet.”

The two have separate, strenuous schedules with Molly Gene’s solo act and teaching yoga and Linhardt’s involvement at The Bay and the Warrensburg Arts Collective, so the two don’t have a lot of opportunity to practice.

“It’s pretty cool because we don’t have to practice very much,” Linhardt said. “I think we had a show scheduled before we even practiced.”

The two have the synergy of a band the plays together year-round, with Linhardt taking cues and adapting to Molly Gene’s tempo changes throughout the set. The duo played a range of songs that included some originals, songs from Molly Gene’s solo set, and some covers – including opening with a track from Mississippi Fred McDowell.

Despite the change in her usual setup, the energy radiated from Molly Gene could be felt throughout the bar as she gyrated and bobbed her head over her guitars throughout the night. About midway through the set Linhardt checked his sticks to ensure he hadn’t broken one as he pounded the rhythm of the blues-laden setlist.

The show was a warm-up in sorts for Molly Gene, who kicks off a tour next month at the Motreal International Blues Festival before heading down the east coast of the U.S. She recently released a live album recorded at the Blues Rules Festival in Switzerland last year.

She had taken some time off to pursue finishing her degree, but she said she came to realize all she wanted to do was play music. As she readjusts with a tour, she said she also plans to head to San Francisco with her boyfriend to play on the west coast for a while, with a goal to write a new album by the end of the year.

“I’m slowly actually starting to finally write again, I’m so stoked because it’s been a long time coming,” she said. “I just dried up. I quit writing and I’d get made because I was playing these old songs forever. But I’m finally writing again and playing a lot of old Delta Blues kind of stuff, inspired stuff, and putting my own twist on it. I don’t feel like I’m ready to record yet but I have enough merchandise and stuff ready, I can go out on tour now.”

Listen to our full interview with Molly Gene below: