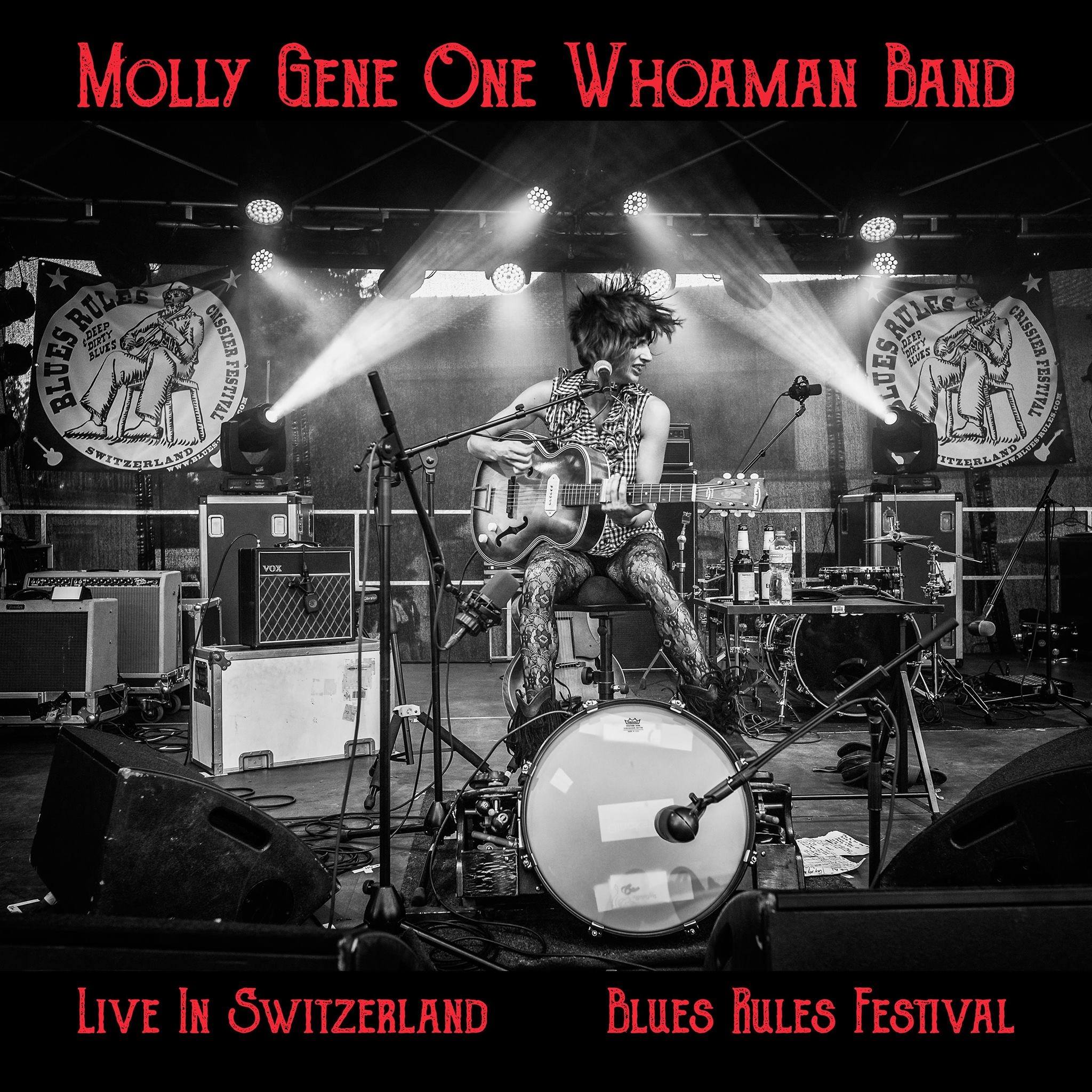 The live album is an undeniable tradition. It’s been there for a while: Thin Lizzy’s “Live and Dangerous,” Black Flag’s “Live ’84,” the Kiss “Alive “albums and the list goes on. To be honest, a live album is usually a massive hit or miss.

The best live rock music albums capture the raw unadulterated power of a rock performance. When I think of a good live rock album, I always think of a loud, blistering guitar sound. I want to hear something plugged in and amped up that sounds like the sky is falling.

The worst live albums almost always suffer from poor recording and production, too much feedback, the vocals are too low in the audio mix, etc. I’ve never been a sound engineer, but I assume it’s a chore of a balancing act.

Adding her name to the list of live albums comes Molly Gene, The One Whoaman Band, with her most recent album “Live In Switzerland: Blues Rules Festival.”

The live album showcases the anomalous nature of Molly Gene. Here is a musician born and raised in mid-Missouri rocking her Delta-Thrash ways in northern Europe.

The fact that Molly Gene has had to opportunity to rock faces off in Europe is a testament to the power of music as a universal language, with the ability to transcend borders.

When I first popped this CD into my laptop, right at the opening chord, I was flooded with memories of seeing Molly Gene live at The Bay in Warrensburg, Mo. The way the album is recorded, the listener almost feels part of the crowd. It’s a sonic snapshot. This first thing that draws the listener in is the guitar. It’s so raw and gritty. Within the audio mix, the vocals and the guitar sound are evenly mixed and balanced, with neither one overriding the other.

From the intro, the listener quickly becomes engrossed within a high-octane alcohol soaked ride. I’m not sure if this is the best set Molly Gene has ever performed, but it’s a damn fine example of the explosive energy of her live show.

Her music is a hybrid concoction, combining the twang and soul of delta blues mixed with hard rock ferociousness. The disc starts off with the boogie and bop of “Kiss Me Quick,” a rowdy up-tempo number. The one two combo is followed up with “Waitin’,” the song that was my first exposure to the One Whoaman Band, and is still a favorite. The guitar work and sliding on it packs such a wallop.

The disc contains 14 songs, and there is an even split of seven covers and seven originals. The perfectly placed cover in an artist’s set is like magic, and a thunderous gem is delivered on this disc on track nine, a cover of AC/DC’s “TNT.” The song is always a highlight and gets an excited crowd response. She also brings the house down with a cover of Mississippi Fred McDowell’s “Louise.” The passionate delivery on this one is for the ages. With her wailing vocals, one can tell that Molly Gene really put her heart and soul into the song.

The only disappointment of the album is that Molly Gene’s cover of The Coasters’ “Down in Mexico” is absent. That’s a number that always gets the crowd moving. This disc felt like a sample of what Molly Gene’s live set is like. The real power of her music needs to be experienced live and in person to be truly felt, but this is a suitable audio delight for those who are both familiar and unfamiliar with her music.

For more, follow Molly Gene One Whoaman Band on Facebook here. Pick up a copy of Live In Switzerland: Blues Rules Festival from CDBaby here, from iTunes here, or from her website here. Give it a listen on Spotify below: