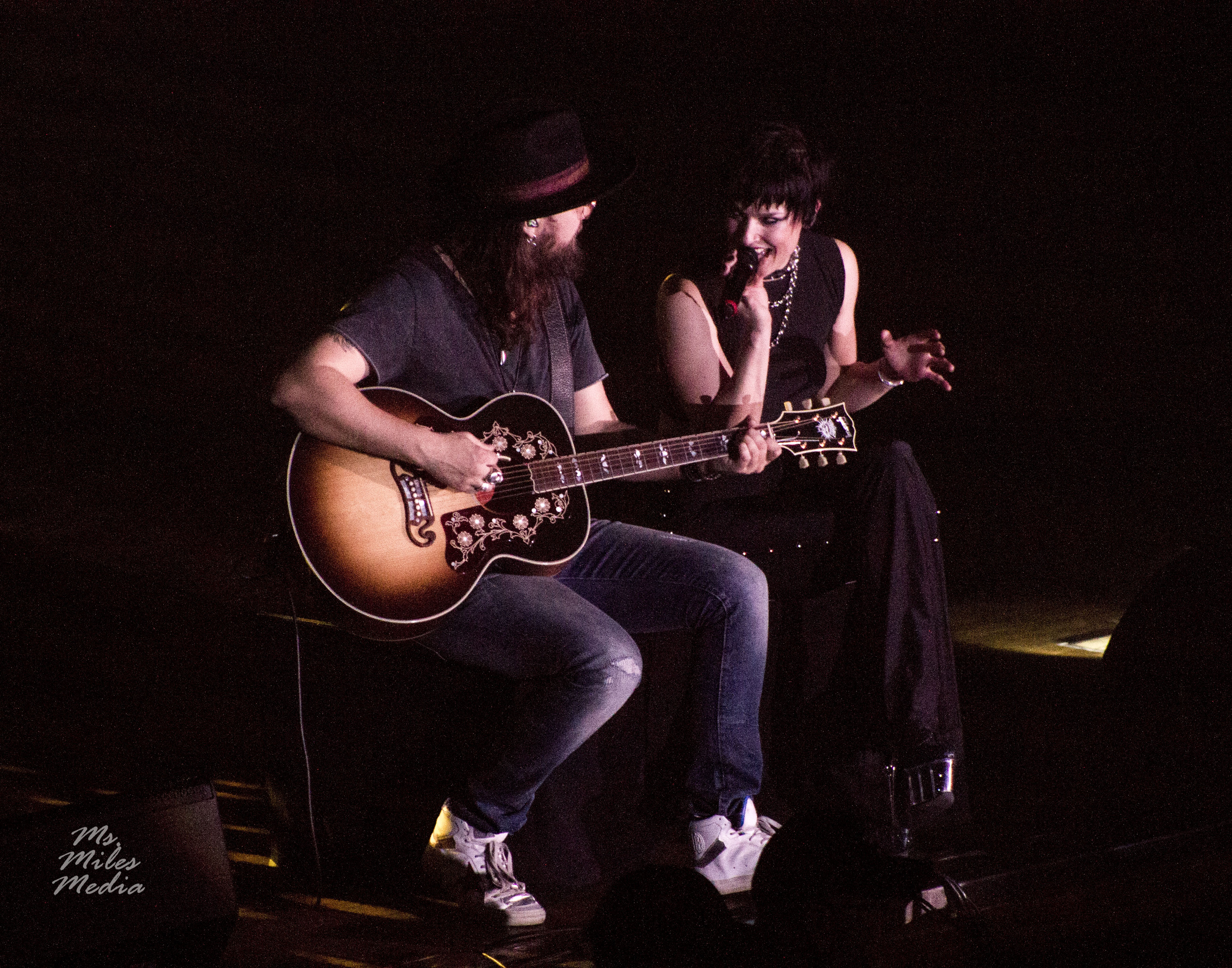 The excitement was off the charts for the “Future is Female” tour on Tuesday, Dec. 4 at the Abou Ben Adhem Shrine Mosque in Springfield, Missouri.

Springfield and the Shriners played host for Halestorm and In This Moment with special guest New Years Day.

Coined by Lzzy herself, the “Future is Female” tour has been a force to be reckoned with since its first run earlier in the year. The three bands are all fronted by amazingly talented musicians who happen to also be badass ladies of rock bringing heart, passion and a fire of talent unmatched by their male counterparts.

Kicking off the night was the ever-powerful New Years Day. Fronted by stand-out rocker Ash Costello, NYD is an Anaheim, California-based band formed in 2005 that garnered a loyal following on Myspace in the early days. They earned even more fans with their run on the Warped tour and subsequent three studio albums and countless extended plays and compilations.

When Central Mo News met with Costello in August, her excitement to be included on such a huge tour was only matched by her joy for the release of “Disgust Me.” Dec. 4 was no different as New Years Day hit the stage with all the passion and energy of day one. Riding the elation of their most recent release, “Skeletons,” it was obvious NYD was ready to rock the house.

Despite some lineup changes over the years the current line up of Nikki Misery on rhythm guitar, Frankie Sill on bass, Brian Sumwalt on drums and Austin Ingerman on lead guitar make for perfect chemistry and play well off each other while highlighting each other’s strengths.

Costello makes sure to let everyone know her job is to get people jumping, headbanging and dancing.

“I’ve got to get you ready for In This Moment and Halestorm,” she made clear while demanding audience involvement or no invite to the goat sacrifice, or VIP some call it.

New Years Day did just that when they played jam-alongs like “Kill or be Killed,” their Pantera cover “Fucking Hostile,” and the sing-along jam “Scream.”

Costello thanked fans and expressed how proud she is of all fellow female rockers for taking over the metal world: “We jam harder and look better doing it,” she said as she gave a flirtatious wink to the crowd.

A perfect pick for support on such a dynamic tour, New Years Day have no problem holding their own alongside fellow tour mates. What they might lack in stage effects in comparison, they more than make up for with talent and intensity. Closing their set with “Defame Me,” they easily made fans of everyone in attendance.

Co-headlining the night of female empowerment and love was the visually-stunning, musically-moving and soul soaring L.A., California-based In This Moment. Fronted by the many alter egos of Ms. Maria Brink, In This Moment is more than just a band that plays a set — they are a vision that sets out to move your emotions.

Brink has always made it clear she has a picture in her mind of what she wants fans to see and feel. Through their music and artful choreography, Brink uses every bit of all senses to make for a moving experience.

Brink and guitar player Chris Howorth are the main driving force on the band’s vision and masterfully use Travis Johnson on bass, Randy Weitzel on guitar and Kent Diimmel on drums to bring to life music and a show for the ages. With her blood goddesses, costume changes, fog machines and coordinated lights, Brink had the audience in the palm of her hand from the hard-hitting opening song “Blood” to the fan-favorite closer “Whore.”

With hits like “River of Fire,” “Adrenalize,” “Roots” and the Phil Collins cover of “In The Air” in the set, In This Moment never left fans disappointed. Every song is a story with the intention to bring forth an experience in itself. The powerful dancing in the wolf mask of “Big Bad Wolf” makes you feel the forest and struggle. The emotion and aura combined with the effects during “Oh Lord” make you believe in a greater force and the power of love.

While some might get lost in the shadow of a force such as Brink, the high priests of the blood legion do not. Howorth, Weitzel, Johnson and Diimmel are highlighted in their “monster jam,” a melody of Metallica songs that give each member a chance to play songs that got us all into metal. Dimmel is given the opportunity to close out the melody with an essence-shattering drum solo.

The task of following such iconic bands is no small feat and couldn’t be handled better than by the mighty Halestorm. Siblings Lzzy and drummer Arejay Hale from Red Lion, Pennsylvania, have been playing songs and shows together since 1997. They cemented the line up by 2004 when Josh Smith on bass and Joe Hottinger on guitar joined the band.

When this tour started, Halestorm had just released their latest studio album “Vicious” to great reviews. The group recently released a new single, “Uncomfortable,” which grabbed enough attention to be nominated for the “Best Rock Performance”  Grammy. They might very well be at their biggest point as a band and it shows on stage.

While Halestorm have a much different show than In This Moment by stripping the stage of everything but a wall of lights and a drum riser fit for a king, they never come up short on showmanship and musical talent. They started the show with the new track “Vicious” and jumped into classics “Love Bites” and “I am the Fire,” allowing Lzzy and the guys to take fans right by the throat and soul and leave no choice but to feel the music.

The talent that pours from Lzzy is nothing short of amazing as she hits notes with her voice and guitar that leave you breathless. Halestorm is comprised of seasoned veterans who have reinvented themselves with each album while holding on to what makes them Halestorm. They mix old and new into the set including new tracks “Do Not Disturb,” “Black Vultures” and “Skulls” while making sure to give the fans “Love Bites,” “Amen” and “Freak Like Me.”

Always an audience favorite and not to be outdone, Arejay is given his monster drum solo including the “big sticks” before closing out the nonstop, high-energy set with ‘”Uncomfortable.”

Having the opportunity to catch all three bands several times, they have never disappointed. With every outing and concert, they have grown into inspirations for bands and fans alike.