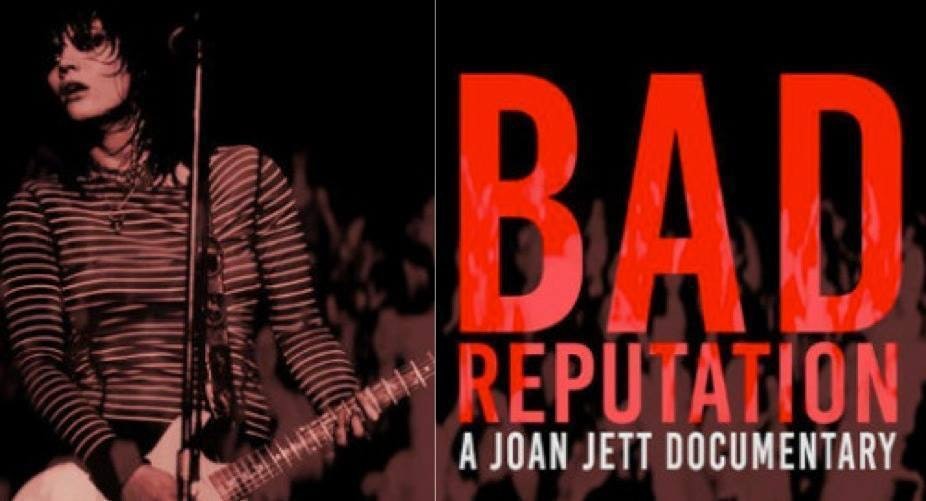 If you’re a music fan, you’ve probably noticed that a lot of noteworthy music documentaries were released in recent years. “Bad Reputation” is another one to add to the list. The movie saw a theatrical release in September of 2018, and it’s currently available for viewing online. “Bad Reputation” is a movie about Joan Jett.

She came of age during the decadent days of the Hollywood glitter-glam rock scene of the early and mid-1970s, which is where the story begins.

The film begins with Joan Jett speaking about wanting a guitar for her 13th birthday. Her parents found the request strange, yet they still bought the guitar. Joan wanted to play – she ran into opposition, being told “girls don’t play rock and roll.” Encountering resistance did not dampen her resolve. It seemed to add fuel to her fire.

Such a sentiment is at the center of “Bad Reputation,” a woman with her music and a dedication to persevere against all odds. The first half of the documentary were the most interesting, focused on The Runaways and the early days of Joan Jett & the Blackhearts.

Female groups had existed before, but The Runaways delivered a sonic crunch along with rebellious swagger, the type of raw power that was once almost exclusively associated with male groups.

The Runaways helped to change the perception of women in music, but it didn’t come easy.  Less than stellar reviews in Rolling Stone and other segments of the music press along with audience hostility still didn’t detour The Runaways.

Joan states her view that she found the reception to The Runaways in Los Angeles and America at large to be lackluster, so they shifted course and set out for England, in which they found greater acclaim and acceptance. Also during this time, Joan Jett took interest in the then burgeoning punk rock scene in London. Unbeknownst to me, Joan had recorded an early demo of “I Love Rock ‘n’ Roll” with Paul Cook and Steve Jones of the Sex Pistols.

It’s noted Joan left Los Angeles a glitter rocker and returned from England with more of a punk style. I’ve always thought of The Runaways as one of the bridges between glam and punk – their sound straddled both genres.

The international adventures of The Runaways didn’t end in England – they then ventured to Japan. If The Runaways found greater acceptance in England, they were practically exalted in the Land of the Rising Sun. The footage of The Runaways being greeted by ecstatic, screaming, mostly female, Japanese fans bares resemblance to the footage of the Beatles initial arrival America.

It was while in Japan things started to unravel for The Runaways, with the departure of bass player Jackie Fox and lead singer Cherie Currie. Lineup changes inevitably alter the auditory DNA of a band, and the changing of a lead singer is almost always the kiss of death.

With Currie gone, Jett took on dual duties of lead vocals and guitar. The Runaways came to end in 1979. In the wake of the implosion, Jett spiraled into heavy drinking to cope with the break up.

What I found the most interesting about “Bad Reputation” was the behind the scenes information I wasn’t privy to, but turned out to be crucial elements.

One of the most seemingly crucial components of the emergence of Joan Jett & the Blackhearts was linking up with Kenny Laguna. He was a producer and record impresario who had worked his way up in the record business through the years. He comes off like a man with strong business acumen and musical instinct, regarding what makes for a “hit.”

He cut his teeth on and made his name in the world of Bubblegum pop music of the 1960s, developing industry ears along the way. The collaboration tempered the sound of Joan’s rock rawness with a greater sense of melody, without removing the bite.

The connection between punk rock and Bubblegum music is briefly examined in the film – Don Bolles, drummer for the Germs, and later 45 Grave, astutely states there is a shared musical DNA between the Bubblegum of the ’60s and the punk rock of the ’70s. There are noticeable lines of connection from The Archies and the Raspberries to and the Ramones and The Damned.

It’s a connection many wouldn’t catch, especially during the initial punk explosion, due to the genre’s perceived association with anger and outrageous aesthetics, but if you take note of the musical structure of many of the songs by punk bands of the ’70s, you can hear the relationship to some of the pop music of earlier decades, just under layers of loud, distorted guitars.

The pairing of Joan Jett and Kenny Laguna led to some of her most fruitful days. “I Love Rock & Roll” shot up the charts to number one in 1982, propelled by the song’s video rotation on MTV.

I knew the song was popular, but I had no idea it charted so high.

The best documentaries offer surprises, expanding your knowledge, presenting information you weren’t previously privy to. With these sorts of documentaries a combination of archival footage intertwined with newer talking head interview footage is par for the course. Interview footage from members of the Blackhearts and Cherie Currie wasn’t surprising.

However, I was more than a little surprised seeing footage of Ian MacKaye (Minor Threat, Fugazi, Dischord Records) and Kathleen Hanna (Bikini Kill). I didn’t expect to see such underground music icons interviewed in the film.

I always associated Joan Jett with mainstream rock because of the success of “I Love Rock ‘n’ Roll.” But, in all actuality, Jett had her feet in multiple musical milieus. She landed chart hits and moved from playing clubs to stadiums, but Blackheart Records started as an independent operation.

Some of the most poignant moments were delivered via the insight of those outside of Joan’s direct orbit, talking about her influence and impact. Kathleen Hanna was the most ecstatic and elated when talking about being inspired by Jett’s music

I was somewhat surprised in hearing Hanna express such admiration – because I don’t hear a strong sonic similarity between the music of Joan Jett and Bikini Kill.

Then I thought the admiration is about more than direct musical influence – it’s related to the idea of Jett as a musical feminist icon, bringing a sound, energy and aggressive presence that was virtually unheard of coming from a woman in the early ’80s.

“Bad Reputation” ends on a high note, that Joan Jett is still rocking and doing things her way.

“Bad Reputation” is available on DVD or online via Amazon and iTunes.