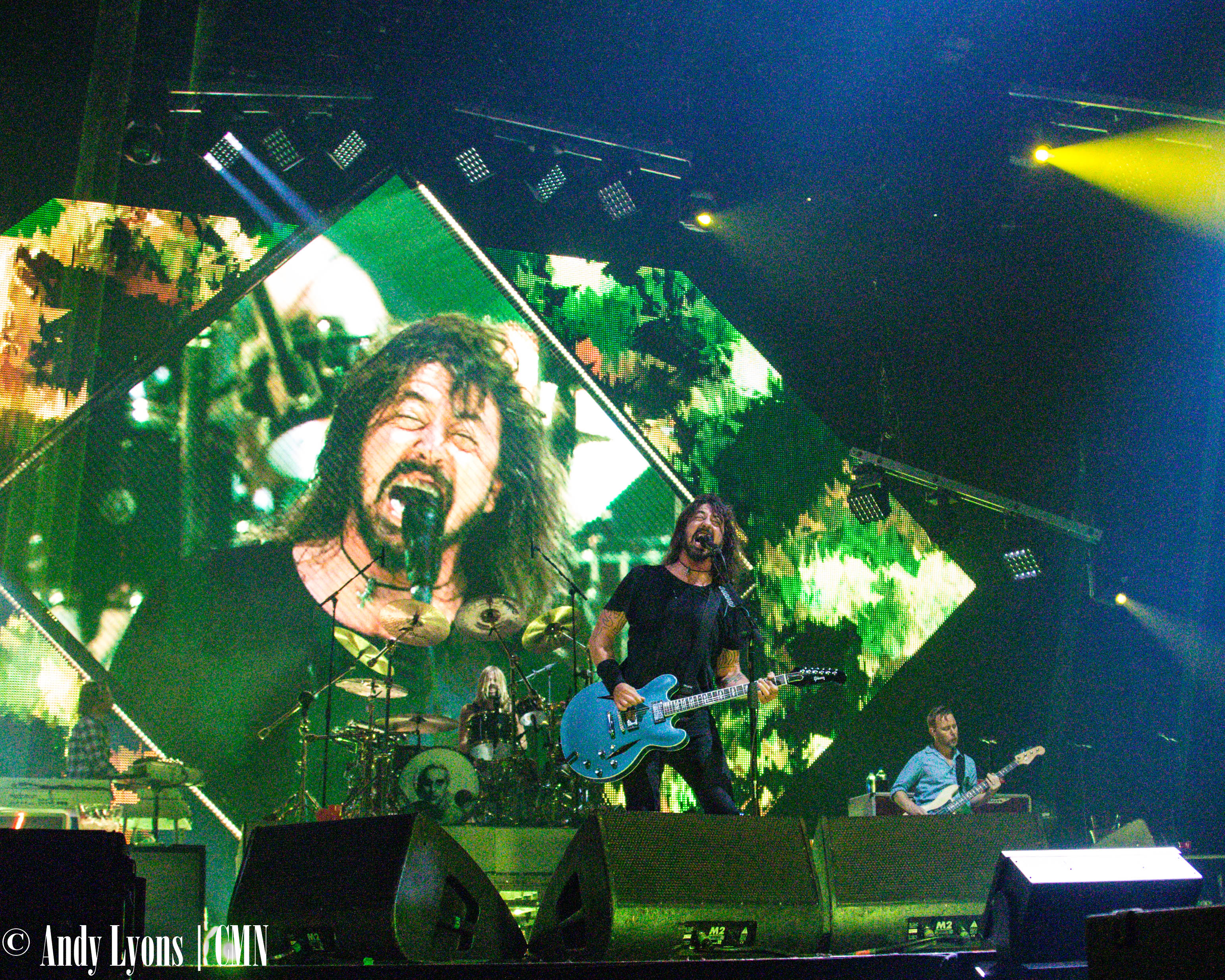 Foo Fighters have built a rich history with fans in Kansas City over the years. A little more than three years ago, the group famously rickrolled Westboro Baptist Church picketers in front of the Sprint Center before playing a nearly three hour set while frontman Dave Grohl sat atop a guitar throne. At the conclusion of that set, Grohl announced to the crowd the group would be taking a hiatus but would be back soon.

It came as a complete surprise last summer when the group announced a new album and world tour, planning to hit the road again to support “Concrete and Gold.” With a late fall stop back at the Sprint Center, and this time with both legs, Grohl & Co. again played a set to remember.

The group played to a nearly capacity crowd for another three hour set that could easily have doubled for a greatest hits album. The Foo set the tone early by opening with tracks “Run” and “The Sky is a Neighborhood,” two songs off “Concrete and Gold” that hit heavy and gave Grohl the chance to put the crowd on their heels – he was a sonic frenzy behind the guitar and vocals and didn’t let up.

Grohl is a master showman, and proved it time and again throughout the set. While playing Foo classics like “Times Like These” and “My Hero” Grohl threw the vocals to the crowd and the entirety of the Sprint Center answered. Hearing more than 15,000 fans singing “there goes my hero” is an instant rush of euphoria, the primal energy of the show coming to bear.

Late in the set, while he worked the crowd, Grohl invited a 10-year-old boy named Collier Cash Rule on stage after the boy yelled “I want to play guitar” from his seat near the front. Grohl handed Rule his guitar and asked the boy if he knew any songs only to be floored when Rule played through Metallica’s “Enter Sandman.” After a few minutes of Metallica tracks, Grohl gave Rule his guitar as he walked off stage.

The show also included some fun covers while Grohl introduced the rest of the band. While introducing guitarist Chris Shiflett, keyboardist Rami Jaffee, and bass player Nate Mendel the group played through a medley featuring a guitar solo, bit of “Another One Bites the Dust,” and a keyboard solo. The medley evolved while Grohl introduced guitarist Pat Smear. The group played the music to John Lennon’s “Imagine” while Grohl asked, and made sure, the crowd knew the words to the song. And then he sang the lyrics to Van Halen’s “Jump.” The final cover saw drummer Taylor Hawkins swap places with Grohl for Queen’s “Under Pressure,” with Hawkins doing a surprisingly good job on vocals. The song got a bit of an extra applause when it ended as Grohl pounded out the opening drums to Nirvana’s “Smells Like Teen Spirit.”

The group managed to turn it up another notch for their encore – which included Rule hitting the stage. While playing “Dirty Water” a backing-vocal trio added to the etherealness of the track which included a Hawkins delivering a solo late in the song. Foo Fighters closed their set with “Everlong,” again with the crowd challenging Grohl for the louder vocals. The song concluded a night that felt pure, despite all of Grohl’s antics. The show never felt forced and the interaction between the group and the crowd genuine. It was another example of how a rock show can bring people from all walks of live together, even if it means Grohl is just “doing his job.”