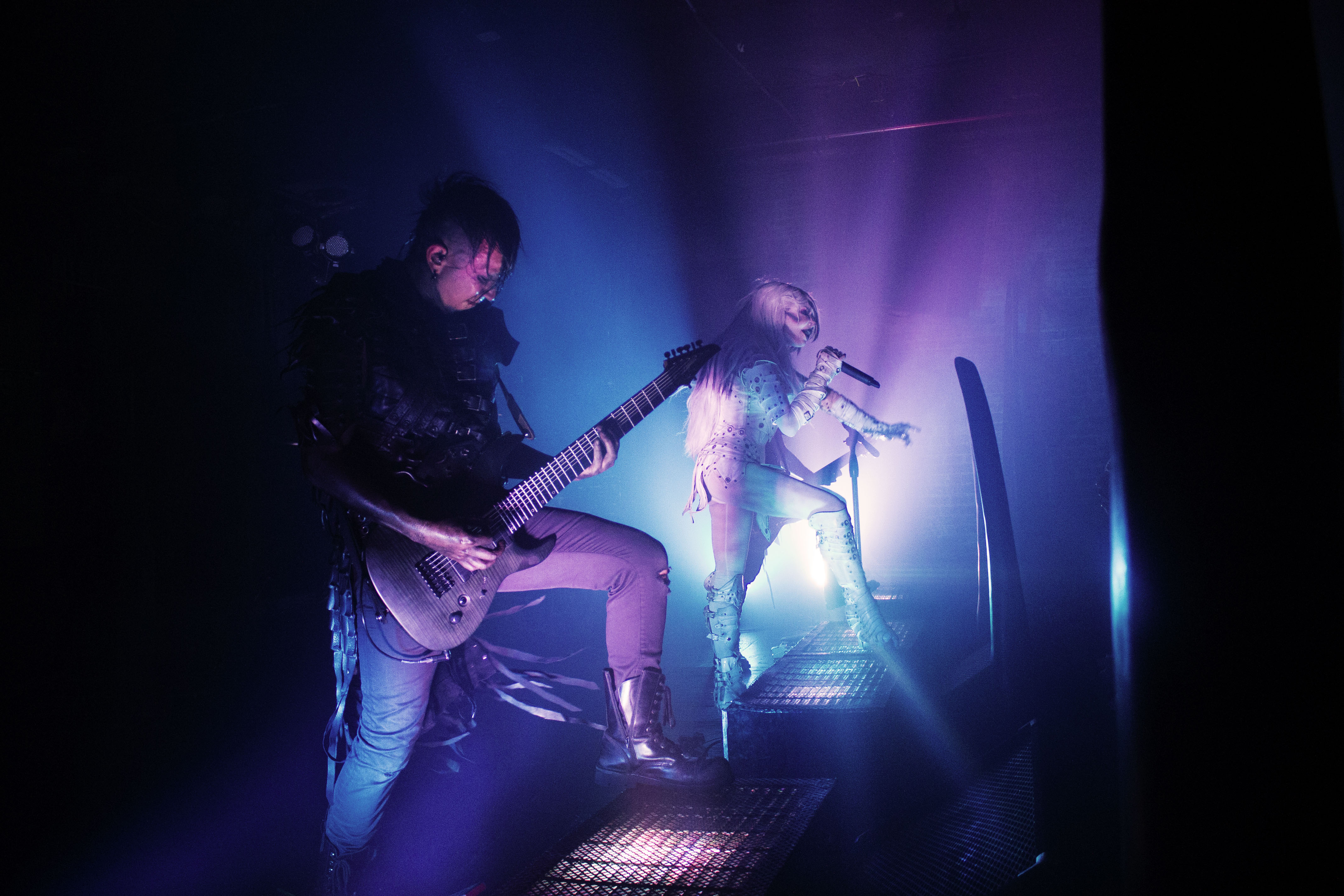 The 2018 Autumn Soul Collections Tour featuring September Mourning wrapped up its seven-week run in Springfield, Mo., at the Outland Ballroom on Tuesday, Oct. 9. Playing host and opening the show were local bands Xeros and Artillary.

“It’s been great seeing the fans but I’m ready for my bed ” September, aka Emily Lazar, said of the last night on tour while talking with CMN before the show. She was still excited from a couple nights earlier when she was able to enjoy seeing tour-mate Jonathan Davis in El Paso.

Lazar has become familiar with Springfield as it is a regular stop for her.

“Every time I come here I get that pizza,” she said, giving props to Pappos Pizza.

September Mourning dropped a video for new single “Empire” on Friday Oct. 12. “Empire” is the first track released in preparation of “The Trinity” Vol. 3 in the September Mourning comic book series. The video is full of haunting selfies that fans sent in representing souls that September will save and is a great continuation of the story and music.

“Trinity” is due out digitally Oct. 17 through Comicsology and Image Comics.

“I am a huge fan of Mark Sylvester and we are very lucky to have them aboard,” Lazar said of the new pairing with Image Comics.

The graphic novel, which will include all four volumes, will be released Jan. 16.

Lazar has her roots in TnA wrestling, which is when CMN first heard about September Mourning.

“I was writing demos in 2012 and the wrestling company really liked it,” she said. The song was “Before the Fall,” one of September’s earliest hits. “They wanted a visual so we did a video.”

CMN asked for some storyline spoilers, but September wouldn’t let any slip.

“The music follows the storyline,” she said of the influence for writing new music.

Kicking off the night of music was local band Xeros. Lead vocalist and guitar player Jaymes Peralta has had a few incarnations of his music. After a long stretch of shows honing their cohesion, he said they are ready to get in the studio in the new year and lay down some tracks.

They opened the show with the energy fans have come to expect from a Xeros show. Joining Peralta on stage were Nathan Vest on bass, Jason Dawson on guitars and Layton Flatt on drums.

Xeros hit the stage and wasted no time dialing up the energy and warming up the crowd with fast-paced, catchy tunes. They have zeroed in their sound and will have no doubt a great album to release to the masses hopefully in early 2019.

Next to attack the stage was another local band, Artillary. The group is comprised of brothers Micheal on drums and Daniel Choate on lead guitar, Tyler Lynch on vocals, Anthony Gavazzi and Rick Barrett on guitars and David Clark on bass.

It’s not too often anymore you see a band with four guitars, but Artillary understands the volume and fullness it gives a sound and they harness it with a great gusto.

Artillary knows how to capture the energy of the stage and bring it to life while harnessing aspects of all genres of music. They do a great job of blending styles and interacting with the crowd. The group was riding on its newest single “Accept the Fall,” out now on streaming services. It’s a catchy number that shows the band’s influences and direction and would be a great fit on any playlist.

Be on the lookout for big things from these guys as they have good chunk with a balance of “pretty metal.”

“If I can get a fan to forget about everything around them and be a part of that for about an hour, I’ve done a good job,” September professed when asked about what she wants to give in a show.

So as the time came for September Mourning and her reapers to take the stage, fans were already sucked into her world with an elaborate stage setup that looked to be right from the pages of their comic books.

The screen starts with scenes of the comic and an eerie voice narrates the story as images of duels with fate and the saving of souls flash on the screen. The reapers enter first in their dark battle-ready attire as September, in her glorious heroine look, takes to the mic and the story begins.

They open the show with “Angels to Dust” and immediately pull you into their world. While this is the first outing for some of these reapers, it didn’t show in the work. September Mourning is of course September, aka Lazar, on vocals, Riven and Wraith on guitars and Stitch on drums.

They bring a softer, haunting metal sound in their music and their cover of the 1961 Ben E. King hit “Stand by Me” is a perfect example as they breathe life into the track that will give you chills, the best cover of the track.

Absorbing the crowd into their world with ease and helping fans forget the real is the band’s forte. After debuting her new track “Empire” to great reaction, September closed the night with the ominous sing-along track “Children of Fate” and eased fans back into the real.

Making sure as always to head straight to the merch booth to greet fans after the set, September proves along with all her interaction on the vast media platforms that she is of the fans and grateful for their devotion. Many bands can put on a great set, and September Mourning is great at harnessing all the powers of a “show” and attacking all the senses to help fans feel part of that world.

“We just want to take them into a world,” Lazar told CMN of what she hopes fans take away from her shows. “It’s like going to Harry Potter, you join this world.”