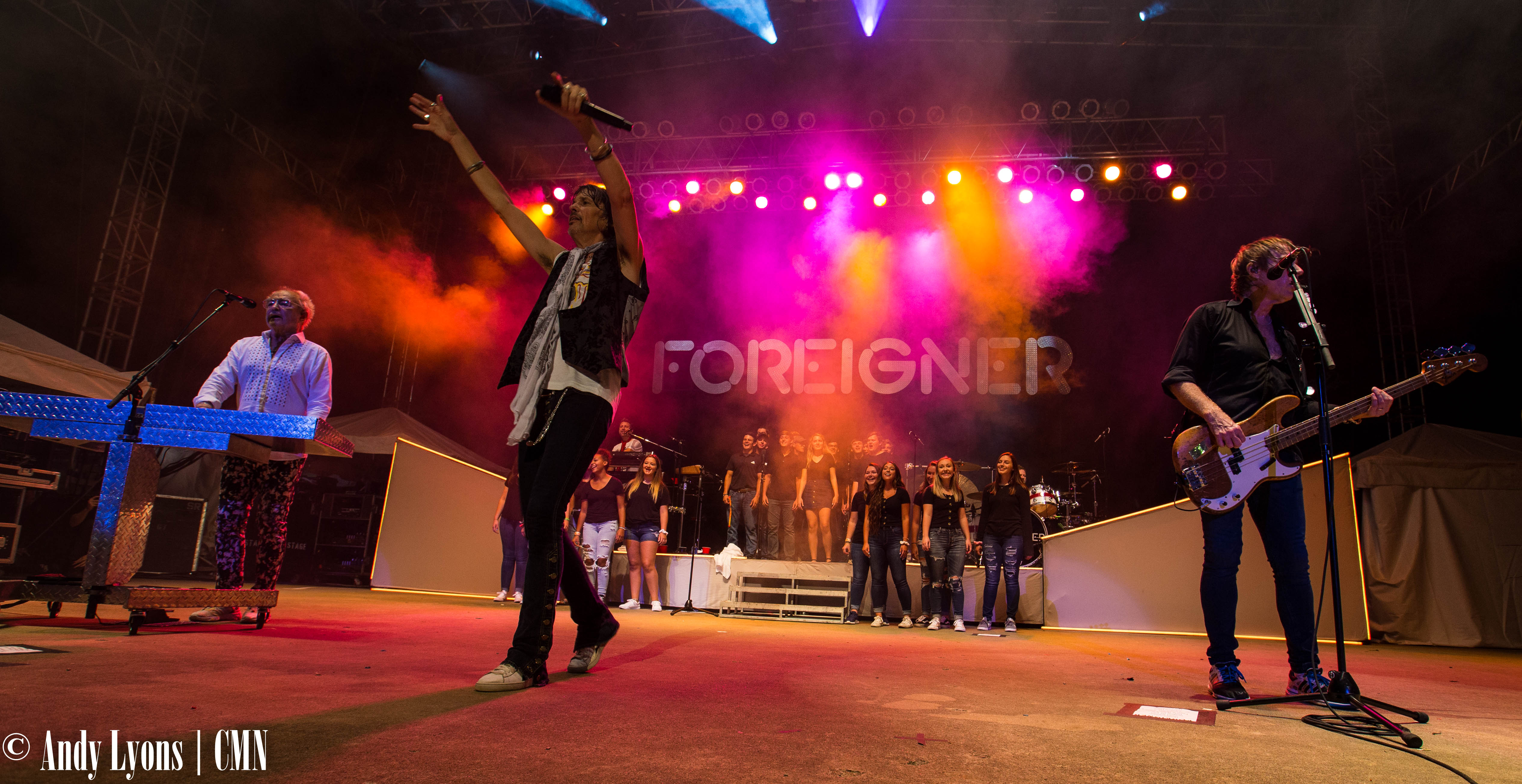 Classic rock always draws a big crowd at the Missouri State Fair, and Friday night was no exception with legends Foreigner taking the stage at the Pepsi Grandstand with support from Night Ranger. The massive appeal of a group like Foreigner meant a mixed crowd as multiple generations filtered in for an epic singalong.

The heat and humidity Missouri is known for broke for the show and beers flowed freely throughout the night. Foreigner frontman Kelly Hansen wasted no time getting the crowd revved up. His energy matched that of many a rocker half his age – and he never stopped throughout the set. Hansen’s dancing, crooning, and giving attention to the crowd grabbed the attention of fans all over the Pepsi Grandstand. While the band played a jam during “Cold as Ice,” Hansen hopped down into the photo pit and high fived fans across the front row, stopping in the middle to hop up on the railing and beckon in more cheers.

After playing “Dirty White Boy,” Hansen introduced guitarist Mick Jones. Jones is the last founding member still in the band although he had been sidelined after aortoiliac bypass surgery in 2012. He took the stage to a massive applause. He played some guitar on “Feels Like The First Time” and had fans clapping over their heads to the beat of the song.

After a drum and keyboard solo, the group was rejoined by Jones for “Juke Box Hero” that melded into a jam session with Jones playing a blistering solo toward the end. The crowd sang the track louder than Hansen, with their voices echoing off the roof of the grandstand.

Late in the set, the group was joined on stage by the Smith-Cotton High School show choir for “I Want To Know What Love Is.” Members filed on stage to a riser that included drummer Chris Frazier on one side and keyboardist Michael Bluestein on the other. The pairing of the choir and a grandstand full of singing fans made for an awesome effect for those caught in the middle. As the song concluded, Hansen plugged The Grammy Foundation, a charity Foreigner promotes to bring music programs to schools just like Smith-Cotton and gave them a shout out for joining them on stage.

After the performance, choir director Anna Wooderson reflected on what it was like to be approached by a group as legendary as Foreigner to perform on stage at the Fair.

“I listened to the voicemail approximately five times before I believed that it was really legitimate,” she told CMN via email. “I was so excited that I could hardly stand it. The next morning, I plugged my phone into the speaker system and let the students hear the actual voicemail inviting them to be the backup choir for Foreigner. They were shocked and excited! Many knew the band and their music. While some did not recognize the band name immediately, I played a few of their greatest hits and then they knew. Several contacted their parents immediately knowing that they would be thrilled!”

Wooderson said the preparation for the show was an opportunity to learn what it’s like to be in the entertainment business firsthand.

“There was no sheet music, which we read and utilize in our department,” she said. “However, it was a good ‘real life’ experience for the students to see that not all music performance opportunities provide traditional means for preparation. They handled it like pros. They rehearsed with recordings, watched performances of other choirs to become very familiar with what would be expected and were reminded to use the skills that they have learned through their experiences in show choir.”

The Missouri State Fair is practically a holiday in Sedalia. It brings a wide range of people together and does a lot of good for the community. Wooderson said the performance would be something her students remember for the rest of their lives.

“This was an opportunity of a lifetime for these musicians to perform with such a level of professional musicians but even better, on their ‘home court’ with the entire community of Sedalia showing up to support them and take pride in their performance, as well,” she said.

Night Ranger got the show started with guitars screaming. Fans immediately hopped to their feet to take in the blistering guitar work and cheered all the louder when the group teased the intro to the Guns N Roses hit “Sweet Child O’ Mine,” as well as covers of Alice Cooper’s “School’s Out” and the legendary Ozzy Osbourne song “Crazy Train.”

The group concluded their legendary self-titled song with an all-members drum solo where each person grabs sticks and bangs on different parts of the drumset to a thunderous applause. The group inspired their first singalong with “Sister Christian.” The group began the song with drummer Kelly Keagy getting the crowd ramped up before they joined on vocals.

Classic rock has transcended generations and become much more than just songs from an era 40 years ago. The songs that were staples in the ‘70s have become anthems sung in bars and pubs for decades, bringing people together through lyrics they didn’t know they memorized and music easy to dance to. Foreigner and Night Ranger did just that Friday night at the Missouri State Fair – gave people across three or four generations an excuse to come together for a night of singing their lungs out and swaying with the people next to them.