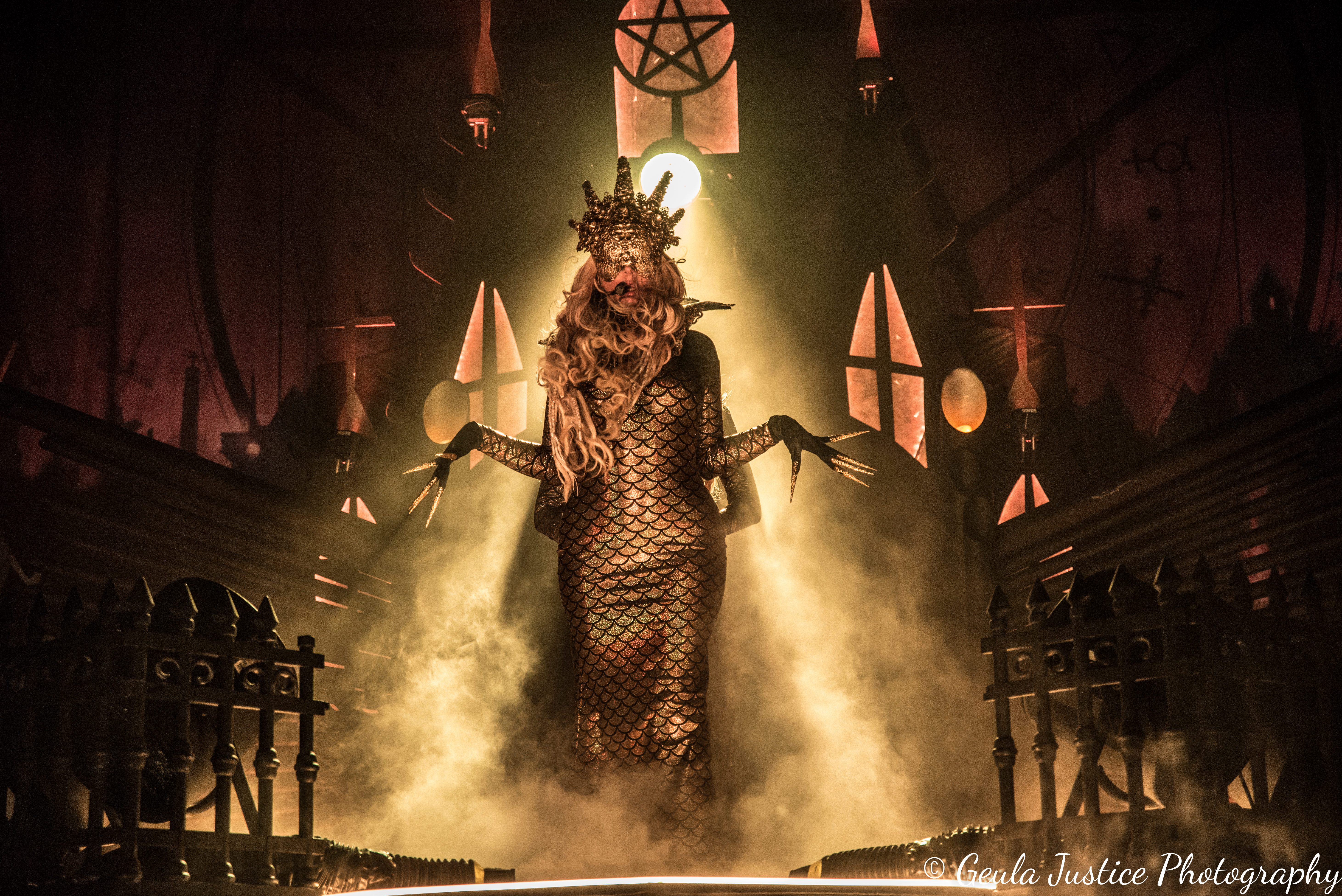 In This Moment, Sevendust kick off Memorial Day weekend

Memorial Day weekend kicked off with the mother of all shows as In This Moment with special guests Sevendust, Light The Torch and HYDE played for a sold-out crowd at the Arvest Bank Theater at the Midland in Kansas City, Missouri.

Some of the earliest fans were there for the opener, HYDE. As one of Japan’s biggest rock stars, HYDE had fans who traveled from Japan for the soul purpose of this show. Their energy, excitement and devotion for their favorite rockstar had all the other early birds eager for HYDE’s set.

HYDE, born Takarai Hideto in Wakayama, Japan, is no rookie to entertainment. He has had success dating back to the early 2000s with his solo work, early work with L’Arc-en-Cie and then later with the Vamps, returning to solo work in 2018. Hyde has recorded more than 300 songs with 60 of them breaking the “Oricon,” also known as the Japanese Billboard Charts, top 10.

With a very unique look, right from the start HYDE make a statement, from the guitar player’s electronic goggles, the keyboard player’s flashing “DAMNED” goggles and the Phantom of the Opera-meets-Japanese-anime look of Hyde. The stage look could be best described as a blacklight poster come to life. Extenuated by Hyde’s glowing blue eyes, it definitely set the mood for their music.

There was an almost different cadence and song structure to his music that felt and sounded refreshing. With a fierce performance, clean vocals and catchy tracks, it seems HYDE will surely take America by storm with his latest album release, “Anti.”

Formerly known as Devil You Know, the band announced on Facebook in 2017, with no explanation, their name change to Light The Torch and in March 2018 released their first album, “Revival,” under that moniker.

Light the Torch is a stripped-down band with no bells or whistles, just a simple, in-your-face metal band. It is a perfect avenue for highlighting the powerful and intoxicating vocals of Jones and the hard-hitting sound of “Scuzz.” Light The Torch won over fans instantly with tracks from “Revival.” Unfortunately, just as Light the Torch really had the crowd headbanging and horn-throwing, Mother Nature had different plans. A county-wide tornado warning was issued and forced a momentary stop of the show and evacuation of the top two floors of the Midland, thus ending Light the Torch’s set as to keep the remaining bands on time.

Next on the bill was co-headliner and Atlanta, Georgia-born band Sevendust.

Sevendust have been making fans since its 1997 debut self-titled album when Vince “The Boss” Hornsby on bass, Morgon Rose on drums, and John Connolly on guitar came together with fellow guitar-player Clint Lowery and Lajon Witherspoon on vocals.

Kansas City is always an extra special show for vocalist Witherspoon, who calls it home. It’s no doubt his passion and performance bring out the best in the band and the fans.

Sevendust wasted no time getting into the madness with songs like “Dirty” off the most recent release, “All I See is War,” to the songs that take old-school fans back like “Bitch.” Sevendust  never have trouble getting a crowd bouncing and dancing and the KC fans were no exception.

Always bringing new life to every track and every show, Hornsby is a force on the bass and does his very best to give a special glance to as many fans as possible with his signature point and nod. Rocking on percussion, Rose is so much fun to watch and a master of the stick tricks while engaging with the crowd. Never to be outdone are the battling guitars of Connolly and Lowery as they play off each other and the crowd.

When you put all the forces together and bring it to the live stage with a simple light and smoke show, it makes for an unforgettable performance. Witherspoon made it extra special, inviting the band members’ children on stage to celebrate the music with a sold-out crowd.

The crowd exploded in cheers when fans saw the new look of the In This Moment stage: an almost Tim Burton-esque, “Nightmare Before Christmas”-inspired wonderland of images and symbols that will take your breath away. It included a grand pipe organ-look amidst the giant pentagram adorned with Wiccan-style symbols and a giant crescent moon-topped cottage that just felt welcoming. Lifted in the sides with their own cottages of symbols were Kent Dimmel on drums and Chris Howorth on guitar.

The set started with Travis Johnson on bass to the left and Randy Weitzel to the right, both standing statuesque in their gowns and masks. Eyes were drawn, of course, to center stage as Maria Brink on vocals towered over the stage with her “Blood goddesses” surrounding her in long gowns with ceremonial drums.

The drums began the beat of the opening track, an amazing rendition of The Steve Miller Band’s hit “Fly Like An Eagle.” (One could assume it will be a track on In This Moment’s new album, “Mother,” due out this year.) It could be considered one of the most theatrical shows to ever grace a rock stage, stimulating all the senses.

In This Moment have a vast library of songs to choose from and while they don’t go all the way back, they perform headbanging favorites like “Adrenalize,” mood-shakers “Roots” and “Natural Born Sinner,” and the somber and heart-wrenching “Lay Your Gun Down.”

While they have always highlighted the men of ITM, the “Monster Jam/Journey” mashup sing-along was a refreshing twist added to the show. Some see the men as overshadowed by Maria, but they are forces on the stage and like any good band they all highlight each other.

In This Moment saved some of the best for last with bangers like “Big Bad Wolf,” “Blood” and the encore “Whore,” during which Maria climbs a giant alter with the word “whore,” an acronym for Woman Honoring Others Rising Eternal. It’s a song of love and strength born of hate as she has the goddesses at her base in gallows of shame, a truly moving visual.

It wouldn’t be an ITM show without balloons and confetti, and they go all out this year, closing the show like the party it is.

In This Moment performances are unmatched in creativity and this concert could not have been highlighted any better than with the addition of Sevendust, Hyde and Light the Torch.