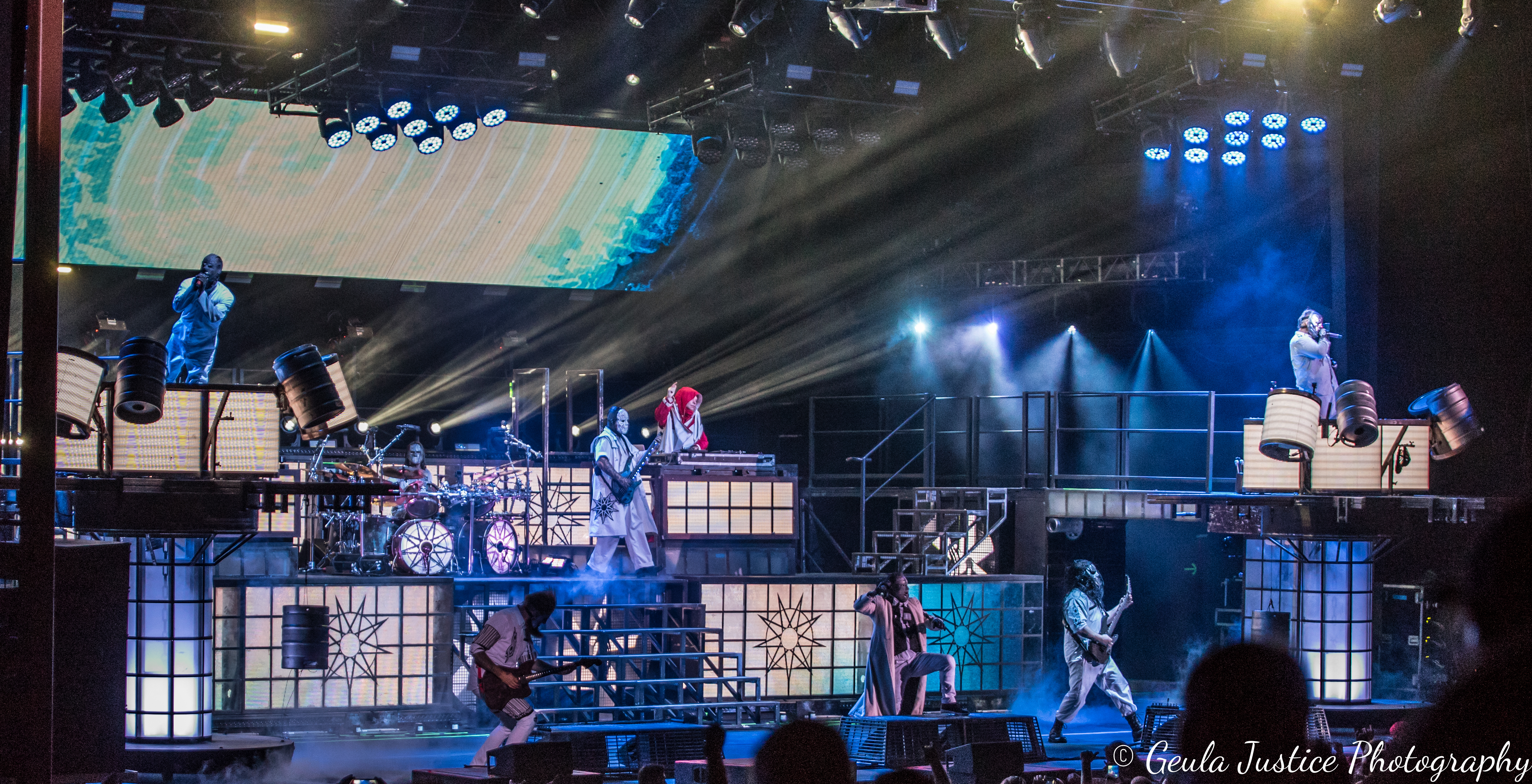 The Knotfest Roadshow featuring Slipknot, Volbeat, Gojira, and Behemoth made a stop Saturday, Aug. 17 at the Providence Amphitheater in Bonner Springs, Kansas. Perhaps one of the most anticipated tours of the summer, Slipknot returns to the circuit with a bang and in support of their latest release and already chart-topping album, “We Are Not Your Kind.”

Starting off an early show was the Poland-based black metal and blasphemy-known band Behemoth. Formed in 1991, Behemoth is no stranger to the metal scene and credited with starting their own genre of music throughout Poland. They are on tour in support of their late 2018 release and 11th studio album, “I Loved You at Your Darkest.”

Kicking off the show in their almost demonically-painted white faces were Adam “Nergal” Darski on lead vocals and guitars, Zbigniew “Inferno” Promiński on drums and Tomasz “Orion” Wróblewski on bass and backing vocals. Bringing nothing but fast-paced death metal, Behemoth have been at it long enough to know how to get a crowd going, and that they did. Their special effects, fire and lights were somewhat wasted by the light of day but their setlist of heavy growling vocals and thrash riffs were unaffected and well received by the crowd.

Next on the bill was France-based extreme metal act Gojira. Formed in 1996 and taking their current name in 2001, Gojira has become a powerhouse in the heavy metal world and with their last release, “Magma,” in 2016 garnering Grammy nods show no sign of slowing down. Gojira consists of Joe Duplantier on lead vocals and rhythm guitar, Mario Duplantier on drums and backing vocals, Christian Andreu on lead guitar, and Jean-Michel Labadie on bass.

Gojira were a fan favorite and had the crowd on board from the start of their blistering set. A highlight was Duplantier on drums because his style and energy were a show in himself while also throwing more drumsticks to the crowd than any other drummer I have ever seen. Supporting big acts such as Slipknot and Volbeat doesn’t come easy but Gojira proved to be up to the task with their library of unorthodox structures and writing styles brought to life in their live show. A so-called death metal band, Gojira have harnessed the ability to incorporate many influences into their sound while staying technically pure. Their show was lacking big bells and whistles but they more than made up for it with a powerful sound.

In main support on this fest of foreign-born metal opening acts is maybe one of the most original sounding metal bands to make it big in the last few years: the Copenhagen-born Volbeat. What could be called a rockabilly metal band, Volbeat have struck a nerve with North American audiences and airwaves with their clean vocals sung in a most unique way by vocalist Michael Poulsen. Joining him with their upbeat sound are Jon Larsen on drums, Rob Caggiano on guitar and Kaspar Boye Larsen on bass.

You can tell in Volbeat’s performance and music style that while the music comes hard and heavy, the feeling is simple: Volbeat is a party, good-time metal band. With all their hits including “Seal the Deal,” “Still Counting” and “A Warrior’s Call” packed into their set, there is no way not to dance and throw your horns and the crowd was feeling every bit of Volbeat’s energy. In support of the August release of their seventh studio album, “Rewind, Replay, Rebound,” Volbeat seems to be invigorated with new sounds and influences.

Finally it was time for what the almost sold-out crowd had been waiting for: Slipknot. As their giant banner covered the stage for their set-up the crowd exploded in cheers. The hiatus from touring had no effect on Slipknot’s fan base. The Iowa-based band’s sixth album and first release in five years proves the power of metal music as it went straight to No. 1 on the Billboard debut charts in the U.S and in Europe, knocking off pop artist powerhouses Ed Sheeren and Drake to take that top spot.

Slipknot jumped into their first track, “People=Shit,” as fans took in the massive stage giving percussionists front top-floor risers, mix masters second-level moving sidewalks and the frontmen a full stage of lights, fire and expressions of angst and passion.

Taylor had no issues getting the crowd to follow his every vibe as the band ran through hits such as “(sic),” “Before I Forget” and “The Heretic Anthem.” Big-time hits and fan favorites “Psychosocial,” “The Devil and I,” “Sulfur” and, of course, closing out the show with “Duality” made the set.

Known for their live show with the dark-masked members giving off psychotic energy and horror imagery, Slipknot have harnessed a heartbeat in the metal world and are a must-see live band.

The Slipknot roadshow runs through the rest of the year and the album “We Are Not Your Kind” is available on all platforms.