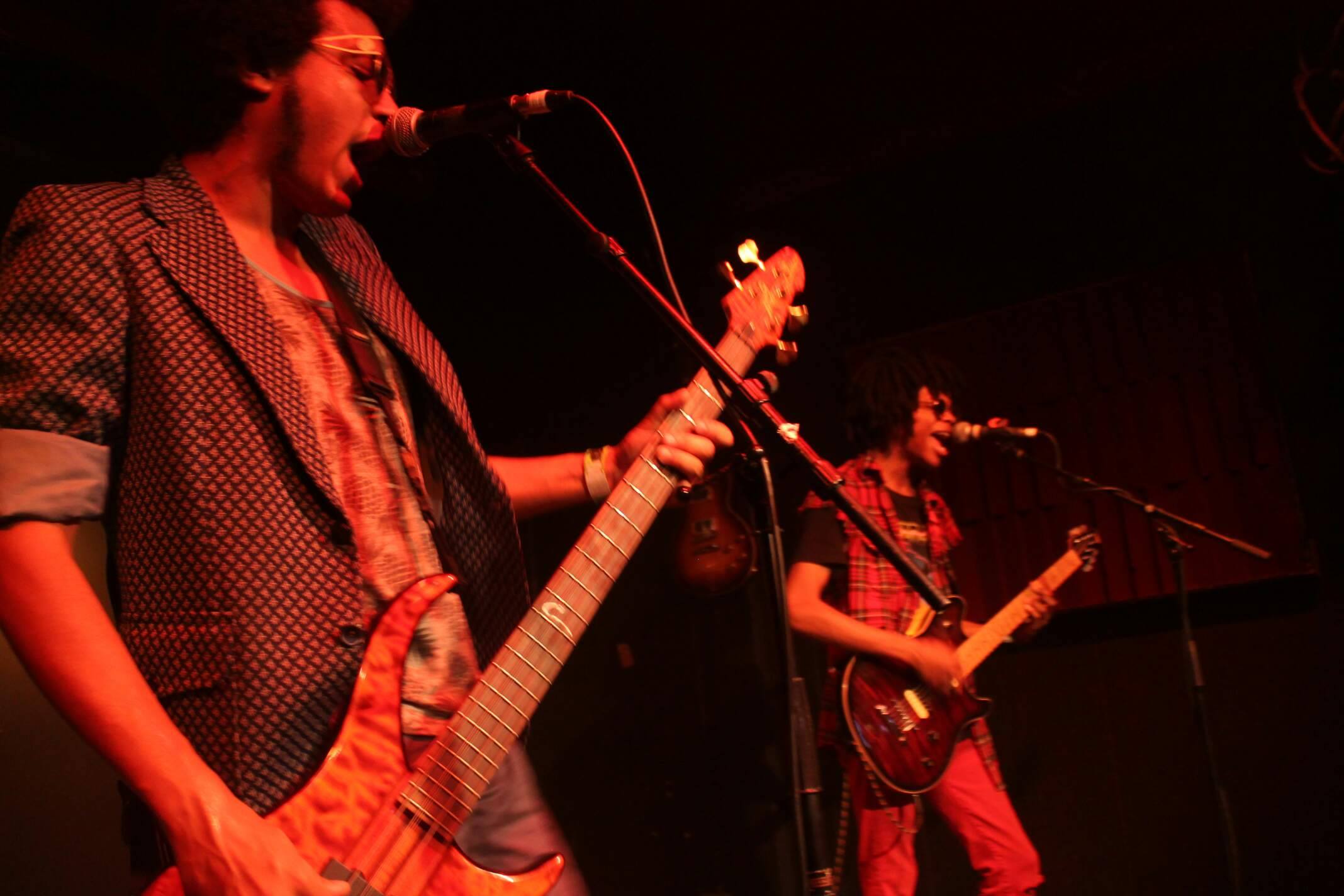 The story of the punk rock band Radkey is uncommon, unconventional, and anything but typical.  Sandwiched somewhere between the Ramones, the Descendents, Nirvana and The Partridge Family, there is Radkey.

The beginnings of the band started when three brothers, Dee Radke, Isaiah Radke and Solomon Radke, got into the music of their dad’s record collection: Nirvana, Green Day, Weezer, Led Zepellin and the Ramones. They were so inspired by the music they decided to form their own band, which came into existence in 2010.

The life of a teenage punk band starting out is usually removed from the limelight. For many young bands, it will take a few years before reaching a big stage, with no guarantee of getting to such a point and expanding beyond the garage and the backyard. In the meantime, most teen punk bands are typically relegated to basement parties and rented halls.

That wasn’t the case for Radkey.

Their first show was opening for Fishbone in 2011 in Kansas City. Things grew from there. Landing on the same bill with the West Coast ska/funk legends was a matter of luck and circumstances.

“A band actually dropped off the bill, so our dad hit up the promoter and asked if we could hop on,” Isaiah Radke said. “It was such a big show to start off with to where it made it to where you didn’t really want to stop trying. Being a young band and having something like that on your resume really helped letting people know you’re a real band, and we were able to get a lot of real gigs from that.”

Connecting with more known bands started happening as Radkey toured and recorded more. They played a one-day festival in Tokyo, Japan (PUNKSPRING 2014), sharing a bill with Bad Religion, and opened for The Offspring, as well as the Descendents. Bill Stevenson, the drummer for the Descendents and at one point Black Flag, playing drums on the monumental “My War” album, produced Radkey’s “Delicious Rock Noise” album.

It’s not surprising Radkey would click with members of the Descendents. Radkey are the modern inheritors of the punk of earlier generations — it’s a musical succession.

One can clearly hear the influences from previous eras in Radkey’s sound, punk rock and alternative rock from the ’70s, ’80s and ’90s, stirred and blended. Radkey strikes a perfect balance with their music, musical aggression meets infectious melody. It’s not pop-punk nor is it hardcore.

It’s something upbeat and hard-driving that you can also dance to. Most of their music isn’t heavy on socio-political commentary. The themes of their songs seem to capture life as it happens, boredom, romance, finding heroes, etc.

“P.A.W.” (featured on “No Strange Cats” EP) is a song that deals with the subject of redlining along with encountering race-based misconceptions. The song builds with subtle feedback and an ominous bass line in the opening, then works its way to the exploding refrain, “They appear to be, so scared of me.”

The lyrics come from a personal experience in the lives of the members of Radkey.

“What really kind of sparked the lyrics was one time when Solomon and I were walking from Chipotle, and we’re just walking back home and this lady was pretty much running away from us. She crossed the street during a red no crossing sign to get far away from us,” Isaiah Radke said. “It’s like dude, we got burritos. What do you think’s going to happen? It’s daylight, so it’s like that’s the ‘why are people scared of me’ kind of thing.”

If Radkey has experienced ostracization in public spaces, they’re fully accepted at Rose Music Hall in Columbia, Missouri. They took to Rose’s stage Aug. 8 ready to rock with local powerhouse The Many Colored Death also on the bill. About 100 or so diehard fans had shown up on a Thursday night, a turnout size similar to the last time Radkey played Columbia back in March.

The band played in Columbia on their first tour in 2013 and they’ve been coming back ever since.

Radkey’s stage show is entrenched in youthful, electric exuberance. Not only are the members proficient in playing their instruments, but their stage presence is so alive and on fire. Radkey gives it their all on stage, and the gathered crowd responds with wild delight.

All of the members of Radkey radiate onstage charisma. Solomon’s completely on time with the drumming, Dee presents an understated, confident cool combined with technical proficiency as he moves between lead vocals and lead guitar, while Isaiah came off as energized beyond belief, in a state of almost constant motion from start to finish, gallops, skips across the stage, leaps, hips swaying.

They started with “Song of Solomon.” The song works perfectly as a jumpstart to their live show, a mid-tempo song with stop and start breaks with its intro. It’s a song that showcases the fortitude of Dee’s vocals, a rich baritone voice that at times sounds seemingly operatic in the way his voice bellows out into the air. In a live environment, these vocals hit so hard.

He said he developed his vocal style on his own sans formal training while singing in his room.

“There’s not much to it. I always get compared to Danzig, I get compared to Jim Morrison. I think it’s mostly because when I sing I kind of croon and sing in a lower register,” Dee Radke said.

They finished their official set with “Romance Dawn” and ended the encore with their cover of “Teen Titans,” which got a spirited response from the audience. Radkey’s night in Columbia was the start of a series of shows, hitting many locales in Missouri. After Columbia was St. Louis then heading down to Springfield after that.

Isaiah Radke said he wants to see Radkey continue to record more albums, play shows and continue to have people come to see them.