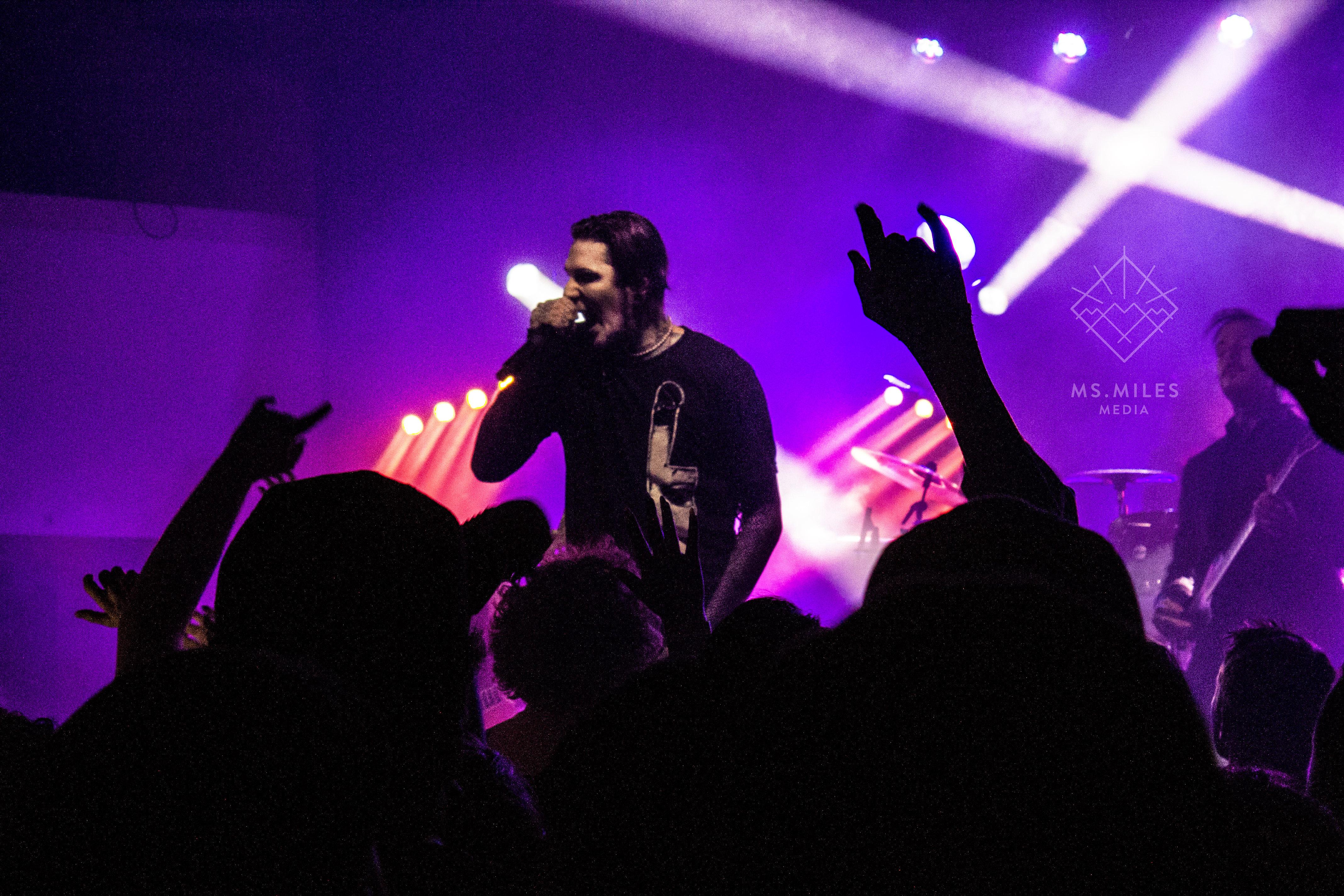 The Spring Invasion Tour featuring Motionless in White and Atreyu did just that and invaded The Complex in Springfield, Mo. May 2 with special guest Fear My Name.

The Complex, despite local rumors and controversies about possible new owners, has not stopped booking shows and making upgrades to the venue with new sound, monitors, concessions and layout. Bringing the Spring Invasion Tour to town is one of many big plans for the venue and its future.

Starting of the night of metal was, Kansas City local band, Fear My Name. The group is made up of Trent Piatek on guitar, Nate Deily on vocals, Dorian Dolore on bass, and Allen Stone on drums. Opening the show for such well received bands is no easy task and Fear My Name, who are obvious fans and influenced by the likes of MIW were a great fit to the lineup and came ready to burn the roof down.

A young and upcoming straight in your face metal band, Fear My Name seem to have something to prove as they brought every bit of energy they could muster. Riding high off their newest single “Betrayer” and bringing a hard crunch sound with an almost death metal vocal, Deily did all he could to energize the crowd and despite the crowd’s lackluster response he didn’t let that kill his energy. While most of the crowd might not have felt Fear My Name at the beginning of their set, there is no doubt new fans were made by sets end.

Next in the lineup was Huntington Beach, California-based band Atreyu. Named for the character of the same name from Michael Ende’s fantasy book The Neve ending Story and formed in 1998, Atreyu is no stranger to the stage or success. They have earned a large fan base with seven studio albums , their latest being the 2018 release “In Our Wake” that reached number 2 on the US Billboard Top Hard Rock albums.

Atreyu bring a unique and ever growing sound that crosses many of the subgenres of hard rock and metal. The group is made up of the dueling vocals of lead singer Alex Varkatzas with his scream/growl style and drummer Brandon Saller who brings clean singing style vocals. Atreyu is highlighted by the dueling guitars of Dan Jacobs and Travis Miguel with Porter McKnight on the hard thumping bass. Atreyu came to The Complex to bring the house down with a fan favorite stacked set list including tracks “The Time is Now,” “Becoming The Bull,” “Ex’s and Oh’s,” and an instant fan singalong with Bon Jovi cover “You Give Love A Bad Name” that highlighted the stylings of Saller.

Each member of Atreyu brings a force to the stage that is necessary to harness the explosive and show stealing talents of Saller. Not to sell any members short as they play off each other perfectly on the stage, it is no doubt that Saller is the attention grabber of the band. Not letting the energy settle for even a second, Atreyu with their 15 song set list, grabbed every fan by the horns and brought a fun party metal feel to the stage. One of the most exciting moments of the night belonged to bass player McKnight as he took to the crowd and started a circle pit around him as he played. With tracks “Anger Left Behind,” “Bleeding Mascara,” “Blow,” and the closer “Lip Gloss and Black,” Atreyu had no problem leaving the crowd pumped for the headliner.

The wildest show I have ever witnessed at The Complex was a Motionless In White show, so when this lineup was announced expectations were high for an exciting show. Motionless In White know how to bring the excitement as they have rocked both the small stage and the big stage. The anticipation was high and the lines long as all the MIW VIP’s were sold out and fans filled the sidewalk early for the chance to get close. A Scranton, Pennsylvania band formed in 2005, MIW is no stranger to lineup changes and currently consists of vocalist Chris Motionless, guitarist Ricky Horror, guitarist Ryan Sitkowski and drummer Vinny Mauro.

Motionless In White have never tried to fit in any genre or fit any mold for what a show should be, they merely just come to fire up a crowd and get the heads banging and horns flying. They kicked off the night with their brand new track “Disguise,” off the album of the same name due out June 7. It was a bold choice rewarded by the deafening cheers of the crowd. They wasted no time and jumped right into “Reincarnate” a fan favorite from their last album which continued to amp up the crowd.

The group made sure to sprinkle in many fan favorites like “Queen for Queen” and “Sick from the Melt.” MIW may not have big stage show accessories fans have become used to, but they took the opportunity of an intimate show on a small stage to give it their all and connect with their fans. Despite not selling out, the energy was still high.

MIW have released two singles for the upcoming release of “Disguise,” their sixth studio album. The band played “Brand New Numb,” the second single, and gave the masses a taste of what’s to come. Performed live the track immediately got the crowd fired up and no doubt pushed preorders up. Closing out the set with “Devils Night” and making sure to thank all the bands and all the fans, MIW proved that they are hitting the scene harder than ever and look to have a great summer as anticipation for the new album is through the roof.