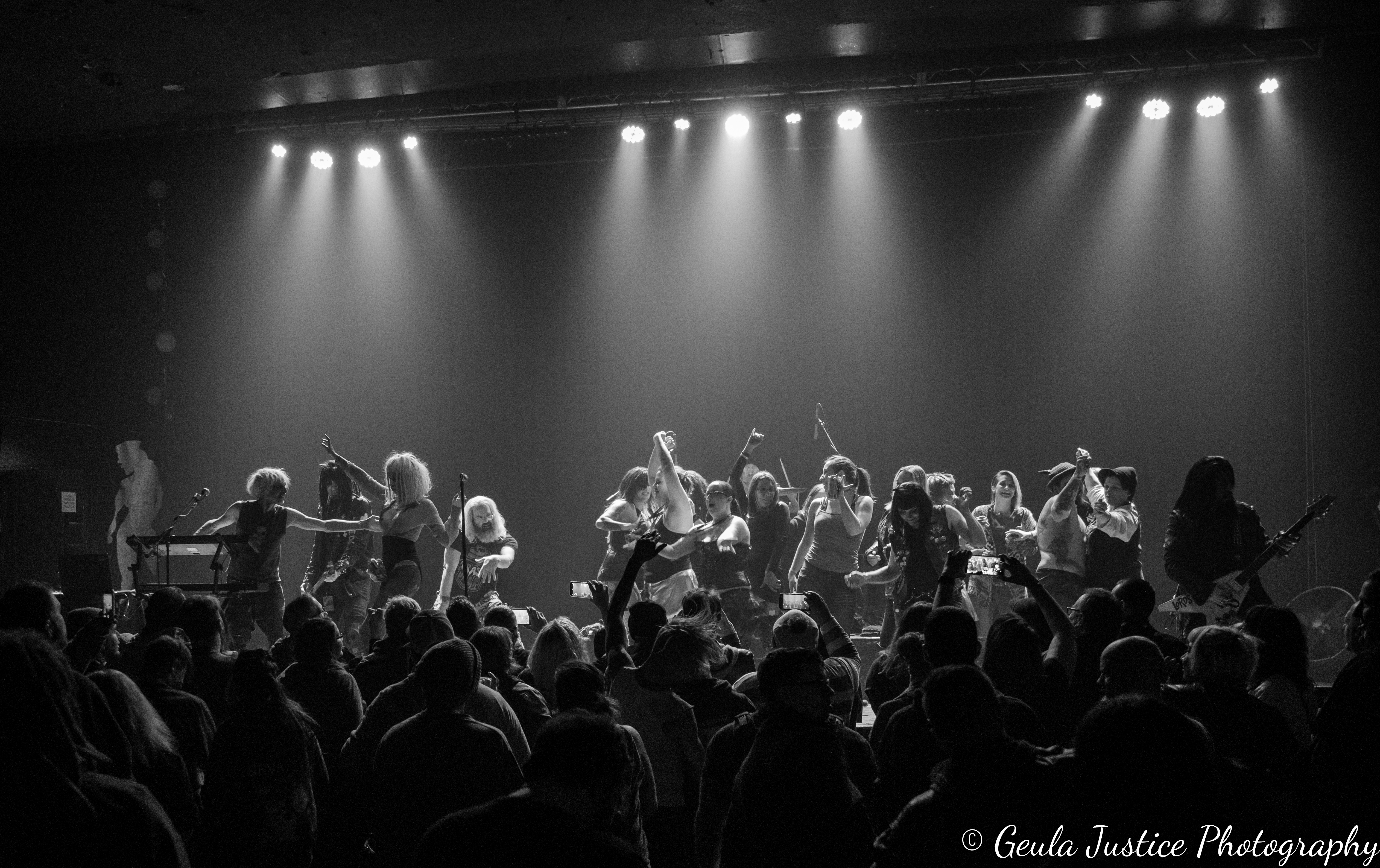 Pretty in Kink Tour turns the heat up at The Granada

Kicking off the night of debauchery, depravity, lewdness and straight up glorious perversion was the Minneapolis, Minn.- based band Gabriel and the Apocalypse. A brain child of lead vocalist Lindy Gabriel and with a look right out of a D.C. comic book asylum, Gabriel and the Apocalypse were a very pleasant and slightly disturbing surprise. Comprised of an eerie looking foursome of slightly of tilt gentlemen that looked like they escaped from said asylum, the Apocalypse had a great sound. Joey Connelly on guitars, Zach Williams on drums, Jake Lacore on guitars and Figgles McGee on keyboards made quite the impression.

With some rather unorthodox means of firing up the crowd, including antics of the depraved and demented, the men of the Apocalypse backed it up with a good musicianship and killer skirts. Gabriel is an aggressive female vocalist who rocks a mistress of the dark look and a hauntingly beautiful vocal range. Winning fans over with tracks from their latest album “The Ghost Parade,” GaTA opened the show perfectly and set the stage for what would be a night of dominant commanding women.

Next on the bill and was an act that fit so perfectly in a tour of Kink. The sultry, sexy, fiery, powerhouse female foursome, heavy metal burlesque dance group Little Miss Nasty. The group was founded by mother Nasty, lead bad girl herself Gina Katon and producer, writer, musician and all around badass Marc “got moves like Jager” Jordan. Central Mo News got to sit down with Katon and Jordan and have a chat on all things Nasty and rock and roll. Katon told us about her newest touring nasty girls that she brought along with her – Jesse Ohera-Aweau, Talitha Thurston, and Dina Auneau, and told us that even early in the tour she was feeling really good about the energy and bond the ladies were making.

We talked about how much LMN has grown from their first big tour with In This Moment into three residencies including Long Beach, Calif., Santa Monica, Calif., and their biggest to date their new home Hooters Casino in Las Vegas where they perform three nights a week. When asked about the “haters” that such an openly sexual and erotic show bring with it Katon said “I just educate them on how hard the ladies work and how they give everything to their performance. It’s more than just about being sexy, it’s about female empowerment and women taking back control of their sexiness.”

As the stage goes dark and the ladies of LMN sauntered into place on stage dawning ski masks, short plaid skirts, garters, high heels and an urge to show off their beauty and talent the crowd instantly went crazy with cat calls and cheers as LMN kick into their first act. An unbelievably sexy and well-choreographed dance number proved the ladies have no modesty when it comes to showing of their assets. LMN utilize all the aspects of some of the greatest metal songs from then and now and waste no time in stripping down to even more reveling outfits including perfectly placed electrical tape and just melt the audience with precision timing, energy, attitude and nothing short of the hottest dance stage show in the business.

From come-hither crawls to sensuous splits that take your breath away, LMN are in your face with all that is arousing and alluring and are perfect for a right on the stage rail experience. Just as they give the audience about all it can handle and have them whipped into a furry, in what would be just the first act, LMN make it known that second act even hotter.

With no clue what to expect from the next performers, Genitorturers is a group that indulges in everything that comes with a flamboyant BDSM-themed industrial metal show. The group consists of Eric Griffin on guitar, Kriz DK on drums, Ryan Seelbach on bass and the over the top style of lead vocalist Gen. Genitorturers is everything that is great about shock rock and brings a stage show that has the purpose of leaving the audience picking up their jaw. Musically they back up all their beautiful gimmick having a great sound and good head banging tunes but it is their stage show that leaves the impression.

From Gen starting the show in fishnets, sexy leotard and leather face mask, to faceless murdered nurses, and my personal favorite – a ten-foot-tall, bare breasted devil. With horns, wings, claws, and a large shot of liquor spewing penis, the devil drove the crowd wild. Fans got more excited as Gen led the devil from audience member to audience member offering shots of devil juice direct from the tap.

Genitorturers are an easy metal band to bounce and jam to and while some music might get lost in a show of this imagination theirs does not as it highlights a very unusual show perfectly. They give everything in a show , Gen’s costumes with hoses coming from everywhere, sexy topless dancers with hypnotic faces, crotch-grinding spark-flying characters, all put to some well-played fast paced down and dirty metal. To fully describe all that is a Genitorturers show would take far more talent than I can muster and are a band that can only be experienced live and one you will never forget

Not many could follow such a show, which is why Little Miss Nasty is tapped for two acts on this tour. Starting off the show on well-placed bars, the ladies took their places in even more reveling outfits and take the breath away from all in attendance as they start their show. Dancing and telling a story to songs by artist such as Korn, In This Moment, and Rage against the Machine, the ladies of LMN bring out all the stops in act two with stage melting sexiness. It’s no wonder when you see the talent and moves the ladies possess that Katon has special dance clinics to help unleash your inner sex kitten.

LMN’s second act is definitely not for the faint of heart as the ladies will have your pulse rate through the roof. LMN is an experience filled with top notch, professionally trained dancers in high demand throughout the world; the group has taken over everywhere and every stage they grace. Giving the ladies a short break Gina of Gina and the Eastern Block performed her hit song “Sippin of a Forty” setting the stage for their last bit of eye popping, fast paced, never to be forgotten, in your face style. Little Miss Nasty is everything you want in sex, power, talent and passion for a show.

Finally, the time had come for the band we all had to thank for such a great show, the iconic Lords of Acid. They are an American/Belgian electronic style group led by the only constant member killer musician Praga Khan. Khan helped create and has kept alive the Lords and helped them reach success with many hits and soundtracks including Austin Powers: The Spy Who Shagged Me, Sliver, and Strange Days.

With multiple lineup changes and on its current incarnation including Praga Khan on keyboards, programming, and backing vocals, Galen Waling on drums, Marieke Bresseleers on lead vocals, DieTrich Thrall on bass, and Sin Quirin on guitars. Not to sell any one the band short as they were all fantastic musicians but the easy highlight and draw of their show is the amazingly talented and young front woman Marieke Bresseleers.

She was a show within herself with the voice of an angel and power to match. Bresseleers was such a joy to listen to and watch as she took all the songs of sex and debauchery that the Lords are known for and made them her own. Bresseleers invited women out of the crowd to help heat up the stage as she sang and flirted with them – or singing with blow up dolls from the crowd in accordance to “Lords rules.”

I cannot express how blown away the crowd was from the vocal stylings and stage presence of Bresseleers as she stole the show from her band. Khan could not have picked a better front woman to bring on her first tour of the states, as she gave a new life to classic Lords of Acid tracks. I look forward to hearing more from her in the future.

The Pretty in Kink Tour 2019 started in Phoenix in late February and runs through the end of March finishing off in Las Vegas. While not a family show by any means, it is a not to be missed night of pure provocative, racy, risqué and titillating entertainment with great music played by seasoned  professionals.