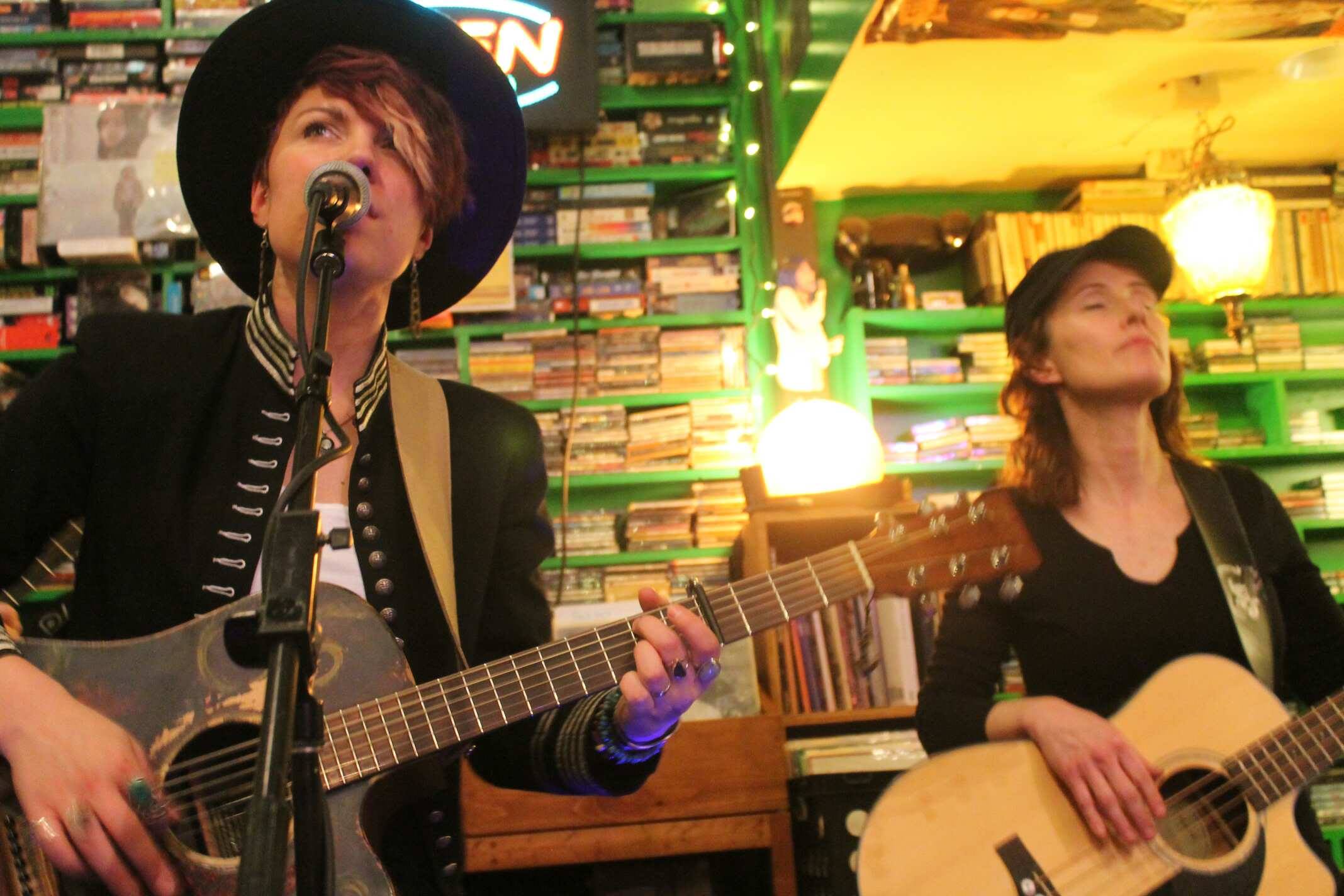 Violet and the Undercurrents set sail with ‘The Captain’

Last Friday, March 1, was a special night for Violet and the Undercurrents, the long-running indie rock band of Columbia, Mo. The band is Violet Vonder Harr on guitar and lead vocals , Phylshawn Johnson on drums , Linda Bott on bass , and Lizzy Weiland on guitar.

The band’s been around for an estimated eight years, with Johnson and Vonder Harr making up the heart and soul of the group, while during the band’s duration, previous members have jumped ship, and new members have come aboard, leading to the current lineup.

As nightfall descended, downtown Columbia was experiencing a greater amount of hustle and bustle because of the annual True/False Film Festival.

Meanwhile, around 30 souls were nestled into Hitt Records, as Violet and the Undercurrents delivered their soul-stirring, heartfelt sounds on what was the release date of the new album “The Captain.”

“‘The Captain’ is an album we’ve been working on for the last two and a half years,” Vonder Harr said. “It’s a concept album based around this character, The Captain, who is somebody who is passionate about something and is driven about something, trying to find a balance between the passion and the ambition.”

When listening to the album the craft, work, and dedication involved becomes obvious right from the start, as the journey into a cornucopia of sound unfolds.

The disc starts with “Alone Together,” the guitar work on this one brings to mind surf rock, with so many chords encased in reverb that seem to linger in the air. Lyrics conveying feelings of camaraderie and disconnect are perfectly placed between one another in the song.

“It’s everyone for themselves. We’re all alone in this together and we can’t get out.”

The vocals on this chorus are belted out like a torch singer, invoking some sort film noir fatalism.

The second track “Patience” is more up tempo, sounds less loungey and seems to draw influence from ’70s AM radio fare – on this one Violet Vonder Harr sounds like equal parts Carly Simon and Ani DiFranco.

The lyrics are inspiring encouragements and affirmations to carry on when the course you are on gets a little bumpier than you might have expected.

“Don’t drop the anchor. Don’t give up this fight…We just gotta make it through another night.”

The entire album is stellar. One example of a standout track is “Still Here.”

The song differs from the other songs on the album, with more introspective personal tales. “Still Here” is a political song, yet not overtly political in the way “Four Dead in Ohio” by Crosby Stills & Nash is overtly political. No specific events are referenced, no specific ideologies are endorsed nor condemned – the song speaks to increased political and social division.

The video for the song, which hit the web last November, was comprised of footage from various protests, and the synching together of the visuals perfectly coincides with the themes of the song and its audio dynamics.

“I always kind of come back to social issues, even from the time I was a teenager,” Vonder Harr stated. “I’ve always tried to write from a space of ‘I never want to offend anybody, I never want to alienate anybody.’ I think we are all a part of this same global family, this human family. There’s been so much division in the last several years. Really what the video is is a collection of what’s been happening in the last several years, and you can take from it what you want, what you will.”

Johnson elaborated on the connection between the audio dynamics of the song and the visuals within the video.

“We wanted to create a track that had a lot of dynamics to it, to where you could feel a rush of sound come over you at different points, so it was fun in the studio, just kind of experimenting with how to play with dynamics in a way that weren’t necessarily louder but filling out sounds in different ways, with different instruments,” Johnson said. “Our goal with the entire album was to make it emotional and tell a story and to paint a picture that was also very vivid if you had that kind of visual connection but also just for sound.”

As the sounds of Violet and the Undercurrents playing the entirety of the new album from start to finish live filled Hitt Records, those who had gathered showed their love and appreciation, most clapped and cheered, and a few danced in the aisles.

The appreciation that those in the CoMo music scene have for Violet and the Undercurrents was displayed by the joyous responses.

“At the heart of the Columbia scene is a local appreciation, and that goes beyond music, that goes to local beer, and local food, and local farming, and local marketing,” Johnson commented. “Our town doesn’t have an industry for a complete music scene as far as getting your CDs replicated and getting PR and all of those other detail things, but we do have a really strong venue scene, as well as an original music scene.”

Although Violet and the Undercurrents are part of the Columbia music scene, their scope and vision extends beyond.

The day after the in-store at Hitt Records, the band did an in store performance at Mills Record Company in Kansas City, Mo.

These performances served as launching points for their upcoming tour, which will go on for most of March, with stops in New Orleans, Nashville, Austin, and other locales.

“We want to connect with the people, visit all of our favorite places,” Johnson said.

Listen to our interview with Violet Vonder Harr and Phylshawn Johnson in its entirety below. For more, follow Violet and the Undercurrents on Facebook here.