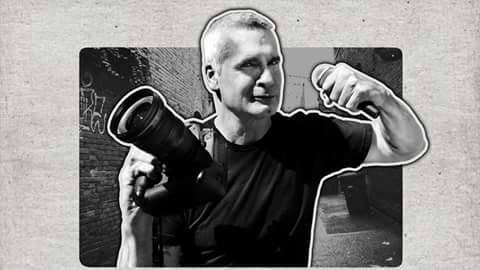 I was only a few feet away from an icon, someone who’s been an inspiration to me since age 13.

I was up front when Henry Rollins came to do a spoken word performance in Lawrence, Kan. Oct 4. at Liberty Hall. I had plenty of past opportunities to attend one of his talking shows – I just never went to one until recently.

Rollins’ current spoken word tour is a slight deviation from previous ones, it contains more than just him talking about topics. This was his Travel Slideshow, a presentation of photos as he elaborated on his travels all over the world.

Touring heavily has been a part of Rollins’ life since he became the lead singer of Black Flag in the summer of 1981. Reflections on his earliest days of hitting the highways are chronicled in the essential tome “Get in the Van,” a collection of Rollins’ writings and journal entries spanning from 1981 to 1986.

I had “Get in the Van” the audio book on CD and the print edition. I’ve listened to the audio version dozens, if not hundreds, of times. It’s such a captivating tale, not just a first person oral underground music history, but it’s also a story of strength, perseverance and growth.

Opportunity cost is a concept I first learned about in the third grade, meaning that often when going for one option you are inadvertently giving up something else. When Henry Rollins left behind the routine of his young life as a manager at Haagen-Dazs in Washington D.C., he left behind stability and found something more electric and alive.

Of course, I’ve seen videos of Rollins, and Black Flag’s “Damaged” is my all-time favorite album, so I had an idea of what his demeanor would probably be like in person. However, I was awestruck by the amount of energy that radiated off of Mr. Rollins. It was a sight to see words coming out of someone’s mouth at such a rapid pace yet containing such a sense of precision and cogency.

He opened up by telling the crowd about the first time he found himself in Lawrence, back in 1982 while on tour with Black Flag. He said he couldn’t remember the name of the venue. Knowing what I know about the “scene” history of the area, it was probably a long gone place called the Off The Wall Hall.

Rollins reminisced about the show, noting a police presence entered into the venue. Police attention and Black Flag was a frequent thing. Rollins said the police officer looked like Barney Fife and simply told them to turn it down and then left. He contrasted this cop with the more aggressive police officers he had encountered in Los Angeles and Texas.

Rollins toured all over the U.S., Canada and Europe with Black Flag, yet still had a desire for even more travel and new exploration. He shared that in the early 2000s he was traveling to many of the same types of places, a lot of it related to being on stage night after night. Yet he wanted to go farther off the worn, known path, to places without a stage waiting for him.

The first international photo for display, blown up on stage, larger than life via digital means, was a picture taken in Afghanistan. He visited the country as part of a U.S.O. tour, which also saw Rollins entertaining troops in Iraq.
Some might find that an unusual pairing, knowing Rollins was vocally opposed to George W. Bush’s wars, but the guy also acknowledged the soldiers on the ground weren’t the architects of these wars, and his name was specifically requested by troops who were fans.

Rollins’ Middle East excursion did include travel on his own, without the U.S.O., into Iran. In order to get a useable passport for the trip Rollins had to travel to Dubai first, then onto Iran.

His photo slide from Iran was a simple piece of graffiti on a wall reading “Fuck Bush.” Rollins said on his travels during this time, he would look to take pictures of anti-Bush graffiti.

Throughout the night, Rollins did not shy away from political statements and commentary. On from the Bush graffiti, he spoke of seeing stickers on vehicles during the early days of the Obama administration, with a picture of George W. Bush with attached text of “Miss Me Yet?” At the time Rollins was more interested in seeing how things were going to develop with the then new presidential administration.

“But now 10 years later, yeah, I kind of do,” Rollins remarked. Rollins said he saw a sense of decency with George W. Bush.

Throughout the night, Rollins combined touching reflections, analysis, story-telling and bits of humor. One of the most poignant moments of his presentation pertained to globalism and the proliferation of fast food around the world.

While displaying a photo of a woman in Thailand, sweeping in front of a McDonald’s, complete with a statue of Ronald McDonald, Rollins presented a jewel of a thought to the audience.

Rollins pontificated that he believes a great much of the world is speeding up, regarding things like environmentalism, renewable resources, self-care, and that the global spread of something like McDonald’s is a way to attempt to slow down the accelerated parts of the world to try and closer match the pace of America.

This was a mind blowing moment, one of those things I’d never thought of, but hearing it vocalized made sense.

The night itself was full of “oh wow” moments, just being present and hearing the stories and seeing the accompanying photos, of Thailand, Indonesia, India North Korea, South Africa and even Antarctica. Rollins said that seeing a documentary on a faraway place is just the calling card to him – the next step is to actually go.

He also spoke about linear existence and the realities of aging.

“I’m older than most of you here,” Rollins said.

Rollins communicated the notion that he feels it is preferable to travel and take the risks that might come, including the possibility of being eaten by a hippo, instead of being found dead at home, rotting away with a remote control in one’s own hand.

He urged those in the audience that if anyone has a bucket list of cities they would like to visit to get a passport and go.